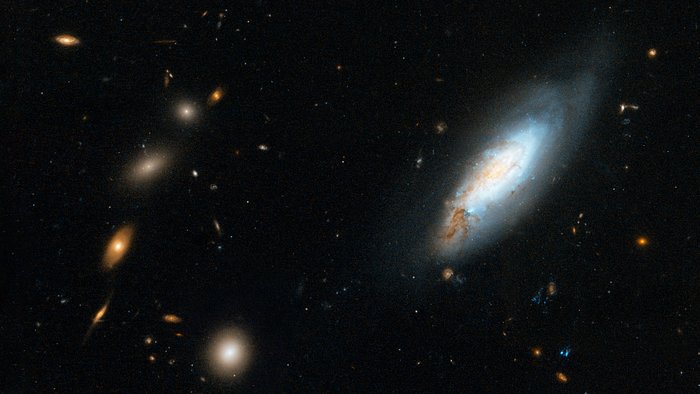 Though it has not yet been detected directly, physicists are fairly certain that dark matter must exist in some form. The way in which galaxies rotate and the degree to which light bends as it travels through the universe suggest that there's some kind of unseen stuff throwing its gravity around.

The leading idea for the nature of dark matter is that it's some kind of particle, albeit one that interacts very rarely with ordinary matter. But nobody is quite sure what a dark matter particle's properties might be because nobody has yet recorded one of those rare interactions.

Physicists from Brown University have devised a new strategy for directly detecting dark matter, the elusive material thought to account for the majority of matter in the universe.

The new strategy, which is designed to detect interactions between dark matter particles and a tub of superfluid helium, would be sensitive to particles in a much lower mass range than is possible with any of the large-scale experiments run so far, the researchers say.

"Most of the large-scale dark matter searches so far have been looking for particles with a mass somewhere between 10 and 10,000 times the mass of a proton," said Derek Stein, a physicist who co-authored the work with two of his Brown University colleagues, Humphrey Maris and George Seidel. "Below 10 proton masses, these experiments start to lose their sensitivity. What we want to do is extend sensitivity down in mass by three or four orders of magnitude and explore the possibility of dark matter particles that are much lighter."

There's been good reason, Stein says, to search in the mass range where most dark matter experiments have focused thus far. A particle in that mass range would tie up a lot of loose theoretical ends. For example, the theory of supersymmetry -- the idea that all the common particles we know and love have hidden partner particles -- predicts dark matter candidates of the order of hundreds of proton masses.

But the no-show of those particles in experiments so far has some physicists thinking about how to look elsewhere. This has led theorists to propose models in which dark matter would have much lower mass.

The detection strategy that the Brown researchers have come up with involves a tub of superfluid helium. The idea is that dark matter particles passing through the tub should, on very rare occasions, smack into the nucleus of a helium atom. That collision would produce phonons and rotons -- tiny excitations roughly similar to sound waves -- which propagate with no loss of kinetic energy inside the superfluid. When those excitations reach the surface of the fluid, they'll cause helium atoms to be released into a vacuum space above the surface. The detection of those released atoms would be the signal that a dark matter interaction has taken place in the tub.

"The last bit is the tricky part," said Maris, who has worked on similar helium-based detection schemes for other particles like solar neutrinos. The collision of a low-mass dark matter particle might result in only a single atom being released from the surface. That single atom would carry only about one milli-electron volt of energy, making it virtually impossible to detect through any traditional means. The novelty of this new detection scheme is a means to amplify that tiny, single-atom energy signature.

It works by generating an electric field in the vacuum space above the liquid using an array of small, positively charged metal pins. As an atom released from the helium surface draws close to a pin, the positively charged tip will steal an electron from it, creating a positively charged helium ion. That newly created positive ion would be in close proximity to the positively charged pin, and because like charges repel each other, the ion will fly off with enough energy to be easily detectable by a standard calorimeter, a device that detects a temperature change when a particle runs into it.

"If we put 10,000 volts on those little pins, then that ion going is going to fly away with 10,000 volts on it," Maris said. "So it's this ionization feature that gives us a new way to detect just the single helium atom that could be associated with a dark matter interaction."

This new kind of detector wouldn't be the first to use the tub-of-liquid-gas idea. The recently completed Large Underground Xenon (LUX) experiment and its successor, LUX-ZEPLIN, both use tubs of xenon gas. Using helium instead provides an important advantage in looking for particles with lower mass, the researchers say.

For a collision to be detectable, the incoming particle and the target atomic nuclei must be of compatible mass. If the incoming particle is much smaller in mass than the target nuclei, any collision would result in the particle simply bouncing off without leaving a trace. Since LUX and L-Z are intended for the detection of particles with mass greater than five times that of a proton, they used xenon, which has a nucleus of around 100 proton masses. Helium has a nuclear mass only four times that of a proton, making a more compatible target for particles with much less mass.

But even more important than the light target, the researchers say, is the ability of the new scheme to detect only a single atom evaporated from the helium surface. That kind of sensitivity would enable the device to detect the tiny amounts of energy deposited in the detector by particles with very small masses. The Brown team thinks its device would be sensitive to masses down to about twice the mass of an electron, roughly 1000 to 10,000 times lighter than the particles detectable in large-scale dark matter experiments so far.

Stein says that the first steps in actually making such a detector a reality will be fundamental experiments to better understand aspects of what's happening in the superfluid helium and the precise dynamics of the ionization scheme.

"From those fundamental experiments," Stein says, "we would craft designs for a bigger and more complete dark matter experiment."

The research was funded in part by the National Science Foundation.