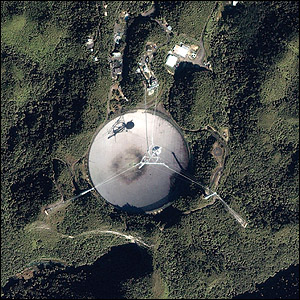 Arecibo is the largest radio-telescope in the world. It has been, and continues to be, an enormously productive scientific facility, covering a broad range of science studies. While its contributions to radio astronomy have proven valuable for the past several decades, it is its planetary radar capabilities that remain unique. Less than a century ago, a Near Earth Object (NEO) slammed into Siberia, devastating 1000 square miles. If it had struck just a few hours earlier or later in a populated area, it could have killed several hundred thousand people. NEOs pose a real and dangerous threat to Earth.

In the past few years, Arecibo has been discovering, tracking, and characterizing the comets and asteroids that travel through our neighborhood of space. Much has been learned about near-misses, the probability of collisions, the diversity of asteroid and comet physical properties, and the effects of impacts in the past.

We have even learned that one asteroid, named Apophis, will pass closer to Earth in 22 years than our geosynchronous communications satellites, and its trajectory has a small probability of taking it on a collision course with Earth seven years after that.

Radar tracking is the only way to precisely know the probability of impact, and the Arecibo telescope is the most powerful instrument for the job, 20 times more sensitive for NEO radar tracking than any other instrument in the world.

Unfortunately, Arecibo is slated to be closed by the National Science Foundation in an attempt to free up funding for new projects.

Arecibo is caught in a bureaucratic argument. The Arecibo Observatory is a National Science Foundation (NSF) operation, but they consider the subject of NEOs and planetary radar to be in NASA’s bailiwick. NASA supports ground-based astronomy, and supported the Arecibo radar for many years, but the agency now objects to picking up the funding of what is currently an NSF program.

Because of Arecibo’s powerful one-million watt transmitter, and the large 1000-foot aperture, the telescope is uniquely able to characterize potentially hazardous NEOs and determine the danger they pose. Radar signals from this facility are the only ones that can be regularly used for reaching and tracking NEOs that may be comig close to Earth.

In addition to tracking NEOs, Arecibo has returned other recent important results from planetary radar, including the best physical characterization of any potentially hazardous asteroid as large as a kilometer, ultra precise determinations of Mercury’s spin state that reveal that planet to have a molten core, and the identification of several binary asteroids in the near-Earth population.

"Unfortunately, Arecibo is slated to be closed by the National Science Foundation in a misguided attempt to free up funding for new projects that do not yet exist," said the Society's statement.

"Unlike the reindeer herders of Siberia who were taken completely unawares by that bolt from the blue, we have the ability to track and predict the danger a NEO may pose decades down the road, enough time for us to perhaps avert a catastrophic impact," said Louis Friedman, Executive Director of The Planetary Society.

The Planetary Society has urged Congress to provide the necessary support to keep the Arecibo planetary radar operating.