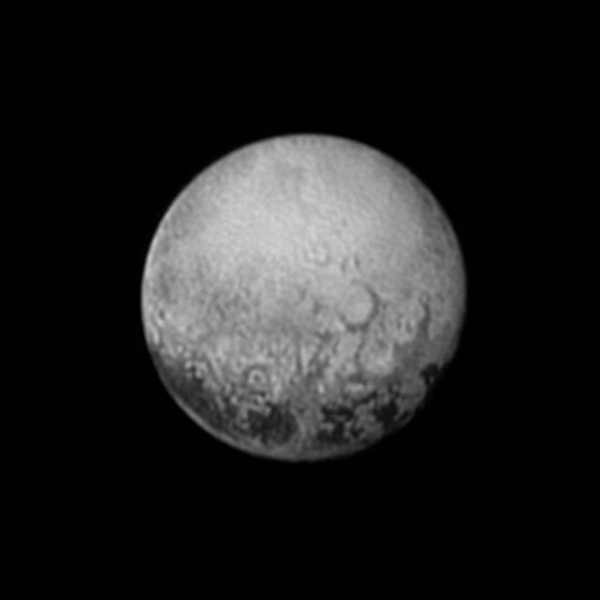 It began as a point of light. Then, it evolved into a fuzzy orb. Now, in its latest portrait from NASA's New Horizons spacecraft, Pluto is being revealed as an intriguing new world with distinct surface features, including an immense dark band known as the "whale."

As the newest black and white images from the New Horizons Long Range Reconnaissance Imager (LORRI) appeared, members of the science team reacted with joy and delight, seeing Pluto as never before. There will no doubt be many similar moments to come. New images and data are being gathered each day as New Horizons speeds closer to a July 14th flyby of Pluto, following a journey of three billion miles.

Pluto is beginning to reveal the first signs of discrete geologic features. "Among the structures tentatively identified in this new image are what appear to be polygonal features -- a complex band of terrain stretching east-northeast across the planet, approximately 1000 miles long and a complex region where bright terrains meet the dark terrains of the whale," said New Horizons principal investigator Alan Stern. "After nine and a half years in flight, Pluto is well worth the wait."

The spots appear on the side of Pluto that always faces its largest moon, Charon. Unfortunately, the face will be invisible to New Horizons when the spacecraft makes its close flyby on the morning of July 14th. New Horizons principal investigator Alan Stern of the Southwest Research Institute in Boulder, Colorado, describes this image as "the last, best look that anyone will have of Pluto's far side for decades to come."

The spots are connected to a dark belt that circles Pluto's equatorial region. What continues to pique the interest of scientists is their similar size and even spacing. "It's weird that they're spaced so regularly," says New Horizons program scientist Curt Niebur at NASA Headquarters in Washington.

Jeff Moore of NASA's Ames Research Center in Mountain View, California, is equally intrigued. "We can't tell whether they're plateaus or plains, or whether they are brightness variations on a completely smooth surface."

The large dark areas are now estimated to be 300 miles (480 kilometers) across, an area roughly the size of the state of Missouri. In comparison with earlier images, we now see that the dark areas are more complex than they initially appeared, while the boundaries between the dark and bright terrains are irregular and sharply defined.

In addition to solving the mystery of the spots, the New Horizons Geology, Geophysics, and Imaging team is interested in identifying other surface features such as impact craters, formed when smaller objects struck the dwarf planet. Moore notes, "When we combine images like this of the far side with composition and color data the spacecraft has already acquired but not yet sent to Earth, we expect to be able to read the history of this face of Pluto."

When New Horizons makes its closest approach to Pluto in just two days, it will focus on the opposing or "encounter hemisphere" of the dwarf planet. On the morning of July 14th, New Horizons will pass about 7800 miles (12,500 kilometers) from the face with a large heart-shaped feature that's captivated the imagination of people around the world.

At 7:49 AM EDT on Tuesday morning, July 14th, New Horizons will zip past Pluto at 30,800 miles per hour (49,600 kilometers per hour), with a suite of seven science instruments busily gathering data. The mission will complete the initial reconnaissance of the solar system with the first-ever look at the icy dwarf planet.