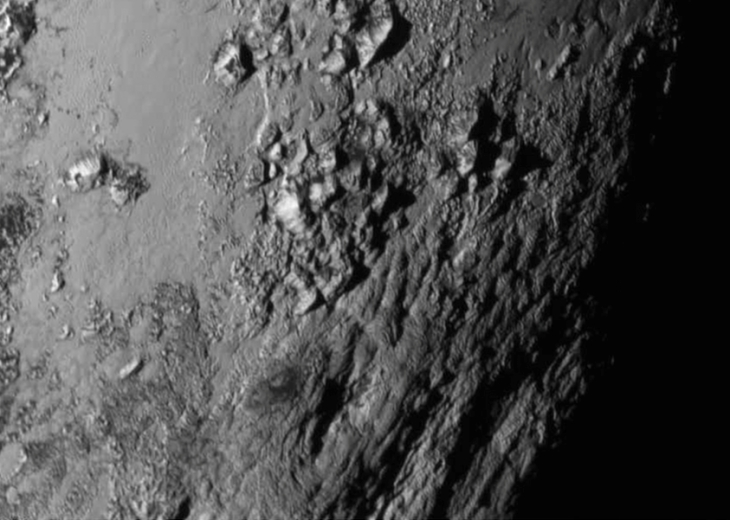 Icy mountains on Pluto and a new, crisp view of its largest moon, Charon, are among the several discoveries announced today by NASA's New Horizons team, just one day after the spacecraft's first ever Pluto flyby.

"Pluto New Horizons is a true mission of exploration showing us why basic scientific research is so important," said John Grunsfeld, associate administrator for NASA's Science Mission Directorate in Washington. "The mission has had nine years to build expectations about what we would see during closest approach to Pluto and Charon. Today, we get the first sampling of the scientific treasure collected during those critical moments, and I can tell you it dramatically surpasses those high expectations."

A new close-up image of an equatorial region near the base of Pluto's bright heart-shaped feature shows a mountain range with peaks jutting as high as 11,000 feet (3,500 meters) above the surface of the icy body.

The mountains on Pluto likely formed no more than 100 million years ago -- mere youngsters in a 4.56 billion year old solar system. This suggests the close-up region, which covers about one percent of Pluto's surface, may still be geologically active today.

"This is one of the youngest surfaces we've ever seen in the solar system," said Jeff Moore of the New Horizons Geology, Geophysics, and Imaging Team (GGI) at NASA's Ames Research Center in Moffett Field, California.

Unlike the icy moons of giant planets, Pluto cannot be heated by gravitational interactions with a much larger planetary body. Some other process must be generating the mountainous landscape.

"This may cause us to rethink what powers geological activity on many other icy worlds," says GGI deputy team leader John Spencer at SwRI.

The new view of Charon reveals a youthful and varied terrain. Scientists are surprised by the apparent lack of craters. A swath of cliffs and troughs stretching about 600 miles (1000 kilometers) suggests widespread fracturing of Charon's crust, likely the result of internal geological processes. The image also shows a canyon estimated to be 4 to 6 miles (7 to 9 kilometers) deep. In Charon's north polar region, the dark surface markings have a diffuse boundary, suggesting a thin deposit or stain on the surface.

New Horizons also observed the smaller members of the Pluto system, which includes four other moons: Nix, Hydra, Styx, and Kerberos. A new sneak-peak image of Hydra is the first to reveal its apparent irregular shape and its size, estimated to be about 27 by 20 miles (43 by 33 kilometers).

The observations also indicate Hydra's surface is probably coated with water ice. Future images will reveal more clues about the formation of this and the other moon billions of years ago. Spectroscopic data from New Horizons' RALPH instruments reveal an abundance of methane ice, but with striking differences among regions across the frozen surface of Pluto.

Views of Pluto Through the Years -- This animation combines various observations of Pluto over the course of several decades. The first frame is a digital zoom-in on Pluto as it appeared upon its discovery by Clyde Tombaugh in 1930 (image courtesy Lowell Observatory Archives). The other images show various views of Pluto as seen by NASA's Hubble Space Telescope beginning in the 1990s and NASA's New Horizons spacecraft in 2015. The final sequence zooms in to a close-up frame of Pluto released on July 15, 2015. (Video Credit: Lowell Observatory Archives, NASA)