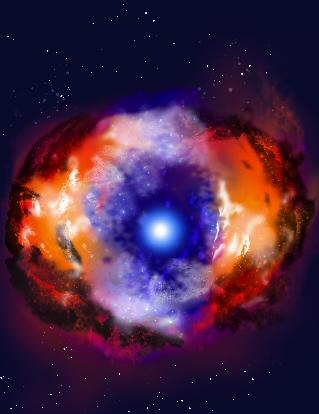 The accompanying artist's impression shows the newly discovered nebula around the black hole or neutron star in the center is shown in blue, and is in the center of the expanding, fragmented shell of material thrown off in the supernova explosion, which is shown in red.

Astronomers using a global combination of radio telescopes to study a stellar explosion some 30 million light-years from Earth have likely discovered either the youngest black hole or the youngest neutron star known in the Universe. Their discovery also marks the first time that a black hole or neutron star has been found associated with a supernova that has been seen to explode since the invention of the telescope nearly 400 years ago.

A supernova is the explosion of a massive star after it exhausts its supply of nuclear fuel and collapses violently, rebounding in a cataclysmic blast that spews most of its material into interstellar space. What remains is either a neutron star, with its material compressed to the density of an atomic nucleus, or a black hole, with its matter compressed so tightly that its gravitational pull is so strong that not even light can escape it.

A team of scientists studied a supernova called SN 1986J in a galaxy known as NGC 891. The supernova was discovered in 1986, but astronomers believe the explosion actually occurred about three years before. Using the National Science Foundation's Very Long Baseline Array (VLBA), Robert C. Byrd Green Bank Telescope (GBT), and Very Large Array (VLA), along with radio telescopes from the European VLBI Network, they made images that showed fine details of how the explosion evolves over time.

"SN 1986J has shown a brightly-emitting object at its center that only became visible recently. This is the first time such a thing has been seen in any supernova," said Michael Bietenholz, of York University in Toronto, Ontario. Bietenholz worked with Norbert Bartel, also of York University, and Michael Rupen of the National Radio Astronomy Observatory (NRAO) in Socorro, New Mexico, on the project. The scientists reported their findings in the June 10 edition of Science Express.
"A supernova is likely the most energetic single event in the Universe after the Big Bang. It is just fascinating to see how the smoke from the explosion is blown away and how now after all these years the fiery center is unveiled. It is a textbook story, now witnessed for the first time," Bartel said.

Analysis of the bright central object shows that its characteristics are different from the outer shell of explosion debris in the supernova.

"We can't yet tell if this bright object at the center is caused by material being sucked into a black hole or if it results from the action of a young pulsar, or neutron star," said Rupen.

"It's very exciting because it's either the youngest black hole or the youngest neutron star anybody has ever seen," Rupen said. The youngest pulsar found to date is 822 years old.

Finding the young object is only the beginning of the scientific excitement, the astronomers say.

"We'll be watching it over the coming years. First, we hope to find out whether it's a black hole or a neutron star. Next, whichever it is, it's going to give us a whole new view of how these things start and develop over time," Rupen said.

For example, Rupen explained, if the object is a young pulsar, learning the rate at which it is spinning and the strength of its magnetic field would be extremely important for understanding the physics of pulsars.

The scientists point out that it will be important to observe SN 1986J at many wavelengths, not just radio, but also in visible light, infrared and others.

In addition, the astronomers also now want to look for simiilar objects elsewhere in the Universe.