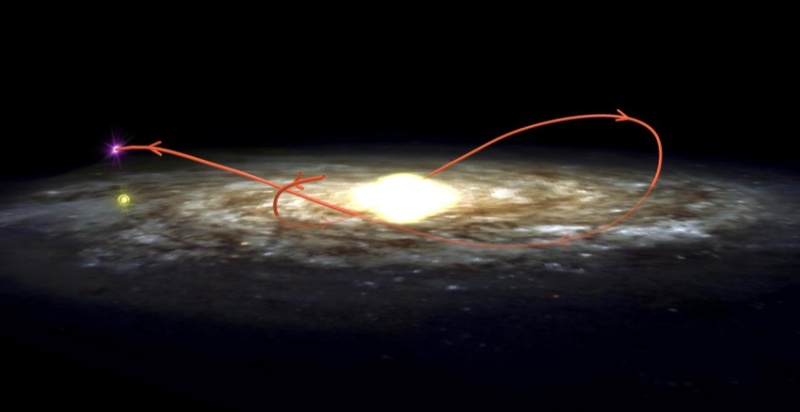 Recent calculations by Ryan O'Leary and Avi Loeb (Harvard-Smithsonian Center for Astrophysics) suggest that hundreds of massive black holes left over from the galaxy-building days of the early universe may wander the Milky Way.

Good news, however: The Earth is safe. The closest rogue black hole should reside thousands of light-years away.

Astronomers are eager to locate them, though, for the clues they will provide to the formation of the Milky Way.

"These black holes are relics of the Milky Way's past," said Loeb. "You could say that we are archaeologists studying those relics to learn about our galaxy's history and the formation history of black holes in the early universe."

According to theory, rogue black holes originally lurked at the centers of tiny, low-mass galaxies. Over billions of years, those dwarf galaxies smashed together to form full-sized galaxies like the Milky Way.

Each time two proto-galaxies with central black holes collided, their black holes merged to form a single, "relic" black hole. During the merger, directional emission of gravitational radiation would cause the black hole to recoil. A typical kick would send the black hole speeding outward fast enough to escape its host dwarf galaxy, but not fast enough to leave the galactic neighborhood completely. As a result, such black holes would still be around today in the outer reaches of the Milky Way halo.

Hundreds of rogue black holes should be traveling the Milky Way's outskirts, each containing the mass of 1,000 to 100,000 suns. They would be difficult to spot on their own because a black hole is visible only when it is swallowing, or accreting, matter.

One telltale sign could mark a rogue black hole: a surrounding cluster of stars yanked from the dwarf galaxy when the black hole escaped. Only the stars closest to the black hole would be tugged along, so the cluster would be very compact.

Due to the cluster's small size on the sky, appearing to be a single star, astronomers would have to look for more subtle clues to its existence and origin. For example, its spectrum would show that multiple stars were present, together producing broad spectral lines. The stars in the cluster would be moving rapidly, their paths influenced by the gravity of the black hole.

"The surrounding star cluster acts much like a lighthouse that pinpoints a dangerous reef," explained O'Leary. "Without the shining stars to guide our way, the black holes would be all but impossible to find."

The number of rogue black holes in our galaxy depends on how many of the proto-galactic building blocks contained black holes at their cores, and how those proto-galaxies merged to form the Milky Way. Finding and studying them will provide new clues about the history of our galaxy.

Locating the star cluster signposts may turn out to be relatively straightforward.

"Until now, astronomers were not searching for such a population of highly compact star clusters in the Milky Way's halo," said Loeb. "Now that we know what to expect, we can examine existing sky surveys for this new class of objects."