Saturn Seen From Far and Near 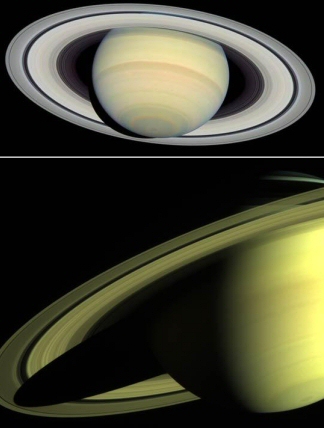 As Saturn grows closer through the eyes of the Cassini spacecraft, which is hurtling toward a rendezvous with the ringed world on June 30 (July 1, Universal Time), both Cassini and the Earth-orbiting Hubble Space Telescope snapped spectacular pictures of the planet and its magnificent rings.

Cassini is approaching Saturn at an oblique angle to the Sun and from below the ecliptic plane. Cassini has a very different view of Saturn than Hubble's Earth-centered view. For the first time, astronomers can compare views of equal sharpness of Saturn from two very different perspectives.

The view from Hubble, taken on March 22, 2004, is so sharp that many individual Saturnian ringlets can be seen. When Cassini returned its picture of Saturn on May 16, it was so close to the planet that the imaging science subsystem narrow-angle camera could not fit the whole planet in its field-of-view. Cassini is still about 20 million kilometers (about 12.4 million miles) away and only 36 days from reaching Saturn.

Hubble's exquisite optics, coupled with the high resolution of its Advanced Camera for Surveys, allow it to take pictures of Saturn which are nearly as sharp as Cassini's, even though Hubble is nearly a billion miles farther from Saturn than Cassini. Cassini will ultimately far exceed the resolution of Hubble during its close encounter with Saturn. Cassini's sharpness began to surpass Hubble's when it came to within 23 million kilometers (14 million miles) of Saturn earlier this month.

Camera exposures in four filters (blue, blue-green, green and red) were combined to form the Hubble image, to render colors similar to what the eye would see through a telescope focused on Saturn. The subtle pastel colors of ammonia- methane clouds trace a variety of atmospheric dynamics. Saturn displays its familiar banded structure, and haze and clouds of various altitudes. Like Jupiter, all bands are parallel to Saturn's equator. Even the magnificent rings, at nearly their maximum tilt toward Earth, show subtle hues, which indicate the trace chemical differences in their icy composition.

Cassini has two cameras, a wide angle and narrow angle. This narrow angle image was made using a combination of three filters (red, green, blue) and was taken at a range of 24.3 million kilometers (15.1 million miles). The view is from 13 degrees below the equator. Enceladus, one of Saturn’s 31 known moons, appears near the south pole at the bottom of the image.

The color differences between the Hubble and Cassini images are mainly due to the different sets of filters used.

More than two decades have passed since a spacecraft last visited Saturn -- NASA's Voyager-2 flew by Saturn in August 1981. Since 1990, Hubble has produced high-resolution Saturn images, tracking storms and auroral activity while providing crisp views of the rings over time and from various angles.

Cassini will begin a four-year mission in orbit around Saturn when it arrives on June 30, 2004 (July 1, 2004 Univeral Time). Six months later it will release its piggybacked Huygens probe for descent through Titan's thick atmosphere.

The Space Telescope Science Institute is operated by the Association of Universities for Research in Astronomy, Inc., for NASA, under contract with the Goddard Space Flight Center, Greenbelt, Md. The Hubble Space Telescope is a project of international cooperation between NASA and the European Space Agency. The Cassini-Huygens mission is a cooperative mission of NASA, the European Space Agency and the Italian Space Agency. The Jet Propulsion Laboratory, a division of the California Institute of Technology in Pasadena, manages the mission for NASA's Office of Space Science, Washington, D.C. The Cassini orbiter and its two onboard cameras were designed, developed and assembled at JPL.

Hubble images and additional information on Hubble are available at: http://hubblesite.org/news/2004/18

Cassini images and information is available at: http://saturn.jpl.nasa.gov.