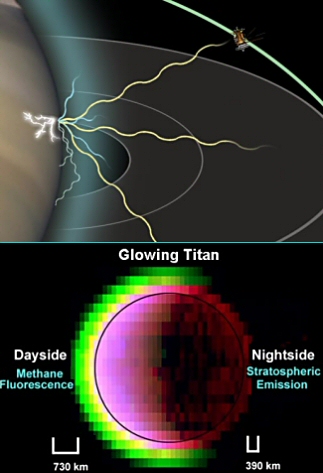 The spacecraft's radio and plasma wave science instrument detected radio waves generated by lightning. "We are detecting the same crackle and pop one hears when listening to an AM radio broadcast during a thunderstorm," said Dr. Bill Kurth, deputy principal investigator on the radio and plasma wave instrument, University of Iowa, Iowa City. "These storms are dramatically different than those observed 20 years ago."

Cassini finds radio bursts from this lightning are highly episodic. There are large variations in the occurrence of lightning from day to day, sometimes with little or no lightning, suggesting a number of different, possibly short-lived storms at middle to high latitudes. Voyager observed lightning from an extended storm system at low latitudes, which lasted for months and appeared highly regular from one day to the next.

The difference in storm characteristics may be related to very different shadowing conditions in the 1980s than are found now. During the Voyager time period when lightning was first observed, the rings cast a very deep shadow near Saturn's equator. As a result, the atmosphere in a narrow band was permanently in shadow -- making it cold -- and located right next to the hottest area in Saturn's atmosphere. Turbulence between the hot and cold regions could have led to long-lived storms. However, during Cassini's approach and entry into Saturn's orbit, it is summer in the southern hemisphere and the ring shadow is distributed widely over a large portion of the northern hemisphere, so the hottest and coldest regions are far apart.

A major finding of the magnetospheric imaging instrument is the discovery of a new radiation belt just above Saturn's cloud tops, up to the inner edge of the D-ring. This is the first time that a new Saturnian radiation belt has been discovered with remote sensing.

This new radiation belt extends around the planet. It was detected by the emission of fast neutral atoms created as its magnetically trapped ions interact with gas clouds located planetward of the D-ring, the innermost of Saturn's rings. With this discovery, the radiation belts are shown to extend far closer to the planet than previously known.

"This new radiation belt had eluded detection by any of the spacecraft that previously visited Saturn. With its discovery we have seen something that we did not expect, that radiation belt particles can 'hop' over obstructions like Saturn's rings, without being absorbed by the rings in the process," said Dr. Donald G. Mitchell, instrument scientist for the magnetospheric imaging instrument at the Johns Hopkins University Applied Physics Laboratory, Laurel, Md.

"Not only is Titan putting on a great light show but it is also teaching us more about its dense atmosphere," said Dr. Kevin Baines, science team member for the visual and infrared mapping spectrometer at JPL. "What is amazing is that the size of this glow or emission of gases is a sixth the diameter of the planet."

The Sun-illuminated fluorescent glow of methane throughout Titan's upper atmosphere ? revealing the atmosphere's immense thickness and extending more than 700 kilometers (435 miles) above the surface, was expected. However, the nighttime glow, persistently shining over the night side of Titan, initially surprised scientists.

"These images are as if you were seeing Titan through alien eyes. Titan glows throughout the near-infrared spectrum. If you were an alien it would be hard to get a good night's sleep on Titan because the light would always be on," said Baines.

For the latest images and more information about the Cassini- Huygens mission, visit: http://www.nasa.gov/cassini.