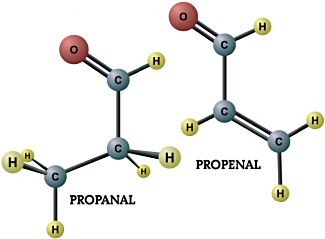 A team of scientists using the National Science Foundation's Robert C. Byrd Green Bank Telescope (GBT) has discovered two new molecules in an interstellar cloud near the center of the Milky Way Galaxy. This discovery is the GBT's first detection of new molecules, and is already helping astronomers better understand the complex processes by which large molecules form in space.

"Though very rarefied by Earth standards, these interstellar clouds are the sites of complex chemical reactions that occur over hundreds-of-thousands or millions of years," said Jan M. Hollis of the NASA Goddard Space Flight Center in Greenbelt, Md. "Over time, more and more complex molecules can be formed in these clouds. At present, however, there is no accepted theory addressing how interstellar molecules containing more than 5 atoms are formed."

Hollis collaborated with Anthony Remijan, also of NASA Goddard; Frank J. Lovas of the National Institute of Standards and Technology in Gaithersburg, Md.; Harald Mollendal of the University of Oslo, Norway; and Philip R. Jewell of the National Radio Astronomy Observatory (NRAO) in Green Bank, W.Va. Their results were accepted for publication in the Astrophysical Journal Letters.

In the GBT experiment, three aldehyde molecules were observed and appear to be related by simple hydrogen addition reactions, which probably occur on the surface of interstellar grains. An aldehyde is a molecule that contains the aldehyde group (CHO): a carbon atom singly bonded to a hydrogen atom and double-bonded to an oxygen atom; the remaining bond on that same carbon atom bonds to the rest of the molecule.

After these molecules are formed on interstellar dust grains, they may be ejected as a diffuse gas. If enough molecules accumulate in the gas, they can be detected with a radio telescope. As the molecules rotate end-for-end, they change from one rotational energy state to another, emitting radio waves at precise frequencies. The "family" of radio frequencies emitted by a particular molecule forms a unique "fingerprint" that scientists can use to identify that molecule. The scientists identified the two new aldehydes by detecting a number of frequencies of radio emission in what is termed the K-band region (18 to 26 GHz) of the electromagnetic spectrum.

"Interstellar molecules are identified by means of the frequencies that are unique to the rotational spectrum of each molecule," said Lovas. "These are either directly measured in the laboratory or calculated from the measured data. In this case we used the calculated spectral frequencies based on an analysis of the literature data."

Molecules with the aldehyde group are particularly interesting since several biologically significant molecules, including a family of sugar molecules, are aldehydes.

"The GBT can be used to fully explore the possibility that a significant amount of prebiotic chemistry may occur in space long before it occurs on a newly formed planet," said Remijan. "Comets form from interstellar clouds and incessantly bombard a newly formed planet early in its history. Craters on our Moon attest to this. Thus, comets may be the delivery vehicles for organic molecules necessary for life to begin on a new planet."

Laboratory experiments also demonstrate that atomic addition reactions -- similar to those assumed to occur in interstellar clouds -- play a role in synthesizing complex molecules by subjecting ices containing simpler molecules such as water, carbon dioxide, and methanol to ionizing radiation dosages. Thus, laboratory experiments can now be devised with various ice components to attempt production of the aldehydes observed with the GBT.

"The detection of the two new aldehydes, which are related by a common chemical pathway called hydrogen addition, demonstrates that evolution to more complex species occurs routinely in interstellar clouds and that a relatively simple mechanism may build large molecules out of smaller ones. The GBT is now a key instrument in exploring chemical evolution in space," said Hollis.

The GBT is the world's largest fully steerable radio telescope; it is operated by the NRAO.

"The large diameter and high precision of the GBT allowed us to study small interstellar clouds that can absorb the radiation from a bright, background source. The sensitivity and flexibility of the telescope gave us an important new tool for the study of complex interstellar molecules," said Jewell.