Searching for the end of the cosmic dark ages with GMOS 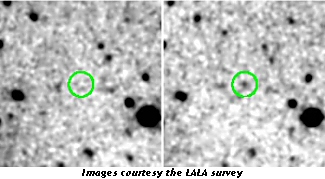 LALA J142442.24+353400.2, named for the survey in which it was discovered and its celestial coordinates, lies at a redshift of 6.535, which puts it 12.8 billion light-years away and appearing as it looked some 850 million years after the Big Bang. This faint, distant galaxy is fabricating stars at a rate of more than 11 solar masses per year, a frenetic pace among galaxies at this distance and epoch in the early universe. Astronomers traced the galaxy’s starburst activity by measuring light emitted in the so-called Lyman-alpha emission line, using deep multi-object spectroscopy conducted at Gemini Observatory with GMOS-N and the Keck Observatory with the Deep Imaging Multi-object Spectrograph (Deimos).

The galaxy was first identified in the Large Area Lyman Alpha (“LALA”) survey, a deep imaging survey conducted at the Kitt Peak National Observatory using the CCD Mosaic-1 camera at the 4-meter Mayall Telescope (Figure 1). LALA is one of the largest surveys to search for very distant galaxies detected by their Lyman-alpha emission lines. Lyman-alpha arises from hydrogen gas that is ionized by hot, young stars in these galaxies. Such line-emitting galaxies are identified by comparing their images in narrow bandpass filters from the LALA survey to broad-band filter images from both LALA and the NOAO Deep Wide Field Survey (led by coauthors Buell Jannuzi and Arjun Dey).

The properties of this line can be used to study the reionization process because neutral intergalactic hydrogen should scatter Lyman alpha light, hiding it from view in much the same way that a morning fog can obscure the Sun. The authors explore whether unusual effects in the gas within or around LALA J142442.24+353400.2 could facilitate the escape of Lyman-alpha emissions. For example, if the line is Doppler-shifted to longer wavelengths before it reaches the intergalactic gas (either by a drift velocity of the emitting galaxy or by interaction with gas internal to that galaxy), the intergalactic scattering can be reduced. Nonetheless, the properties of LALA J142442.24+353400.2 are most easily understood if the Universe is already mostly ionized at z = 6.5. A follow-on paper led by coauthor Sangeeta Malhotra strengthens this conclusion by showing that galaxies like LALA J142442.24+353400.2 are neither significantly rarer nor fainter than similar galaxies at lower redshifts.

See the related press release from the National Optical Astronomy Observatory at: http://www.noao.edu/outreach/press/pr04/pr0405.html