So, How Much Does Our Milky Way Galaxy Weigh? 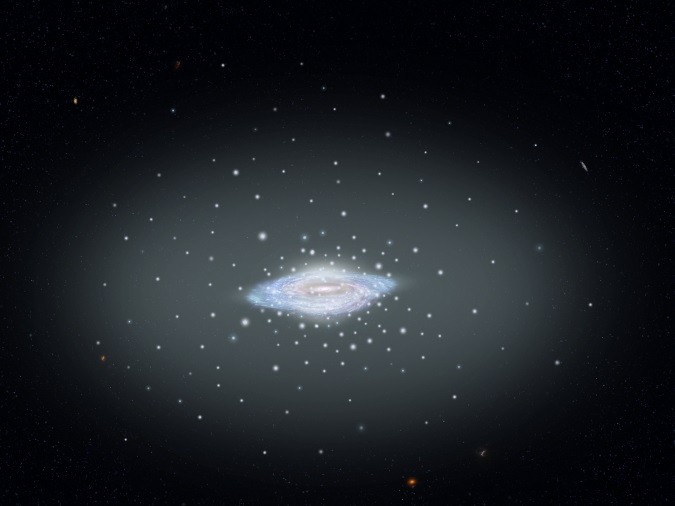 This illustration shows the fundamental architecture of our island city of stars, the Milky Way galaxy -- a spiral disk, central bulge, and diffuse halo of stars and globular star clusters. Not shown is the vast halo of dark matter surrounding our galaxy. A comprehensive survey that combines the observing prowess of both the Hubble Space Telescope and the European Space Agency's Gaia satellite measured the total mass of our galaxy at 1.5 trillion solar masses. Only a few percent of the estimated 200 billion stars in our galaxy contributes to this total. Most of the rest is locked up in invisible dark matter. The precision of Hubble and Gaia each allowed astronomers to measure the movement of the isolated spherical islands called globular star clusters. The more massive a galaxy, the faster its clusters move under the pull of gravity. And, this allows for the mass of our galaxy to be calculated. (Image Credit: NASA, ESA, and A. Field - STScI)

So, How Much Does Our Milky Way Galaxy Weigh?

We live in a gigantic star city. Our Milky Way galaxy contains an estimated 200 billion stars. But that's just the bare tip of the iceberg. The Milky Way is surrounded by vast amounts of an unknown material called dark matter that is invisible because it doesn't release any radiation. Astronomers know it exists because, dynamically, the galaxy would fly apart if dark matter didn't keep a gravitational lid on things.

Still, astronomers would like to have a precise measure of the galaxy's mass to better understand how the myriad galaxies throughout the universe form and evolve. Other galaxies can range in mass from around a billion solar masses to 30 trillion solar masses. How does our Milky Way compare?

We can't put the whole Milky Way on a scale, but astronomers have been able to come up with one of the most accurate measurements yet of our galaxy's mass. Curious astronomers teamed up the Hubble Space Telescope and European Space Agency's Gaia satellite to precisely study the motions of globular star clusters that orbit our galaxy like bees around a hive. The faster the clusters move under the entire galaxy's gravitational pull, the more massive it is. The researchers concluded the galaxy weighs 1.5 trillion solar masses (one solar mass is the mass of our Sun). Most of it locked up in dark matter.

Only a few percent of the 1.5 trillion solar masses is contributed by the approximately 200 billion stars in the Milky Way, which includes a 4-million-solar-mass supermassive black hole at the center. Most of the rest of the mass is locked up in dark matter, an invisible and mysterious substance that acts like scaffolding throughout the universe and keeps the stars in their galaxies.

Earlier research dating back several decades used a variety of observational techniques that provided estimates for our galaxy's mass ranging between 500 billion to 3 trillion solar masses. The improved measurement is near the middle of this range.

"We want to know the mass of the Milky Way more accurately so that we can put it into a cosmological context and compare it to simulations of galaxies in the evolving universe," said Roeland van der Marel of the Space Telescope Science Institute (STScI) in Baltimore, Maryland. "Not knowing the precise mass of the Milky Way presents a problem for a lot of cosmological questions."

The new mass estimate puts our galaxy on the beefier side, compared to other galaxies in the universe. The lightest galaxies are around a billion solar masses, while the heaviest are 30 trillion, or 30,000 times more massive. The Milky Way's mass of 1.5 trillion solar masses is fairly normal for a galaxy of its brightness.

Astronomers used Hubble and Gaia to measure the three-dimensional movement of globular star clusters — isolated spherical islands each containing hundreds of thousands of stars each that orbit the center of our galaxy.

Although we cannot see it, dark matter is the dominant form of matter in the universe, and it can be weighed through its influence on visible objects like the globular clusters. The more massive a galaxy, the faster its globular clusters move under the pull of gravity. Most previous measurements have been along the line of sight to globular clusters, so astronomers know the speed at which a globular cluster is approaching or receding from Earth. However, Hubble and Gaia record the sideways motion of the globular clusters, from which a more reliable speed (and therefore gravitational acceleration) can be calculated.

The Hubble and Gaia observations are complementary. Gaia was exclusively designed to create a precise three-dimensional map of astronomical objects throughout the Milky Way and track their motions. It made exacting all-sky measurements that include many globular clusters. Hubble has a smaller field of view, but it can measure fainter stars and therefore reach more distant clusters. The new study augmented Gaia measurements for 34 globular clusters out to 65,000 light-years, with Hubble measurements of 12 clusters out to 130,000 light-years that were obtained from images taken over a 10-year period.

When the Gaia and Hubble measurements are combined as anchor points, like pins on a map, astronomers can estimate the distribution of the Milky Way's mass out to nearly 1 million light-years from Earth.

"We know from cosmological simulations what the distribution of mass in the galaxies should look like, so we can calculate how accurate this extrapolation is for the Milky Way," said Laura Watkins of the European Southern Observatory in Garching, Germany, lead author of the combined Hubble and Gaia study, to be published in The Astrophysical Journal. These calculations based on the precise measurements of globular cluster motion from Gaia and Hubble enabled the researchers to pin down the mass of the entire Milky Way.

The earliest homesteaders of the Milky Way, globular clusters contain the oldest known stars, dating back to a few hundred million years after the big bang, the event that created the universe. They formed prior to the construction of the Milky Way's spiral disk, where our Sun and solar system reside.

"Because of their great distances, globular star clusters are some of the best tracers astronomers have to measure the mass of the vast envelope of dark matter surrounding our galaxy far beyond the spiral disk of stars," said Tony Sohn of STScI, who led the Hubble measurements.