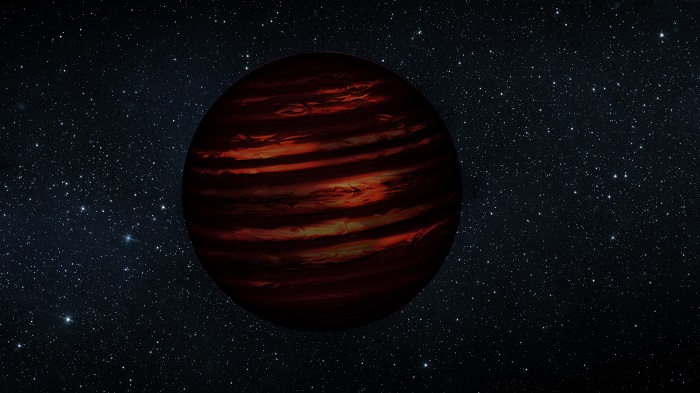 Sometimes a brown dwarf is actually a planet -- or planet-like anyway. A team led by Jonathan Gagne of the Carnegie Institution for Science in Washington DC, that included researchers from the Institute for Research on Exoplanets (iREx) at the University of Montreal, the American Museum of Natural History, and University of California San Diego, discovered that what astronomers had previously thought was one of the closest brown dwarfs to our own Sun is in fact a Planetary Mass Object (PMO).

Smaller than stars, but bigger than giant planets, brown dwarfs are too small to sustain the hydrogen fusion process that fuels stars and allows them to remain hot and bright for a long time. So after formation, brown dwarfs slowly cool down and contract over time. The contraction usually ends after a few hundred million years, although the cooling is continuous.

"This means that the temperatures of brown dwarfs can range from as hot as stars to as cool as planets, depending on how old they are," said Jackie Faherty of the American Museum of Natural History.

Groups of similarly aged stars moving together through space are considered prime regions to search for free-floating planetary like objects, because they provide the only means of age-dating these cold and isolated worlds. Knowing the age, as well as the temperature, of a free-floating object like this is necessary to determine its mass.

Gagne and the research team were able to demonstrate that at about 13 times the mass of Jupiter, SIMP0136 is right at the boundary that separates brown dwarf-like properties, primarily the short-lived burning of deuterium in the object's core, from planet-like properties.

Free-floating Planetary Mass Objects are valuable because they are very similar to gas giant exoplanets that orbit around stars, like our own Solar System's Jupiter or Saturn, but it is comparatively much easier to study their atmospheres. Observing the atmospheres of exoplanets found within distant star systems is challenging because dim light emitted by those orbiting exoplanets is overwhelmed by the brightness of their host stars, which blinds the instruments that astronomers use to characterize an exoplanet's atmosphere.

"The implication that the well-known SIMP0136 is actually more planet-like than we previously thought will help us to better understand the atmospheres of giant planets and how they evolve," Gagne said.

They may be easier to study in great detail, but these free-floating worlds are still extremely hard to discover unless scientists spend a lot of time observing them at the telescope, because they can be located anywhere in the sky and they are very hard to tell apart from brown dwarfs or very small stars. For this reason, researchers have confirmed only a handful of free-floating planetary-like objects so far.

Etienne Artigau, leader of the original SIMP0136 discovery, added "This newest addition to the very select club of free-floating planetary like objects is particularly remarkable because we had already detected fast-evolving weather patterns on the surface of SIMP0136, back when we thought it was a brown dwarf."

In a field where analyzing exoplanet atmospheres is of the utmost interest, having already seen evidence of weather patterns on an easier to observe free-floating object that exists away from the brightness of its host star is an exciting realization.


This work was supported by grants from the National Science and Engineering Research Council of Canada and by a NASA Sagan fellowship.

The Carnegie Institution for Science is a private, nonprofit organization headquartered in Washington DC, with six research departments throughout the US. Since its founding in 1902, the Carnegie Institution has been a pioneering force in basic scientific research. Carnegie scientists are leaders in plant biology, developmental biology, astronomy, materials science, global ecology, and Earth and planetary science.