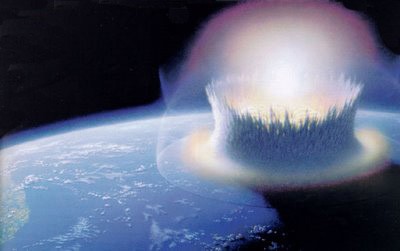 The demise of the dinosaurs is the world's ultimate who-dunit. Was it an asteroid impact? Volcanic eruptions? Climate change? Too many pesky mammals running around eating dino eggs? All of the above? None of the above? Two main camps exist in paleontology today, each having a different view of what killed the dinosaurs and other organisms at the time of the Cretaceous-Tertiary (KT) boundary: A large asteroid impact in the Yucatan Peninsula or volcanic eruptions worldwide, but predominantly in the Deccan Traps of India. Controversy has surrounded the topic for the last four decades and it has become difficult for the general public (and the scientific community at large) to understand the issue due to the tangled assemblage of data which seems to point in many different directions. Luckily, the controversy has not harmed the study of mass extinction causation, but rather has made it a more dynamic and interesting area of study. There has been no settlement to the issue so far, and no clear one is foreseeable. In general, it seems that many paleontologists lean towards the volcanic eruptions side, while many astronomers and physicists favor the asteroid impact side. Geologists are probably evenly split between the two. But recent evidence suggests that the answer may be a combination of the two theories, with the ultimate killer being global climate change triggered by the two events in tandem. It looks like the asteroid that killed off the dinosaurs probably rang the Earth like a bell, triggering super-volcanic eruptions around the globe that may have contributed to the devastation – A one-two punch that ultimately killed-off 75 percent of life on the planet.