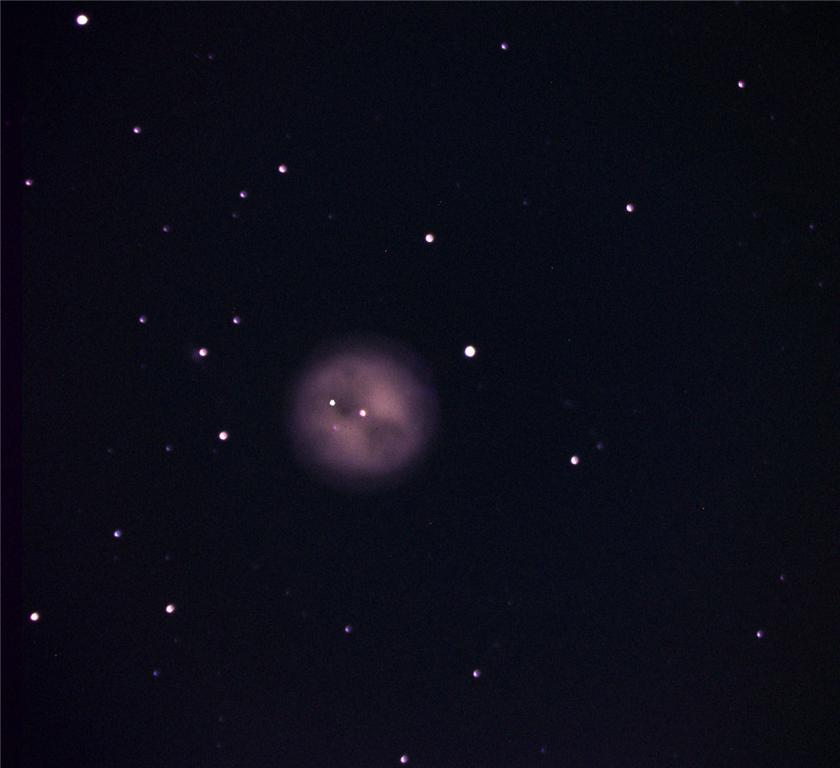 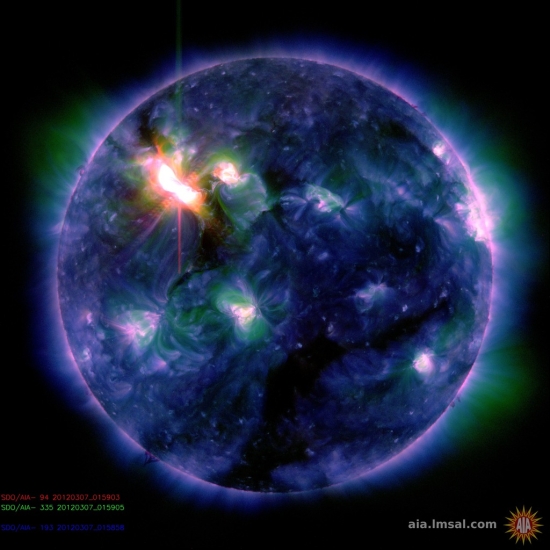 The Sun's surface erupted with a series of solar storms this week, sending a barrage of electrically charged particles crashing into the Earth's magnetic field. So far, the solar blasts have caused only minor disruptions to terrestrial communications systems. But more solar eruptions are on the way over the next few days. The Sun is mid-way through an 11-year solar storm cycle that can have a major impact on activities here on Earth - and in space.

An M6.3-class solar flare — a mid-range eruption -- spewed from the surface of the sun last night, March 9, 2012 at 10:53 p.m. EST, according to an alert from the Space Weather Prediction Center, a joint operation by the National Oceanic and Atmospheric Administration (NOAA) and the National Weather Service.

Space weather scientists use five categories — A, B, C, M and X — to rank solar flares based on their strength and severity. A-class flares are the weakest types of sun storms, while X-class eruptions are the most powerful.

Alex Young, a solar scientist at NASA's Goddard Space Flight Center who studies Sun storm activity, said that airlines are taking alternate routes and some satellites are being put into a safe mode, one of these being the GRAIL satellites.

The twin GRAIL satellites, operated by NASA, are orbiting the moon, collecting data on the lunar surface. Had NASA and the airlines not made these adjustments, magnetic energy from the solar storms, which is most intense at the Earth’s poles, could have seriously disrupted radio communication and caused serious damage to sensitive electronic circuits, especially critical to the NASA mission.

"If the precautions weren't taken, then you'd have the chance of parts of the electronics and parts of the cameras on the spacecraft would be basically destroyed. And something like that, there's no way you could go up and fix it" said Young.

Young said the biggest concern during solar flare events is that they often are accompanied by massive eruptions of matter and energy into space called Coronal Mass Ejections, or CMEs.

If the CMEs are ejected toward the Earth, they arrive like a tsunami of electromagnetically charged sub-atomic particles, traveling more than 965 kilometers per second. Young said when that energy wave strikes Earth's magnetosphere, it disturbs this protective shield.

"And causes it to wiggle, kind of like ringing a bell, and that generates electrical currents in the upper atmosphere. This can excite particles that stream down into the atmosphere in northern latitudes and that creates the aurora borealis."

Solar scientists can predict with great accuracy when CMEs will occur and whether they will impact Earth. What they can't forecast, says Young, is precisely which way the solar winds will be blowing when they interact with the planet's magnetosphere.

Last night's flares have sent solar particles into Earth's atmosphere, which should produce a moderate solar energetic particle event, also called a solar radiation storm. These particles have been detected by NASA's SOHO and STEREO spacecraft, and NOAA's GOES spacecraft. Such storms can interfere with high frequency radio communication.

Geomagnetic storms due to coronal mass ejections (CMEs) earlier in the week have increased in strength, and are now rated a G3 on a scale from G1 to G5.

Joe Kunches, a space scientist with NOAA's Space Weather Center in Boulder, Colorado, indicated that the Sun is in the middle of an 11-year solar storm cycle, and forecasters at NOAA expect more gusts of electrically charged particles visiting Earth within the next week.

Kunches notes a solar wind event occurred at the end of January.

"So, about six weeks ago, we had somewhat similar circumstances. Now it's here again. I think we're going to get used to seeing similar pulses come off the Sun over the next few years, and they may be as often as one every couple of weeks, one a month, something like that," he said.