Some Like It Hot - The Sungrazer That Got Too Close 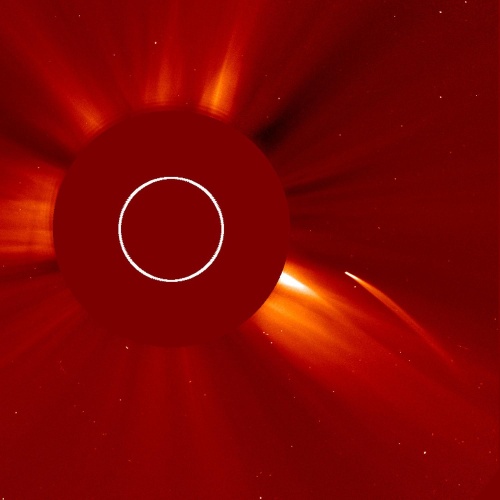 On the evening of Tuesday, July 5, 2011 a comet flew into the sun. Such comets are not unusual, and they're called "sungrazers" since they come so close to the star that they lose a great deal of mass or evaporate and disappear completely. However, no one has actually seen the end of that journey - until now.

For the first time ever, SDO (Solar Dynamics Observatory) captured a 20-minute movie of the comet streaking directly in front of the sun. At its most basic, the movie has scientists excited since it's a "first," but additional analysis of the data may hold more clues about the fate of the comet. Most likely, given the intense heat and radiation, the comet simply evaporated away completely.

This past December 2010, there was a storm of sungrazers.

"The storm began on Dec 13th and ended on the 22nd," says Karl Battams of the Naval Research Lab in Washington, DC. "During that time, the Solar and Heliospheric Observatory (SOHO) detected 25 comets diving into the sun. It was crazy!"

"The comets were 10-meter class objects, about the size of a room or a house," notes Matthew Knight of the Lowell Observatory in Flagstaff, Arizona. "As comets go, these are considered small."

SOHO excels at this kind of work. The spacecraft's coronagraph uses an opaque disk to block the glare of the sun like an artificial eclipse, revealing faint objects that no Earth-bound telescope could possibly see. Every day, amateur astronomers from around the world scrutinize the images in search of new comets. Since SOHO was launched in 1996, more than 2024 comets have been found in this way, an all-time record for any astronomer or space mission.

SOHO is the most successful comet discoverer in history, having found over 2024 comets in over 15 years of operation. What's even more impressive is that the majority of these comets have been found by amateur astronomers and enthusiasts from all over the world, scouring the images for a likely comet candidate from the comfort of their own home. Absolutely anyone can join this project -- all you need is an internet connection and plenty of free time!

Battams and Knight think the comet-storm of Dec. 2010 might herald a much bigger sungrazer to come, something people could see with the naked eye, perhaps even during the day.

"It's just a matter of time," says Battams. "We know there are some big ones out there."

Comet Ikeya-Seki is a good example. In 1965 it appeared out of nowhere, dove toward the sun and swooped over the stellar surface only 450,000 km away. Because Ikeya-Seki's nucleus was large, about 5 km wide, it survived the encounter and emerged as one of the brightest comets of the past thousand years. Japanese observers saw it in broad daylight right beside the morning sun. People watched in amazement as Ikeya-Seki fell into at least three pieces before receding back into the solar system. Similar sungrazing comets were observed in 1843, 1882, 1963 and 1970.

These sungrazers are all related to one another. Astronomers call them the "Kreutz family" after the 19th century astronomer Heinrich Kreutz who first studied them as a group. Modern thinking about the family is attributed to Brian Marsden (1937-2010) of the Harvard Minor Planet Center. He analyzed the orbits of Kreutz comets and saw that they probably came from the breakup of a single giant comet in the 12th century, probably the Great Comet of 1106. According to Marsden's work, Ikeya-Seki-class comets and the smaller SOHO sungrazers are just different-sized fragments of that one progenitor.

Researchers Zdenek Sekanina and Paul Chodas of JPL modeled the fragmentation of the Kreutz progenitor, and in 2007 suggested that more big chunks were on the way. Knight's own counting of SOHO sungrazers supports their idea.

"Since SOHO was launched there has been a trend of increasing numbers of Kreutz sungrazers," he points out. A table in Knight's 2008 PhD thesis shows SOHO detecting 69 sungrazers in 1997 compared to 200 sungrazers in 2010. "The increase is significant and cannot be accounted for by improvements in SOHO or the increasing skill of comet hunters."

Was Comet Ikeya-Seki preceded by a storm like that of Dec. 2010?

"We have not seen a really big Kreutz comet in the era of space-based coronagraphs," notes Knight. "SOHO wasn't around in 1965 to record how many little comets dove into the sun before Ikeya-Seki. It might be 200 comets per year -- or it could be 1000. Without more information, we can't know for sure how soon we might be privileged to see one of the real monsters."