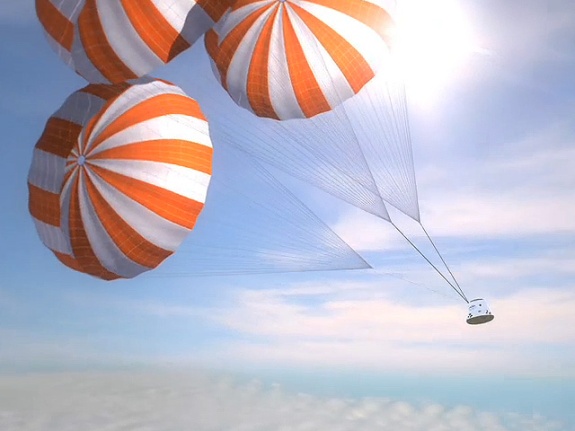 On December 8, 2010, SpaceX became the first commercial company in history to re-enter a spacecraft from low-Earth orbit.

SpaceX launched its Dragon spacecraft into low-Earth orbit atop a Falcon 9 rocket at 10:43 AM EST from Launch Complex 40 at the Air Force Station at Cape Canaveral.

The Dragon spacecraft orbited the Earth at speeds greater than 17,000 miles per hour, reentered the Earth's atmosphere, and landed on target in the Pacific Ocean, 500 miles off of the coast of Southern California, shortly after 2:00 PM EST.

This marks the first time a commercial company has successfully recovered a spacecraft reentering from low-Earth orbit. It is a feat performed by only six nations or government agencies: the United States, Russia, China, Japan, India, and the European Space Agency.

SpaceX is developing a family of launch vehicles and spacecraft that will increase reliability and performance of space transportation, while ultimately reducing costs by a factor of ten. With the Falcon 1 and Falcon 9 rockets, SpaceX has a diverse manifest of launches to deliver commercial satellites to orbit.

This was the first flight under NASA's COTS program to develop commercial supply services to the International Space Station. After the Space Shuttle retires, SpaceX will fly at least 12 missions to carry cargo to and from the International Space Station as part of the Commercial Resupply Services contract for NASA. The Falcon 9 rocket and Dragon spacecraft were designed to one day carry astronauts; both the COTS and CRS missions will yield valuable flight experience toward this goal.

Before the successful launch, reporters were buzzing with news of a "secret" payload, stowed on board. So what was inside the mystery package? Their tribute to Monty Python -- A wheel of cheese.

The Dragon spacecraft is comprised of 3 main elements: the Nosecone, which protects the vessel and the docking adaptor during ascent; the Spacecraft, which houses the crew and/or pressurized cargo as well as the service section containing avionics, the RCS system, parachutes, and other support infrastructure; and the Trunk, which provides for the stowage of unpressurized cargo and will support Dragon’s solar arrays and thermal radiators.

Though designed to address cargo and crew requirements for the ISS, as a free-flying spacecraft Dragon also provides an excellent platform for in-space technology demonstrations and scientific instrument testing. SpaceX is currently manifesting fully commercial, non-ISS Dragon flights under the name "DragonLab." DragonLab represents an emergent capability for in-space experimentation.

To ensure a rapid transition from cargo to crew capability, the cargo and crew configurations of Dragon are almost identical, with the exception of the crew escape system, the life support system and onboard controls that allow the crew to take over control from the flight computer when needed. This focus on commonality minimizes the design effort and simplifies the human rating process, allowing systems critical to Dragon crew safety and ISS safety to be fully tested on uncrewed demonstration flights.

For cargo launches the inside of the spacecraft is outfitted with a modular cargo rack system designed to accommodate pressurized cargo in standard sizes and form factors. For crewed launches, the interior is outfitted with crew couches, controls with manual override capability and upgraded life-support.