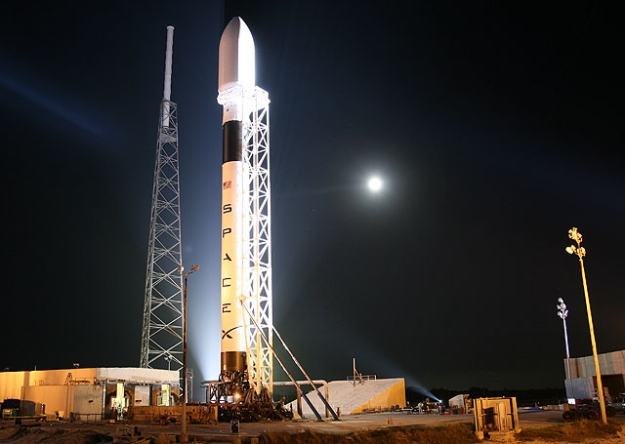 A SpaceX Falcon 9 rocket thundered into space and delivered a Dragon cargo capsule into orbit on May 22, 2012. The launch began an ambitious mission to show that the company is ready to deliver cargo to the International Space Station.

"We're now back on the brink of a new future, a future that embraces the innovation the private sector brings to the table," said NASA Administrator Charles Bolden. "The significance of this day cannot be overstated. While there is a lot of work ahead to successfully complete this mission, we are off to a good start."

Working with an instantaneous launch window, SpaceX, short for Space Exploration Technologies of Hawthorne, CA, proceeded through a flawless countdown. Liftoff from Space Launch Complex-40 at Cape Canaveral Air Force Station in Florida came at 3:44 a.m. EDT, just as the station was crossing 249 miles above the North Atlantic.

"Every bit of adrenaline in my body released at that moment," said Elon Musk about the moment the rocket lifted off the pad. Musk is the founder, CEO and chief designer of SpaceX. "People were really giving it their all. For us, it was like winning the Super Bowl."

The launch came three days after the rocket aborted a previous launch attempt. William Gerstenmaier, NASA's associate administrator for Human Exploration and Operations Mission Directorate, lauded the company for getting the craft ready for the successful launch.

"They stayed focused and kept moving forward," Gerstenmaier said. "Things are moving in the right direction."

Dragon is carrying about 1,200 pounds of supplies for the crew of the station and experiments designed by students. The spacecraft can hold 7,300 pounds of material for delivery to the station, but since this is a test flight, the manifest was limited to important but not critical materials. Food and clothing make up the bulk of the supplies.

The launch put the Dragon on a course to rendezvous with the space station in three days. A detailed series of navigation and other systems tests will be performed in space before the capsule is allowed to move close enough to the station for astronauts to grab it with the robot arm and connect it to the Earth-facing port of the Harmony module.

The tests include a careful approach to the station that calls for the spacecraft to pause several times. The space station crew also will show that they can communicate directly with the uncrewed Dragon capsule. If all the testing goes well, they will go ahead with the rendezvous and berthing.

"There's still a thousand things that have to go right, but we are looking forward to this exciting mission," said Alan Lindemoyer, manager of NASA's Commercial Crew and Cargo Program.

The Dragon will remain connected to the station for about three weeks, allowing astronauts to empty it before loading used scientific equipment inside for the return to Earth. Reversing the process of connecting the spacecraft to the station, astronauts will use the robotic arm to remove the Dragon capsule. The Dragon will then de-orbit and return to Earth under parachutes, splashing down in the Pacific Ocean off the California coast.

The SpaceX Falcon 9 and Dragon capsule lift off May 22, 2012, from Cape Canaveral Air Force station in Florida to begin a demonstration mission to the International Space Station.

The SpaceX Dragon capsule closes in on the International Space Station for a series of tests to clear it for its final rendezvous and grapple.

SpaceX COTS-2 Mission Animation - A Commercial-Off-The-Shelf (COTS) launch would not be complete without a commercial. So now here is a word from your local sponsor.

Animation of the launch, flight and landing of a SpaceX Dragon capsule on a demonstration mission to the International Space Station as part of NASA's COTS program.