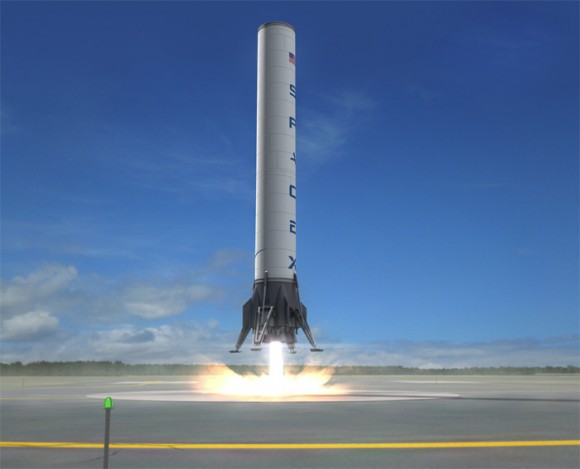 On Thursday, March 7, 2013, SpaceX's Grasshopper doubled its highest leap to date to rise 24 stories or 80.1 meters (262.8 feet), hovering for approximately 34 seconds and landing safely using closed loop thrust vector and throttle control. Grasshopper touched down with its most accurate precision thus far on the center-most part of the launch pad. At touchdown, the thrust to weight ratio of the vehicle was greater than one, proving a key landing algorithm for Falcon 9. The test was completed at SpaceX's rocket development facility in McGregor, Texas.

Grasshopper, SpaceX's vertical takeoff and landing (VTVL) vehicle, continues SpaceX's work toward one of its key goals -- developing fully and rapidly reusable rockets, a feat that will transform space exploration by radically reducing its cost. With Grasshopper, SpaceX engineers are testing the technology that would enable a launched rocket to land intact, rather than burn up upon reentry to the Earth's atmosphere.

Elon Musk, CEO and Chief Designer of SpaceX, discussing the main goal of the reusable Grasshopper rocket: a 100-fold reduction in launch costs.


SpaceX designs, manufactures, and launches the world's most advanced rockets and spacecraft. The company was founded in 2002 by Elon Musk to revolutionize space transportation, with the ultimate goal of enabling people to live on other planets. Today, SpaceX is advancing the boundaries of space technology through its Falcon launch vehicles and Dragon spacecraft.

SpaceX has gained worldwide attention for a series of historic milestones. It is the only private company ever to return a spacecraft from low-Earth orbit, which it first accomplished in December 2010. The company made history again in May 2012 when its Dragon spacecraft attached to the International Space Station, exchanged cargo payloads, and returned safely to Earth -- a technically challenging feat previously accomplished only by governments. In October 2012, Dragon again successfully delivered cargo to and from the space station in the first official cargo resupply mission for NASA.