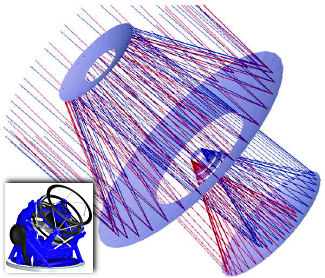 UPDATED: An LSST representive has alerted me that the illustration here is outdated - the current optical design actually locates the tertiatry in virtually the same plane as the primary, and the camera is sky-ward from the primary. - Editor, bringing you the news as fast a reality can manufacture it :-).

The LSST Corporation has awarded a $2.3 million contract to the University of Arizona Steward Observatory Mirror Lab to purchase the glass and begin engineering work for the 8.4-meter diameter main mirror for the Large Synoptic Survey Telescope (LSST). This award was announced today in San Diego at the 205th meeting of the American Astronomical Society.

Acquiring the LSST primary mirror was made possible by a generous, private donation from Arizona businessman Richard Caris. The UA award covers the first of four phases in an estimated $13.8 million effort to design, cast, polish and integrate the mirror into the LSST mirror support cell. Coupled with substantial support provided by Research Corporation under the leadership of John Schaefer, these private funds boost the LSST off the drawing board and into production.

The LSST is a proposed world-class, ground-based telescope that can survey the entire visible sky every three nights. It will generate an awesome 30 terabytes of data per night from a three billion-pixel digital camera, producing a vast database of information on the universe. LSST will take exposures every 10 seconds, opening a movie-like window on objects that change or move on rapid timescales -- exploding supernovae, Earth-approaching asteroids, and distant Kuiper belt objects. Via the light-bending gravity of dark matter, LSST will chart the history of the expansion of the universe, yielding a unique probe of the nature of the mysterious dark energy that fills our universe.

"LSST's rapid, deep coverage of the universe is a qualitative leap in capability that is enabled by progress in microelectronics, software, and large optics fabrication," said University of California, Davis, Professor and LSST Director J. Anthony Tyson. "LSST will change the way we observe the universe by mapping the visible sky deeply, rapidly, and continuously. It will open entirely new windows on our universe, yielding discoveries in a variety of areas of astronomy and fundamental physics." "The LSST will catalog objects, characterize them automatically and alert astronomers to interesting results," said Steward Observatory astronomer and LSST board member Philip A. Pinto. "And, unlike data from any other big telescope, LSST data will be public, all the time, available right away for everyone."

Richard Caris, founder and Chairman of the Board of Interface, Inc., in Scottsdale, AZ, donated the funds for the LSST primary mirror. Caris became involved with astronomy in Arizona when his company provided load cells for the Large Binocular Telescope. Intrigued with the UA Steward Observatory astronomy department and mirror lab, Caris first became interested in the proposed LSST and its search for Near Earth Objects. He later was drawn to its mission to probe Dark Matter and Dark Energy. The data being available to anyone, not just professional astronomers, further motivated him to donate the funds to purchase the LSST mirror and jump start the project. "This is an example of how private money can have a major impact on getting these kinds of projects off the ground and going," Pinto said. "There's the value of the mirror itself. But there's an enormous value in getting started at the moment. We'll save three or four years on the construction schedule. We'll be in good shape to get the mirror on time for first light in 2012."

Steward Observatory's Mirror Lab team will create the mirror by melting borosilicate glass in a mold of hollow, hexagonal core boxes that give the mirror its strong, lightweight "honeycomb" structure. The mold spins inside a giant rotating furnace during casting, reaching peak temperatures at 1,180 degrees Celsius (2,156 degrees Fahrenheit) and a spin rate of seven revolutions per minute. The Mirror Lab has produced four 6.5-meter mirrors and two 8.4-meter mirrors by this technique in the last decade.

The prime engineering challenge of the LSST mirror will be leaving a large hole in the middle of the mirror, according to LSST Project Manager Donald W. Sweeney. The hole will accommodate the telescope's 5-meter tertiary (third) mirror. Along with a convex, or outwardly curved, 3.4-meter secondary mirror, the total LSST optical system will be "the fastest, most compact system of this scale ever built for an advanced research telescope," Sweeney said.

"The challenge compared to previous 8.4-meter telescopes is to engineer the LSST so its three mirrors will be held in perfect alignment," Mirror Lab Director and Regents' Professor of astronomy Roger Angel said.

The LSST was one of the two highest priorities for future ground-based telescope facilities in the most recent Decadal Survey of astronomy conducted by the National Academy of Sciences. LSST will open a new frontier in addressing time variable phenomena in astronomy, according to the May 2000 academy report "Astronomy and Astrophysics in the New Millennium."

The immediate goal of the LSST Corporation is to prepare a detailed design for consideration by funding organizations and foundations, toward telescope first light as early as 2012. Four sites in Chile, Mexico, and the Canary Islands are currently being evaluated to host the telescope, to be reduced to two finalists for the site in 2005.

A foundation for the advancement of science, Research Corporation was established in 1912 by scientist, inventor, and philanthropist Frederick Gardner Cottrell. It provides an average of $6 million per year in support of faculty in chemistry, physics, and astronomy at colleges and universities in the U.S. and Canada. Research Corporation.s long-standing support of astronomy includes partnerships in the Large Binocular Telescope (LBT) and in operating the 12-meter radio telescope at Kitt Peak.

The University of Arizona (UA) is a state institution of higher education in Tucson, AZ. UA research units include the Steward Observatory, which operates observatory facilities on Kitt Peak, Mt. Lemmon, Mt. Hopkins, and Mt. Graham for the benefit of faculty and students at the Arizona state universities. The Steward Observatory Mirror Lab has made mirrors for the MMT, Magellan, and Large Binocular Telescope, and Steward Observatory is a partner in these projects.

Located in the city of Davis near California's state capital, UC Davis is a large and diverse campus with a strong tradition of interdisciplinary and multidisciplinary research. The campus is well known for its strengths in biological, environmental and agricultural sciences as well as major programs in transportation, nanoscience, cosmology, and computational science and engineering. UC Davis receives over $420 million in research funds per year and ranks 14th in the nation in research and development expenditures according to the National Science Foundation.

More information and recent LSST graphics are online at http://www.lsst.org.