Supermassive Black Hole Spins at Nearly the Speed of Light 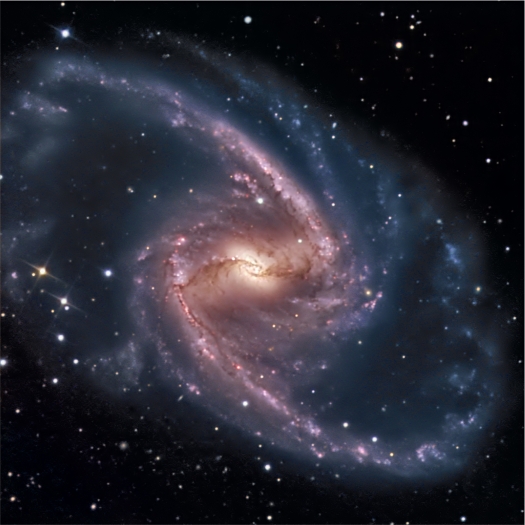 Imagine a sphere more than 2 million miles across - eight times the distance from Earth to the Moon - spinning so fast that its surface is traveling at nearly the speed of light. Such an object exists: the Supermassive Black Hole at the center of the spiral galaxy NGC 1365.

"This is the first time anyone has accurately measured the spin of a Supermassive Black Hole," said lead author Guido Risaliti of the Harvard-Smithsonian Center for Astrophysics (CfA) and INAF - Arcetri Observatory.

A black hole's gravity is so strong that, as the black hole spins, it drags the surrounding space along. The edge of this spinning hole is called the event horizon. Any material crossing the event horizon is pulled into the black hole. In-spiraling matter collects into an accretion disk, where friction heats it and causes it to emit X-rays.

Risaliti and his colleagues measured X-rays from the center of NGC 1365 to determine where the inner edge of the accretion disk was located. This Innermost Stable Circular Orbit - the disk's point of no return - depends on the black hole's spin. Since a spinning black hole distorts space, the disk material can get closer to the black hole before being sucked in.

Astronomers want to know the black hole's spin for several reasons. The first is physical - only two numbers define a black hole: mass and spin. By learning those two numbers, you learn everything there is to know about the black hole.

Most importantly, the black hole's spin gives clues to its past and by extension the evolution of its host galaxy.

"The black hole's spin is a memory, a record, of the past history of the galaxy as a whole," explained Risaliti.

Although the black hole in NGC 1365 is currently as massive as several million Suns, it wasn't born that big. It grew over billions of years by accreting stars and gas, and by merging with other black holes.

Similarly, if the black hole grew randomly by pulling in matter from all directions, its spin would be low. Since its spin is so close to the maximum possible, the black hole in NGC 1365 must have grown through "ordered accretion" rather than multiple random events.

Studying a Supermassive Black Hole also allows theorists to test Einstein's general theory of relativity in extreme conditions. Relativity describes how gravity affects the structure of space-time, and nowhere is space-time more distorted than in the immediate vicinity of a black hole.

The team also has additional observations of NGC 1365 that they will study to determine how conditions other than black hole spin change over time. Those data are currently being analyzed. At the same time, other teams are observing several other Supermassive Black Holes with NuSTAR and XMM-Newton.