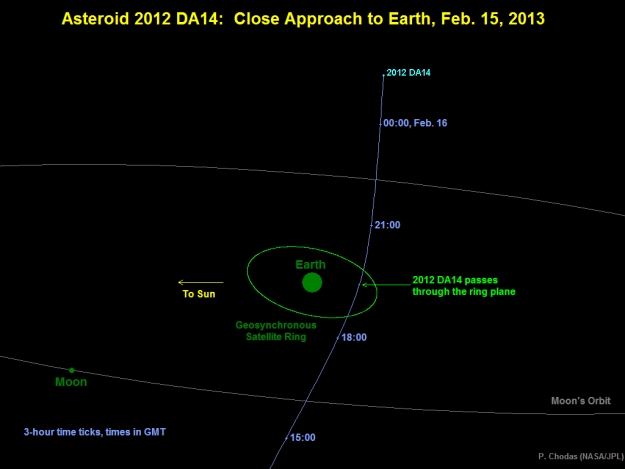 The small near-Earth asteroid 2012 DA14 will pass very close to the Earth on February 15, 2013, so close that it will pass inside the ring of geosynchronous weather and communications satellites. NASA's NEO Program Office can accurately predict the asteroid's path with the observations obtained, and it is therefore known that there is no chance that the asteroid might be on a collision course with the Earth. Nevertheless, the flyby will provide a unique opportunity for researchers to study a near-Earth object up close.

Asteroid 2012 DA14 will be closest to Earth on February 15, 2013 at about 19:24 GMT (2:24 p.m. EST or 11:24 a.m. PST), when it will be at a distance of about 27,700 kilometers (17,200 miles) above the Earth's surface. This is so close that the asteroid will actually pass inside the ring of geosynchronous satellites, which is located about 35,800 kilometers (22,200 miles) above the equator, but still well above the vast majority of satellites, including the International Space Station. At its closest, the asteroid will be only about 1/13th of the distance to the Moon. The asteroid will fly by our planet quite rapidly, at a speed of about 7.8 kilometers/second (17,400 miles/hour) in a south-to-north direction with respect to the Earth.

Even though 2012 DA14 is coming remarkably close, it will still only appear as a point of light in the biggest of optical telescopes because of its small size. Based on its brightness, astronomers estimate that it is only about 45 meters (150 feet) across. It will brighten only to magnitude 7.5, too faint to be seen with the naked eye but easily visible in a good set of binoculars or a small telescope. The best viewing location for the closest approach will be Indonesia, from which the asteroid will be seen to move at a rate of almost 1 degree per minute against the star background. Eastern Europe, Asia and Australia are also well situated to see the asteroid around its closest approach. But by the time the Earth rotates enough for observers in the continental United States to have a chance to see the asteroid, it will have receded and faded to about 11th magnitude. Radar astronomers plan to take images of the asteroid about 8 hours after closest approach using the Goldstone antenna.

2012 DA14 has not been in our catalogs for very long -- it was discovered in February 2012 by astronomers at the La Sagra Sky Survey program in southern Spain and reported to the Minor Planet Center. The asteroid had just made a fairly distant passage by the Earth, about 7 times farther than the distance to the Moon when it was first detected by the Spanish group. Since 2012 DA14's orbital period around the Sun has been about 368 days, which is very similar to the Earth's, the asteroid made a series of annual close approaches, this year's being the closest. But this encounter will shorten 2012 DA14's orbital period to about 317 days, changing its orbital class from Apollo to Aten, and its future close approaches will follow a different pattern. The close approach this year is the closest the asteroid will come for at least 3 decades.

"This is a record-setting close approach," says Don Yeomans of NASA's Near Earth Object Program at JPL. "Since regular sky surveys began in the 1990s, we've never seen an object this big get so close to Earth."

Earth's neighborhood is littered with asteroids of all shapes and sizes, ranging from fragments smaller than beach balls to mountainous rocks many kilometers wide. Many of these objects hail from the asteroid belt, while others may be corpses of long-dead, burnt out comets. NASA's Near-Earth Object Program helps find and keep track of them, especially the ones that come close to our planet.

2012 DA14 is a fairly typical near-Earth asteroid. It measures some 50 meters wide, neither very large nor very small, and is probably made of stone, as opposed to metal or ice.

The impact of a 50-meter asteroid is not cataclysmic -- unless you happen to be underneath it. Yeomans points out that a similar-sized object formed the mile wide Meteor Crater in Arizona when it struck about 50,000 years ago. "That asteroid was made of iron," he says, "which made it an especially potent impactor." Also, in 1908, something about the size of 2012 DA14 exploded in the atmosphere above Siberia, leveling hundreds of square miles of forest. Researchers are still studying the "Tunguska Event" for clues to the impacting object.

"2012 DA14 will definitely not hit Earth," emphasizes Yeomans. "The orbit of the asteroid is known well enough to rule out an impact."

Even so, it will come interestingly close. NASA radars will be monitoring the space rock as it approaches Earth closer than many man-made satellites. Yeomans says the asteroid will thread the gap between low-Earth orbit, where the ISS and many Earth observation satellites are located, and the higher belt of geosynchronous satellites, which provide weather data and telecommunications.

"The odds of an impact with a satellite are extremely remote," he says. Almost nothing orbits where DA14 will pass the Earth.

NASA's Goldstone radar in the Mojave Desert is scheduled to ping 2012 DA14 almost every day from Feb. 16th through 20th. The echoes will not only pinpoint the orbit of the asteroid, allowing researchers to better predict future encounters, but also reveal physical characteristics such as size, spin, and reflectivity. A key outcome of the observing campaign will be a 3D radar map showing the space rock from all sides.

During the hours around closest approach, the asteroid will brighten until it resembles a star of 8th magnitude. Theoretically, that’s an easy target for backyard telescopes. The problem, points out Yeomans, is speed. “The asteroid will be racing across the sky, moving almost a full degree (or twice the width of a full Moon) every minute. That’s going to be hard to track.” Only the most experienced amateur astronomers are likely to succeed.

Those who do might experience a tiny chill when they look at their images. That really was a close shave.