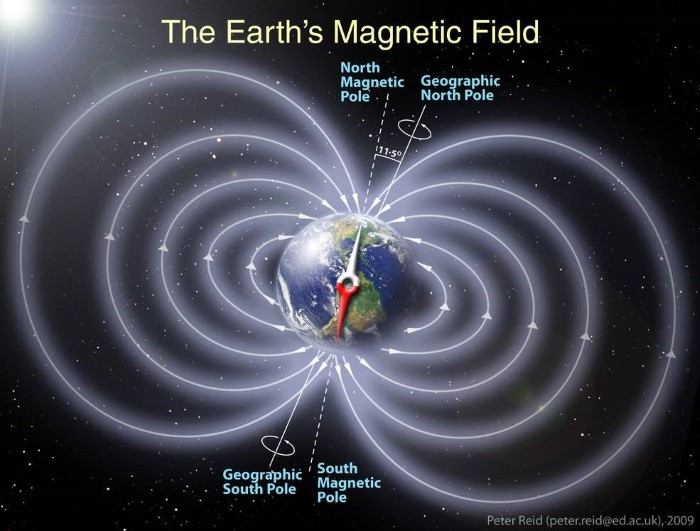 After some 400 years of relative stability, Earth's North Magnetic Pole has moved nearly 1100 kilometers out into the Arctic Ocean during the last century and at its present rate could move from northern Canada to Siberia within the next half century. Scientists have determined that Earth's magnetic field has flipped its polarity many times over the millennia -- Reversals are the rule, not the exception. Earth has settled into a pattern of a pole reversal about every 200,000 to 300,000 years, although it has been more than twice that long since the last reversal. The last time that Earth's poles flipped in a major reversal was about 780,000 years ago. Does the unexpectedly fast rate of movement in the North Magnetic Pole signal the beginnings of an impending reversal?

I have to wonder if this movement of the magnetic field might be accompanied by a rising of heat from Earth's mantel, which to me would be a more likely link to polar ice melt than increased CO2 on the atmosphere.

Thanks for your comment -- You have made a very good point.

NOAA's direct quote is: "This performance degradation is caused by fast-changing core flows in the North Polar region of the Earth’s outer core.”

NOAA is specifically attributing the shifting North Magnetic Pole to the "fast-changing core flows... of the Earth’s outer core." This statement is being presented by NOAA as a fact, not an opinion or conjecture.

If that is so, then the next logical question is: What other consequences could be resulting from the fast-changing core flows? For example, if the thickness of the Earth's crust under the polar regions is becoming slightly thinner due to the changing flows, could this cause a slight temperature increase on the surface of the polar regions?

You have made a very insightful observation.


Better to ask actual geophysicist or to do some further research on this claim than to give it credit by just letting it stand as-is. Extraordinary claims require extraordinary evidence to prove. The correlation between core fluid movement and atmospheric temperature has already been researched. https://www.nasa.gov/topics/earth/features/earth20110309.html

This study does not address the question asked at all. Rather, it looks at how movements of the Earth's core effect the length of days during Summer and Winter periods, and whether or not THOSE changes have an appreciable effect on whether. The conclusion drawn in the last paragraph is not justified by the study, IMHO. Anyone who has visited a mine knows that it gets very hot, very quickly as one descends into the Earth. By the the time you are only 2-3,000 feet below the Earth's surface, miners are working shirtless. It would not take much of this heat to get closer to the Earth's surface to impact polar ice melt. Given that the specific heat of the ground is much higher than the specific heat of air, a small change in ground temperature would have a much greater impact on ice than a large change in air temperature. First day of Meteorology 101 teaches that the air heats the ground, not the other way around.

Furthermore, when one looks at a geologic time scale, Earth's CO2 levels are currently at the LOW end of historical norms. At the beginning of the last ice age, for example, CO2 levels were at least twice as high as they are today. Seemingly unknown to most journalists, CO2 is a naturally occurring gas on our planet which is the one gas essential to life on our planet. Currently CO2 comprises about .04% of the Earths atmosphere. If it went to 0, life on Earth would be over. In fact, by the time you get down to .035%, some plant life begins to suffer. Those who think that humans can and should control CO2 levels have yet to tell us what level they think we should target, and why.

"First day of Meteorology 101 teaches that the air heats the ground, not the other way around."

I misspoke here. I should have proof read myself better. First day of Meteorology 101 is that the Ground heats the Air.
The different rates of heating and cooling across the Earth's surface is what drives our weather.