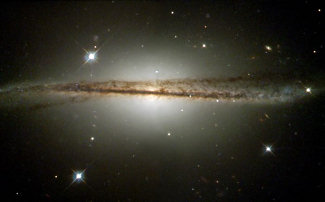 UMass and Berkeley astrophysicists belive that two of the Milky Way's satellite galaxies - the Large and Small Magellanic Clouds - are interacting with dark matter in the Milky Way to create a mysterious warp in our galactic disk. The warp, which extends across the entire 200,000-light year diameter of the galaxy, has been described by the researchers in terms of a rather simple mathematical model.

Well shoot, we're going to have to get that fixed.