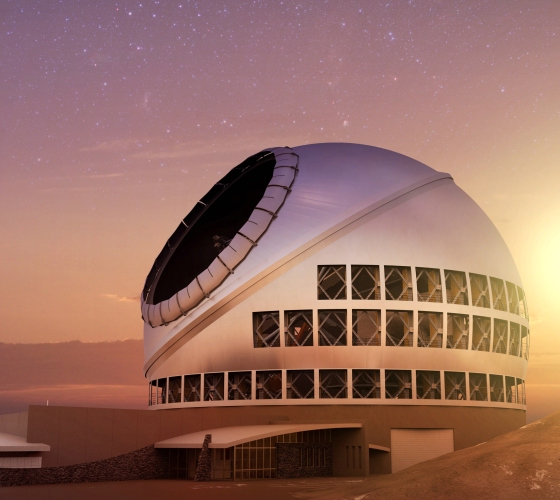 With the signing last week of a "master agreement" for the Thirty Meter Telescope — destined to be the most advanced and powerful optical telescope in the world — the University of California and UCLA moved a step closer to peering deeper into the cosmos than ever before.

The agreement, signed by UC President Mark Yudof and several international partners, formally outlines the telescope project's goals, defines the terms of its construction and establishes its governance structure, design and financing.

Work on the Thirty Meter Telescope (TMT), named for its 30-meter primary mirror — three times the diameter of the largest existing telescopes — is scheduled to begin in April 2014 atop Hawaii's dormant Mauna Kea volcano. The TMT's scientific operations are slated to start in 2022.

UCLA researchers will play a significant role in the development and use of the TMT, which will enable astronomers to study stars and other objects throughout our solar system, the Milky Way and neighboring galaxies, and galaxies forming at the very edge of the observable universe, near the beginning of time.

The project is a collaboration among universities in the United States and institutions in Canada, China, India and Japan, with major funding provided by the Gordon and Betty Moore Foundation.

"UCLA is taking a lead role in defining the science for this monumental, international project," said Andrea Ghez, a professor of physics and astronomy who holds UCLA's Lauren B. Leichtman and Arthur E. Levine Chair in Astrophysics.

Ghez, who has served on the TMT science advisory committee since its first meeting 13 years ago, described the master agreement as an important milestone for the UC system, UCLA and the field of astronomy.

"One reason why we want to build TMT is to delve into the most fundamental workings of our universe," she said. "It is truly amazing to think about what TMT will teach us about the universe."

Creating cutting-edge instruments for the TMT

UCLA professor of astronomy James Larkin is one of those excited about the TMT's potential. He is the principal investigator for the Infrared Imaging Spectrograph (IRIS), one of three scientific instruments that will be ready for use with the TMT when the telescope begins operation.

"IRIS is an imaging spectrograph that perhaps can best be described as a sophisticated camera that takes small images at 2,000 different wavelengths simultaneously," Larkin said. "Or it can be thought of as a spectrograph that takes 10,000 adjacent spectra over a rectangular area of the sky."

The instrument will be able to produce images three times sharper than what is currently achievable with the two powerful W.M. Keck telescopes on Mauna Kea and many times sharper than the Hubble Space Telescope, Larkin said. IRIS will image planets that are forming but are often too dim and red to be detected by smaller telescopes, and it will be the only one of the three TMT instruments to magnify images to the theoretical diffraction limit.

"Exploring the universe at this unprecedented resolution and sensitivity means we will be surprised by what we find," he said. "IRIS has a wide range of science objectives, ranging from chemical analysis of the surfaces of solar system moons like Titan and Europa, to following the evolution of galaxies over the past 13 billion years, to searching for the first stars in the very early universe."

With the most sensitive spectroscopy available anywhere in the near-infrared, IRIS will yield the first real understanding the physical nature of these early galaxies, a key goal of research in cosmology and astrophysics.

IRIS is a joint project involving more than 50 astronomers from the U.S., Canada, Japan and China, and many of the instrument's most crucial components will be designed and built at UCLA's Infrared Laboratory for Astrophysics, founded more than 20 years ago by Ian S. McLean, who is the lab's director and a UCLA professor of physics and astronomy.

The TMT, McLean said, will enable astronomers to see not only much fainter objects but also to resolve them in much greater detail.

"Both of these attributes are crucial for almost all of the frontier areas of modern astrophysics, from studies of nearby exoplanetary systems to probing the most distant objects in the universe," he said. "The TMT is precisely the right kind of scientific tool to complement national facilities under development, such as the James Webb Space Telescope. We are all very excited that the TMT master agreement is signed."

In 1989, at the beginning of the era of the twin W.M. Keck telescopes — currently the world's largest optical and infrared telescopes — UCLA set up its infrared astrophysics lab to develop state-of-the-science instruments for them. All four of the currently operational infrared cameras and spectrometers on the Keck telescopes were built entirely or in part at UCLA. McLean expects UCLA's infrared lab to play a similar role with the TMT.

The concept of a telescope three times larger and with nine times more light-gathering power than the Keck telescopes was first envisaged nearly 15 years ago, and UCLA has played a major role in defining the type of instruments needed for such a telescope. IRIS, under Larkin's leadership, is one example, McLean said. Another proposed TMT instrument, the Infrared Multi-Slit Spectrometer (IRMS), will be a near-replica of the successful MOSFIRE instrument that McLean delivered to the W.M. Keck Observatory in 2012.

With the sharpest and most sensitive images ever taken in the near infrared, the TMT and IRIS will reveal the universe in new ways, exploring everything from dwarf planets at the orbit of Pluto to the most distant galaxies ever explored near the dawn of time, McLean said.

The twin 10-meter Keck telescopes have "attracted many distinguished faculty, trained students at all levels and served the people of California and the world with inspiring discoveries and technological leadership," said McLean. "The University of California will continue that tradition of leadership and excellence with its participation in the TMT project, and UCLA will play a key role through the development and exploitation of infrared spectroscopy and high-resolution imaging technology."

Solving the mysteries of black holes with the TMT

UCLA's Ghez, who leads the development of the Galactic Center project, said her research will be greatly enhanced by the Thirty Meter Telescope.

Ghez and her colleagues discovered a supermassive black hole at the center of the Milky Way that has a mass approximately 4 million times that of our sun. Such mysterious and intriguing black holes, which were predicted by Einstein's theory of general relativity, provide remarkable laboratories for the study of physics in extreme environments.

The TMT, Ghez said, will identify and map the orbits of fainter stars close to our black hole, extending our knowledge of physics with a fundamental test of Einstein's theory. Because stars in the vicinity of the black hole will be affected by the presence or absence of dark matter, their orbits will significantly constrain our current model of dark matter, which is central to our understanding of galaxy formation.

TMT will also extend our ability to measure accurate masses of black holes in more distant galaxies and in low-mass galaxies, likely revealing when and how black holes are "fed," Ghez said.

By revealing details about resolved stellar populations in nearby galaxies, the TMT and IRIS will directly probe the formation of nearby stellar systems like our own Milky Way. Because it will be possible to measure the mass distributions of stars in a variety of new environments and in galaxies outside of the Milky Way, IRIS will help scientists learn whether stars form differently under different conditions.

In the distant universe, IRIS's ability to image and study the internal workings of early galaxies will represent a major breakthrough in the study of galaxy formation during the known peak period of star formation.

The Thirty Meter Telescope is a collaboration of the University of California, the California Institute of Technology, the Association of Canadian Universities for Research in Astronomy, the National Astronomical Observatory of Japan, a consortium of Chinese institutions led by the National Astronomical Observatories of the Chinese Academy of Sciences, and institutions in India supported by India's Department of Science and Technology.

In addition to President Yudof, signatories of the TMT master agreement are Donald E. Brooks, chair of the institutional council of Association of Canadian Universities for Research in Astronomy; Jean-Lou Chameau, president of the California Institute of Technology; Masahiko Hayashi, director general of the National Astronomical Observatory of Japan; P. Sreekumar, director of the Indian Institute of Astrophysics; and Jun Yan, director general of the National Astronomical Observatories of China.

UCLA is California's largest university, with an enrollment of more than 40,000 undergraduate and graduate students. The UCLA College of Letters and Science and the university's 11 professional schools feature renowned faculty and offer 337 degree programs and majors. UCLA is a national and international leader in the breadth and quality of its academic, research, health care, cultural, continuing education and athletic programs. Six alumni and six faculty have been awarded the Nobel Prize.