Thirty Years into its Journey - Voyager 2 Crosses the Termination Shock 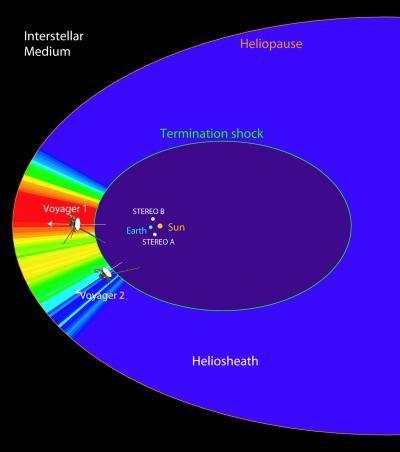 Voyager 2, the only spacecraft ever to have visited Uranus and Neptune, has reached a new landmark when it crossed and then left behind the termination shock at the edge of the solar system. This makes Voyager 2 only the second spacecraft known to have passed through this turbulent region, following its twin, Voyager 1. More than 30 years after its launch Voyager 2 is still a source of invaluable scientific data.

Back in 2006, when budget cuts threatened the program, The Planetary Society and its members fought successfully to save the Voyagers and maintain communications with these remarkable spacecraft. Were it not for the Society's stand, it may well be that this latest chapter in the Voyager saga would never have been written.

Significantly, Voyager 2 reached this landmark at a point substantially closer to the Sun than Voyager 1 had been when it crossed the termination shock. Back in 2004, the Sun had been near its solar maximum, a peak of activity characterized by strong solar winds that increased the pressure in the heliosphere and pushed the termination shock outwards. In fact, scientists believe that for a full two years, as Voyager 1 was streaking away from the Sun, the termination shock was also moving ahead of it, staying just out of reach of the spacecraft. Finally the solar activity waned, causing the heliosphere to slow down its expansion and eventually to contract back towards the Sun. This allowed Voyager 1 to catch up with the termination shock, and finally pass through it at a distance of 94.1 Astronomical Units (AU) from the Sun, each AU representing the average distance of the Earth and Sun.

Voyager 2, in contrast, was approaching the outer heliosphere at a time of declining solar activity, and scientists therefore expected that it would cross the termination shock much closer to the Sun than its twin. And so it proved to be. The first sign of the approaching crossing came on August 1, 2007 in the form of electron plasma oscillations detected by the Voyager 2's instruments when the spacecraft was 83.4 AU from the Sun. But according to Don Gurnett and Bill Kurth of the University of Iowa, even with this forewarning scientist were surprised when the crossing came a mere 30 days later, when the spacecraft was 83.7 AU from the Sun.

The crossing itself, Gurnett and Kurth explained, is not a single event because the termination shock itself keeps shifting its location. As a result Voyager 2 made the passage not once but at least five times, back and forth over the span of two days, before it was finally clear of that turbulent place. The five crossings were marked by sharp spikes registered on the plasma wave instrument and the magnetometer, and on two of the occasions by intense bursts of broadband electric field noise.

One of the most surprising results to come out of Voyager 2's crossing of the termination shock relates to the energy levels of the particles at the termination shock. Since the solar wind slows down drastically from a million miles an hour to less and a thousand, scientists expected the excess energy to appear as heat, raising the temperature of the solar wind plasma to around 1 million degrees Kelvin. But Voyager 2's measurements showed that the temperature reached only around 100,000 degrees Kelvin, raising the question of what happened to around 70% of the energy released by the solar wind particles.

The answer came from an unexpected source. Back in 2006 NASA launched twin spacecraft named STEREO A and B into orbits around the Sun to obtain three dimensional pictures of the surface of the Sun and measure solar magnetic fields and ion fluxes. But for four months, between June and October 2007, STEREO's sensors detected something else: a stream of highly energized neutral atoms flowing from a spot in the outer reaches of the solar system.

A bit of astronomical sleuthing revealed the nature of this unexpected discovery. The super-energized particles of the solar wind that arrive at the termination shock collide with the cold atoms of the interstellar medium, relinquishing both their charge and their energy. This explains the fate of the missing 70% of the total energy released by the solar wind: it goes towards energizing the cold particles of the interstellar medium which form the region beyond the termination shock known as the heliosheath. Meanwhile the solar wind atoms, shorn of their energy and no longer inhibited by their charge, flow back towards the Sun where they are captured by STEREO's sensors. Mystery solved.

"This is the first mapping of energetic neutral particles from the edge of the heliosphere" said Robert P. Lin of the University of California. "You can't get a global picture of this region . . . through normal telescopes" Lin said, and hence the importance of STEREO's discovery. In fact, Lin said, the unexpected detection "heralds a new kind of astronomy using neutral atoms," which can be used where more traditional methods fail.

Nearly 31 years into its epic journey Voyager 2 has passed beyond the heliosphere and into the heliosheath. The next stop is the "heliopause," marking the outer boundary of the Sun's influence and the true beginning of interstellar space. Will Voyager 2 report to Earth on this landmark as well? It is impossible to say. But judging by their unmatched track record, it seems more than likely that Voyager 2 and its twin, Voyager 1, will become humanity's first eyes and ears in the realm of the stars.