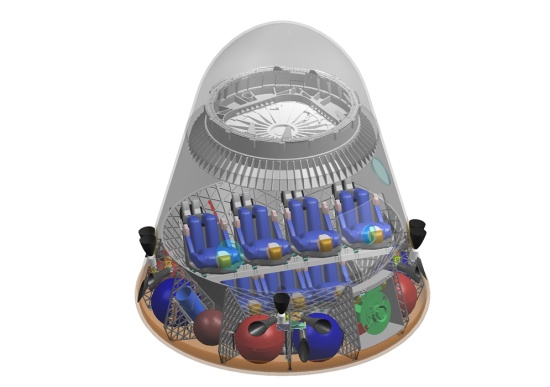 The rocket, which could one day carry astronauts, blasted-off from its launch pad at Cape Canaveral, Florida, at 1845 GMT.

Friday's first launch attempt was aborted at the last second because an engine parameter fell out of limits. But the second attempt went flawlessly, with the vehicle acieving orbit.

US President Barack Obama, who inspected the rocket on its pad in April, has said he wanted the business of taxiing astronauts to and from the International Space Station handed to the commercial sector.

Many commentators believe the Falcon is in a prime position to win that business.

Before the rocket can be allowed to launch humans, it has to first demonstrate performance and reliability in the role of lofting robotic spacecraft.

The Falcon 9 in its simplest form is a "single stick" vehicle with a two-stage configuration. A cluster of nine SpaceX-developed Merlin-1C engines power the rocket off the pad.

A single Merlin on the second stage completes the task of pushing the payload into orbit.

For its maiden flight, the Falcon 9 carried a cut-down version of its Dragon freighter - a blunt-nosed, 3.6m-wide capsule that will collect engineering performance data during the ascent.

On future flights, Dragon will be filled with supplies for the International Space Station.

Historically, the maiden flights of rockets have a notoriously high failure rate. Some two-thirds of the rockets introduced in the past 20 years have had an unsuccessful first outing.

Millionaire Elon Musk set up SpaceX in 2002 and has already flown a much smaller rocket called the Falcon 1.

To keep costs as low as possible, the Falcon 9 uses many of the same components and systems, including its kerosene/liquid-oxygen (LOX) burning Merlin engines.

SpaceX was awarded a $1.6bn contract by NASA in 2008 for up to 12 Falcon/Dragon missions to the ISS.

The Dragon freighter, once operational, is expected to be capable of hauling six tons of food, water, air, and equipment to the platform.

The company says it has designed Dragon in such a way that it can be converted relatively easily into a crew ship, if NASA so desires it (See figure).

The company claims that it would be ready to launch astronauts on the Falcon within three years of being given an ISS taxiing contract.

However, other space companies and their rockets will almost certainly be in competition for such work, including some of the established industry names like Boeing and Lockheed Martin.

SpaceX hopes the Falcon 9 can also take a sizeable share of the commercial satellite launch market.

It is quoting prices to put large telecommunications spacecraft in geostationary orbit that dramatically undercut current sector leaders, such as Europe's Ariane 5 and Russia's Proton vehicles.

But Rachel Villain from the respected space analysts Euroconsult said many in the satellite business were being cautious about SpaceX's future prospects.

"This is not new in the industry," she told BBC News.

The Planetary Society was quick to offer its congratulations to the SpaceX team. "It's hard not to launch into hyperbole at the success of the first Falcon 9 test flight. It is a tremendous achievement. Hats off to our Planetary Society Board member, Elon Musk, and his SpaceX team. In advancing commercial spaceflight, today's flight of Falcon 9 could be the first small step towards relieving NASA launchers of the burden of low-Earth orbit, thus freeing the U.S. space agency to reach new worlds."

"With this success for the commercial spaceflight industry, the United States is better positioned to ramp up its ambitions for exploring the solar system. The proposal to refocus NASA's human spaceflight program beyond low-Earth orbit now looks more achievable, as this flight demonstrated that commercial rockets may soon be ready to carry supplies and, we hope, astronauts to the International Space Station."

"Rocketry really is “rocket science.” To paraphrase John F. Kennedy, we chose to do these things because they are hard. Putting together a complex and dangerous piece of machinery like a multi-stage rocket and making it fly to orbit is an immensely challenging thing to do. Elon Musk and his team have done the hard thing and truly deserve our congratulations."