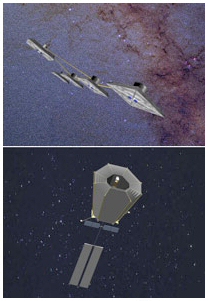 To meet this challenge, NASA has chosen to fly two separate missions with distinct and complementary architectures to achieve the goal of the Terrestrial Planet Finder. The purpose will be to take family portraits of stars and their orbiting planets, and to study those planets to see which, if any, might be habitable, or might even have life. Both missions would launch within the next 10 to 15 years.

The two missions are:

Terrestrial Planet Finder-C: a moderate-sized visible-light telescope, similar to the 4- by 6-meter (13.1- by 19.6-foot) version currently under study, to launch around 2014. Onboard coronagraph instrumentation will use a central disc and other specialized techniques to block the glare of a star, allowing detection and characterization of dimmer planets around it.

Terrestrial Planet Finder-I: multiple spacecraft carrying 3 to 4 meter (9 to 13 foot) infrared telescopes flying in precise formation, to launch before 2020, and to be conducted jointly with the European Space Agency. Combining the infrared, or heat radiation gathered by the multiple telescopes, using a technique called interferometry, will simulate a much larger telescope. This will enable the mission to detect and study individual planets orbiting a parent star observed by TPF-C and also new ones beyond the reach of TPF-C.

Observing extra-solar planets in both visible and infrared light allows scientists to obtain a rich set of data to understand what chemical processes may be going on at various levels in a planet's atmosphere and surface. That leads to understanding of whether a planet ever could or actually does harbor life. A review of these two plans will be conducted over the summer by NASA and the National Academy of Sciences Committee on Astronomy and Astrophysics. Two other architectures that were studied, the large visible coronagraph and the structurally connected infrared interferometer, will be documented and further studies concluded this summer.

Terrestrial Planet Finder is managed by NASA's Jet Propulsion Laboratory, Pasadena, Calif., for NASA's Office of Space Science, Washington, D.C. It is part of NASA's Origins program, a series of missions and studies designed to answer the questions: Where did we come from? Are we alone?