U of Chicago South Pole Telescope Searches for Dark Energy 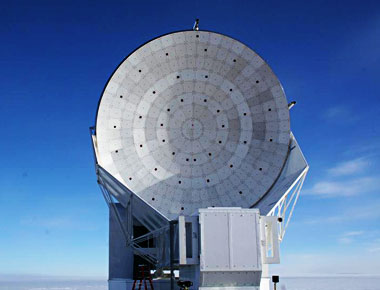 Controlled remotely from the University of Chicago, the $19.2-million South Pole Telescope (SPT) has begun to search the southern polar heavens for shreds of evidence of dark energy. The discovery of dark energy in 1998 was completely unexpected. Understanding its nature is one of the biggest problems in physics. Scientists believe dark energy, which makes up 70 per cent of the Universe, is driving its accelerating expansion. If this expansion continues to accelerate experts say it could eventually lead to a Big Freeze as the Universe is pulled apart and becomes a vast cold expanse of dying stars and black holes.

“The telescope, camera and optics are all working as designed,” said John Carlstrom, Professor of Astronomy and Astrophysics at the University of Chicago, who heads the SPT Team. “First light with the SPT is a major milestone for the project and is a fitting conclusion to a remarkably productive summer season for the South Pole Station. We now look forward to fully characterizing the instrument and beginning cosmological observations,” he said.

“It’s not incorrect to think of dark energy as acting like negative gravity,” said Carlstrom. “We’re looking at a tug-of-war with dark energy and gravity trying to expand or collapse the universe.”

“It gets really, really cold, because you aren’t moving much. There’s steel behind you, steel in front of you and you’re holding steel tools,” said Joaquin Vieira, a graduate student in Physics who helped assemble the telescope at the South Pole.

Edward “Rocky” Kolb, Professor of Astronomy and Astrophysics, who recently chaired the Dark Energy Task Force formed by the U.S. Department of Energy, NASA and the NSF, predicts that future dark-energy research will likely require bigger and more powerful telescopes, perhaps those based in space. “We in astronomy think dark energy is a billion-dollar question. We feel it is that fundamental. It is a big question that will require a big effort to answer it.”

Carlstrom noted that the search for answers about dark energy is one of the great quests of human inquiry. “I think it’s absolutely amazing that we’re out looking at origins of the universe, and we are discovering new laws of physics as we go. Who knows what you will find when you discover new laws of physics? There are a lot of bright people who will see applications in it, and who knows what they will come up with?”

The telescope stands 75 feet tall, measures 33 feet across and weighs 280 tons. It was test-built in Kilgore, Texas, then taken apart, shipped by boat to New Zealand, and flown to the South Pole.

As with any construction project at the Earth’s southern extremity, the SPT was supported by a long and complex logistical chain stretching around the globe. All cargo to the South Pole is delivered by ski-equipped LC-130 aircraft and the components must be able to be broken down to fit into the aircraft cargo bay. The aircraft, flown by the N.Y. Air National Guard, are elements of Operation Deep Freeze, the military support arm of the U.S. Antarctic Program, which also includes Air Force cargo jets, U.S. Coast Guard icebreakers, Navy cargo handlers and many other logistical and personnel assets.

The SPT is designed to pierce the mystery of dark energy. The solution to that question will determine whether what Einstein considered his greatest blunder was actually one of his greatest achievements.

Astrophysicists know that the universe has been expanding since the big bang occurred approximately 14 billion years ago. In 1998, astronomers using exploding stars as cosmic tape measures discovered that the expansion of the universe is accelerating. This led them to the idea that dark energy pushes the universe apart, counteracting gravity, the attractive force exerted by all matter in the universe.

“We would like to know what makes the universe evolve,” said Stephan Meyer, Professor of Astronomy and Astrophysics at the University of Chicago.

Astronomers work at the South Pole station to take advantage of excellent viewing conditions. The cold, dry atmosphere above the South Pole will allow the SPT to more easily detect the Cosmic Microwave Background (CMB) radiation, the afterglow of the big bang, with minimal interference from water vapor. On the electromagnetic spectrum, the CMB falls somewhere between heat radiation and radio waves.

The CMB is largely uniform, but it contains tiny ripples of varying density and temperature. These ripples reflect the seeds that, through gravitational attraction, grew into the galaxies and galaxy clusters visible to astronomers in the sky today. The SPT’s first key science project will be to study small variations in the CMB to determine if dark energy began to affect the formation of galaxy clusters by fighting against gravity over the last few billion years.

Galaxy clusters are groups of galaxies, the largest celestial bodies that gravity can hold together. “Our galaxy, the Milky Way, is in one of these clusters,” Meyer said. “And these clusters of galaxies actually change with time.”

The CMB allows astronomers to take snapshots of the infant universe, when it was only 400,000 years old. No stars or galaxies had yet formed. If dark energy changed the way the universe expanded, it would have left its “fingerprints” in the way that it forced galaxies apart over the deep history of time. Different causes would produce a different pattern in the formation of galaxy clusters as reflected in the distortion of the CMB.

According to one idea, dark energy could be Einstein’s cosmological constant: a steady force of nature operating at all times and in all places. Einstein introduced the cosmological constant into his theory of general relativity to accommodate a stationary universe, the dominant idea of the day. If Einstein’s idea is correct, scientists will find that dark energy was much less influential in the universe five billion years ago than it is today.

“Clusters weren’t around in the early universe. They took a long time to evolve,” Carlstrom said.

Another version of the dark energy theory, called quintessence, suggests a force that varies in time and space. Some scientists even suggest that there is no dark energy at all, and that gravity merely breaks down on vast intergalactic scales.

To pinpoint when dark energy became important, the SPT will use a phenomenon called the Sunyaev-Zeldovich effect. This effect distorts the CMB as it passes through the hot gas of intervening galaxy clusters. As the microwaves interact with gas in the clusters, some of the microwaves get kicked into a higher frequency. The SPT will measure the slight temperature difference associated with the frequency change and produce an image of the gas in the cluster.

The SPT can scan large regions of the sky quickly. Scientists expect it to detect thousands, or even tens of thousands, of galaxy clusters within a few years. “To get a meaningful constraint on dark energy through measuring galaxy clusters, you need something like this South Pole Telescope for the S-Z work,” Carlstrom said. “The cluster S-Z signals cover small patches of the sky relative to the intrinsic variations in the cosmic microwave background. To get the necessary resolution, you need a big telescope. Now we have one.”

First light for the SPT also was a historical milestone because it occurred almost exactly 50 years after a team of 18 men spent the first winter in history at the South Pole as part of the 1956-57 IGY (International Geophysical Year).

Under the joint leadership of scientists Paul Siple and Lt. John Tuck, a naval officer, 18 men spent the first winter at the South Pole in a station built by the U.S. Navy in the austral summer of 1956-57, using cargo dropped by U.S. Air Force planes. On Jan. 23, 1957, an official dedication ceremony for the South Pole Station was held at McMurdo Station with speeches, marines in full dress uniforms and a radio proclamation from President Eisenhower.

Siple, Tuck and the 16 other “winterovers” were the first people in history to witness sunset and sunrise at the South Pole, events that are separated in Antarctica by six months of darkness and almost unimaginable cold. In the depths of the austral winter at the station, the temperature dropped to -74.5 degrees Celsius (-102.1 degrees Fahrenheit) on Sept. 18, 1957, the coldest temperature ever recorded on Earth at the time.

“We were like men who had been fired off in rockets to take up life on another planet. We were in a lifeless, and almost featureless world. However snug and comfortable we might make ourselves, we could not escape from our isolation. We were now face to face with raw nature so grim and stark, that our lives could be snuffed out in a matter of minutes. Every day would bring us new problems to solve and our ingenuity would be taxed over and over again. And all this to carry out a somewhat difficult fragment of the worldwide scientific program of the International Geophysical Year,” wrote Siple in his memoir, “Living at the Pole.”

The men laid the foundation for the scientific legacy that continues into the 21st century, as the National Science Foundation prepares to dedicate the third permanent station at the South Pole for the fourth International Polar year 2007-2008, a global scientific campaign involving more than 60 nations.