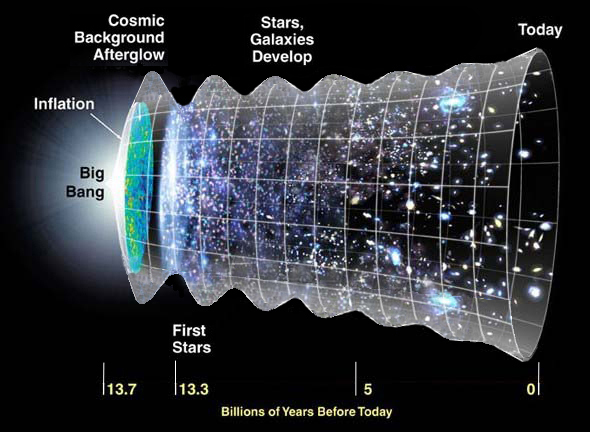 According to scientists, the universe began with a "big bang" and expanded to the size it is today. Yet, the gravity of all of this matter -- stars, gas, galaxies, and mysterious dark matter -- tries to pull the universe back together, slowing down the expansion.

Lawrence Mead and Harry Ringermacher, two physicists at the University of Southern Mississippi, have discovered that the universe might not only be expanding, but also oscillating or "ringing" at the same time.

In 1978 Arno Penzias and Robert Wilson received the Nobel prize for their 1964 discovery of the key signature of this theory, the primal radiation from the early universe known as the Cosmic Microwave Background (CMB).

"Then in 1998 the finding that the universe was not only expanding, but was speeding up, or accelerating in its expansion was a shock when it was discovered simultaneously by east coast and west coast teams of astronomers and physicists," said Mead. "A new form of matter -- dark energy -- repulsive in nature, was responsible for the speed-up. The teams led by Saul Perlmutter, Adam Riess, and Brian Schmidt won the 2011 Nobel Prize in Physics for that discovery."

According to Mead and Ringermacher, this change from slowing down to speeding up (the transition time) took place approximately 6 to 7 billion years ago. Since then, Mead and Ringermacher say a vast accumulation of high-tech data has verified the theory to extraordinary accuracy.

The diagram represents the events of the Big Bang from the beginning of time to the present day as described by the current, accepted model known as CDM or Lambda Cold Dark Matter, where the Greek Lambda stands for Einstein's cosmological constant. This cosmological constant is responsible for the acceleration of the universe. The outline of the bell-shaped universe represents its expanding size. The transition time is the point in time at which the bell shape shifts from going inward to outward from left to right.

"The new finding suggests that the universe has slowed down and sped up not just once, but 7 times in the last 13.8 billion years, on average emulating dark matter in the process," said Mead. "The ringing has been decaying and is now very small, much like striking a crystal glass and hearing it ring down."

The diagram shows the new finding superposed on the CDM model. Ringermacher and Mead have determined that this oscillation is not a wave moving through the universe, such as a gravitational wave, but rather it is a "wave of the universe."

Ringermacher says the discovery was made accidentally when, through their collaboration on dark matter modeling of galaxies, they found a new way of plotting a classic textbook graph describing the scale of the universe against its age (lookback time) that did not depend on one's prior choice of models of the universe, as was traditional.

"The standard graph, the Hubble diagram, is constructed by astronomers observing the distances of Type 1A Supernovae that serve as standard candles for measuring the expansion of the universe," said Ringermacher. "Analyzing this new plot to locate the transition time of the universe, we found there was more than one such time -- in fact multiple oscillations with a frequency of about 7 cycles over the lifetime of the universe. It is space itself that has been speeding up its expansion followed by slowing down 7 times since creation."

Mead and Ringermacher say this finding must ultimately be verified by independent analyses, preferably of new supernovae data, to confirm its reality. In the meantime, their work into the ringing of the universe continues.