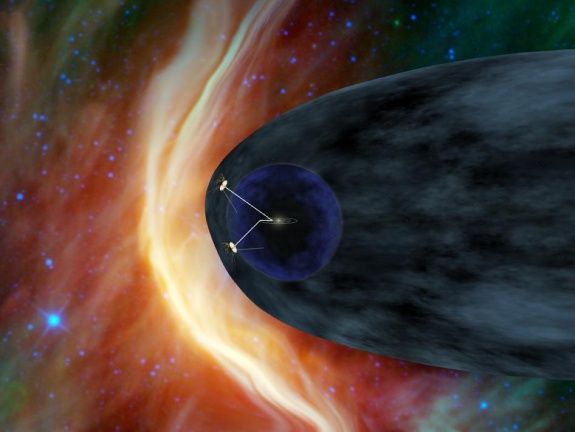 In which direction is the sun's stream of charged particles banking when it nears the edge of the solar system? The answer, scientists know, is blowing in the wind. It's just a matter of getting NASA's Voyager 1 spacecraft in the right orientation to detect it.

To enable Voyager 1's Low Energy Charged Particle instrument to gather these data, the spacecraft performed a maneuver on March 7, 2011 that it hadn't done for 21 years, except in a preparatory test last month.

At 12:10 p.m. EST, humanity's most distant spacecraft rolled 70 degrees counterclockwise as seen from Earth from its normal orientation and held the position by spinning gyroscopes for two hours, 33 minutes. The last time either of the two Voyager spacecraft rolled and stopped in a gyro-controlled orientation was Feb. 14, 1990, when Voyager 1 snapped a family portrait of the planets strewn like tiny gems around our sun.

"Even though Voyager 1 has been traveling through the solar system for 33 years, it is still a limber enough gymnast to do acrobatics we haven't asked it to do in 21 years," said Suzanne Dodd, Voyager project manager, based at NASA's Jet Propulsion Laboratory in Pasadena, California. "It executed the maneuver without a hitch, and we look forward to doing it a few more times to allow the scientists to gather the data they need."

The two Voyager spacecraft are traveling through a turbulent area known as the heliosheath. The heliosheath is the outer shell of a bubble around our solar system created by the solar wind, a stream of ions blowing radially outward from the sun at a million miles per hour. The wind must turn as it approaches the outer edge of the bubble where it makes contact with the interstellar wind, which originates in the region between stars and blows by our solar bubble.

In June 2010, when Voyager 1 was about 11 billion miles away from the sun, data from the Low Energy Charged Particle instrument began to show that the net outward flow of the solar wind was zero. That zero reading has continued since. The Voyager science team doesn't think the wind has disappeared in that area. It has likely just turned a corner. But does it go up, down or to the side?

"Because the direction of the solar wind has changed and its radial speed has dropped to zero, we have to change the orientation of Voyager 1 so the Low Energy Charged Particle instrument can act like a kind of weather vane to see which way the wind is now blowing," said Edward Stone, Voyager project scientist, based at the California Institute of Technology, Pasadena. "Knowing the strength and direction of the wind is critical to understanding the shape of our solar bubble and estimating how much farther it is to the edge of interstellar space."

Voyager engineers performed a test roll and hold on Feb. 2, 2011 for two hours, 15 minutes. When data from Voyager 1 was received on Earth some 16 hours later, the mission team verified the test was successful and the spacecraft had no problem in reorienting itself and locking back onto its guide star, Alpha Centauri.

The Low Energy Charged Particle instrument science team confirmed that the spacecraft had acquired the kind of information it needed, and mission planners gave Voyager 1 the green light to do more rolls and longer holds. There will be five more of these maneuvers over the next seven days, with the longest hold lasting three hours 50 minutes. The Voyager team plans to execute a series of weekly rolls for this purpose every three months.

The success of the March 7th roll and hold was received at JPL at 4:21 a.m. EST on March 8th. But it will take a few months longer for scientists to analyze the data.

"We do whatever we can to make sure the scientists get exactly the kinds of data they need, because only the Voyager spacecraft are still active in this exotic region of space," said Jefferson Hall, Voyager mission operations manager at JPL. "We were delighted to see Voyager still has the capability to acquire unique science data in an area that won't likely be traveled by other spacecraft for decades to come."

The solar wind's outward flow has not yet diminished to zero where Voyager 2 is exploring, but that may happen as the spacecraft approaches the edge of the bubble in the years ahead.

The Voyagers were built by NASA's Jet Propulsion Laboratory in Pasadena, Calif., which continues to operate both spacecraft. JPL is a division of the California Institute of Technology in Pasadena. The Voyager missions are a part of the NASA Heliophysics System Observatory, sponsored by the Heliophysics Division of the Science Mission Directorate.