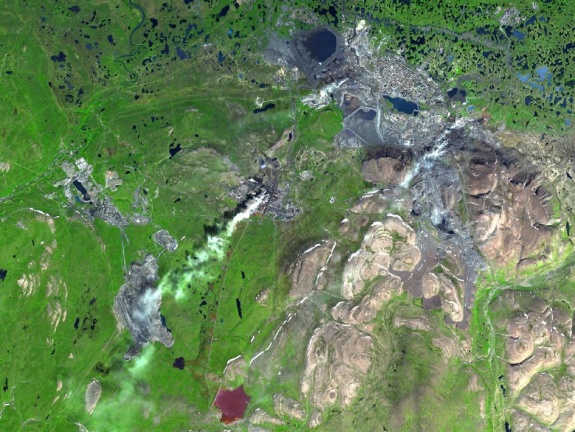 According to a new study by geologists at the University of Toronto and the University of Maryland, the wealth of some minerals that lie in the rock beneath the Earth's surface may be extraterrestrial in origin.

"The extreme temperature at which the Earth's core formed more than four billion years ago would have completely stripped any precious metals from the rocky crust and deposited them in the core," said Professor James Brenan of geology at University of Toronto.

"So, the next question is why are there detectable, even mineable, concentrations of precious metals such as platinum and rhodium in the rock portion of the Earth today? Our results indicate that they could not have ended up there by any known internal process and instead must have been added back, likely by a 'rain' of extraterrestrial debris such as comets and meteorites."

Geologists have long speculated that four and a half billion years ago, the Earth was a cold mass of rock mixed with iron metal that was melted by the heat generated from the impact of massive planet-sized objects, allowing the iron to separate from the rock and form the Earth's core. Brenan and colleague William McDonough of the University of Maryland recreated the extreme pressure and temperature of this process, subjecting a similar mixture to temperatures above 2,000 Degrees Centigrade and measured the composition of the resulting rock and iron.

Because the rock became void of the metal in the process, the scientists speculate that the same would have occurred when the Earth was formed and that some sort of external source - such as a rain of extraterrestrial material - contributed to the presence of some precious metals in Earth's outer rocky portion today.

"The notion of extraterrestrial rain my also explain another mystery, which is how the rock portion of the Earth came to have hydrogen, carbon and phosphorous - the essential components for life, which were likely lost during Earth's violent beginning."

The research was funded with the support of the Natural Sciences and Engineering Research Council of Canada and a NASA cosmochemistry grant.