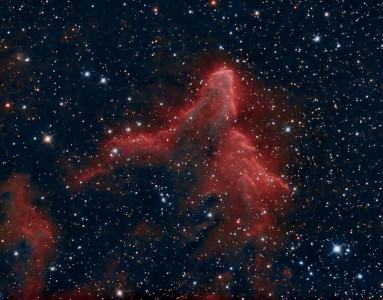 The Ghost of Cassiopeia

ESA's Venus Express has made unique observations of Venus during a period of reduced solar wind pressure, discovering that the planet's ionosphere balloons out like a comet's tail on its night-side.

The ionosphere is a region of weakly electrically charged gas high above the main body of a planet's atmosphere. Its shape and density are partly controlled by the internal magnetic field of the planet.

For Earth, which has a strong magnetic field, the ionosphere is relatively stable under a range of solar wind conditions. By comparison, Venus does not have its own internal magnetic field and relies instead on interactions with the solar wind to shape its ionosphere.

The extent to which this shaping depends on the strength of the solar wind has been controversial, but new results from Venus Express reveal for the first time the effect of a very low solar wind pressure on the ionosphere of a non-magnetized planet.

The observations were made in August 2010 when NASA's Stereo-B spacecraft measured a drop in solar wind density to 0.1 particles per cubic centimeter, around 50 times lower than normally observed. This persisted for about 18 hours.

As this significantly reduced solar wind hit Venus, Venus Express saw the planet's ionosphere balloon outwards on the planet's downwind night-side, much like the shape of the ion tail seen streaming from a comet under similar conditions.

"The teardrop-shaped ionosphere began forming within 30 to 60 minutes after the normal high pressure solar wind diminished. Over two Earth days, it had stretched to at least two Venus radii into space," says Yong Wei of the Max Planck Institute for Solar System Research in Germany.

The new observations settle a debate about how the strength of the solar wind affects the way in which ionospheric plasma is transported from the day-side to the night-side of Venus.

Usually, this material flows along a thin channel in the ionosphere, but scientists were unsure what happens under low solar wind conditions. Does the flow of plasma particles increase as the channel widens due to the reduced confining pressure, or does it decrease because less force is available to push plasma through the channel?

"We now finally know that the first effect outweighs the second, and that the ionosphere expands significantly during low solar wind density conditions," says Markus Fraenz, also of the Max Planck Institute.

A similar effect is also expected to occur around Mars, the other non-magnetized planet in our inner Solar System.

"We often talk about the effects of solar wind interaction with planetary atmospheres during periods of intense solar activity, but Venus Express has shown us that even when there is a reduced solar wind, the Sun can still significantly influence the environment of our planetary neighbors," adds Hakan Svedhem, ESA's Venus Express Project Scientist.