Why Are Quasars Mysteriously Aligned Across Billions of Light Years? 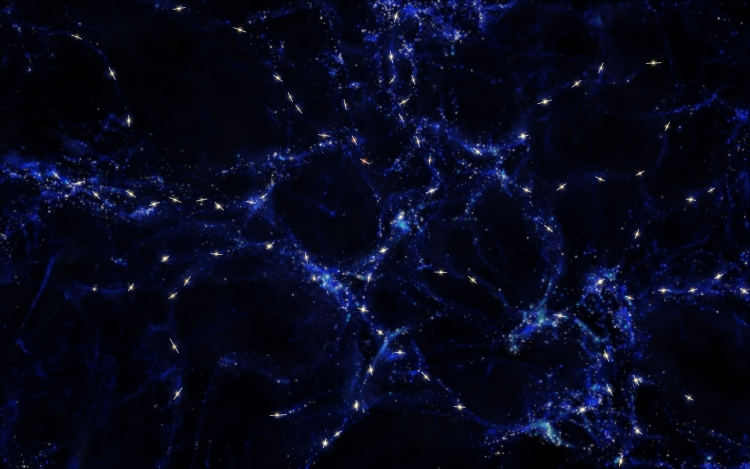 Quasars are galaxies with very active supermassive black holes at their centers. These black holes are surrounded by spinning discs of extremely hot material that is often spewed out in long jets along their axes of rotation. Quasars can shine more brightly than all the stars in the rest of their host galaxies put together.

New observations with ESO's Very Large Telescope (VLT) in Chile have revealed alignments over the largest structures ever discovered in the Universe. A European research team has found that the rotation axes of the central supermassive black holes in a sample of quasars are parallel to each other over distances of billions of light-years. The team has also found that the rotation axes of these quasars tend to be aligned with the vast structures in the cosmic web in which they reside.

A team led by Damien Hutsemekers from the University of Liege in Belgium used the FORS instrument on the VLT to study 93 quasars that were known to form huge groupings spread over billions of light-years, seen at a time when the Universe was about one third of its current age.

"The first odd thing we noticed was that some of the quasars' rotation axes were aligned with each other, despite the fact that these quasars are separated by billions of light-years," said Hutsemekers.

The team then went further and looked to see if the rotation axes were linked, not just to each other, but also to the structure of the Universe on large scales at that time.

When astronomers look at the distribution of galaxies on scales of billions of light-years they find that they are not evenly distributed. They form a cosmic web of filaments and clumps around huge voids where galaxies are scarce. This intriguing and beautiful arrangement of material is known as large-scale structure.

The new VLT results indicate that the rotation axes of the quasars tend to be parallel to the large-scale structures in which they find themselves. So, if the quasars are in a long filament then the spins of the central black holes will point along the filament. The researchers estimate that the probability that these alignments are simply the result of chance is less than one percent.

"A correlation between the orientation of quasars and the structure they belong to is an important prediction of numerical models of evolution of our Universe. Our data provide the first observational confirmation of this effect, on scales much larger that what had been observed to date for normal galaxies," adds Dominique Sluse of the Argelander-Institut für Astronomie in Bonn, Germany and the University of Liege.


The team could not see the rotation axes or the jets of the quasars directly. Instead they measured the polarization of the light from each quasar and, for 19 of them, found a significantly polarized signal. The direction of this polarization, combined with other information, could be used to deduce the angle of the accretion disc and hence the direction of the spin axis of the quasar.

"The alignments in the new data, on scales even bigger than current predictions from simulations, may be a hint that there is a missing ingredient in our current models of the cosmos," concludes Dominique Sluse.