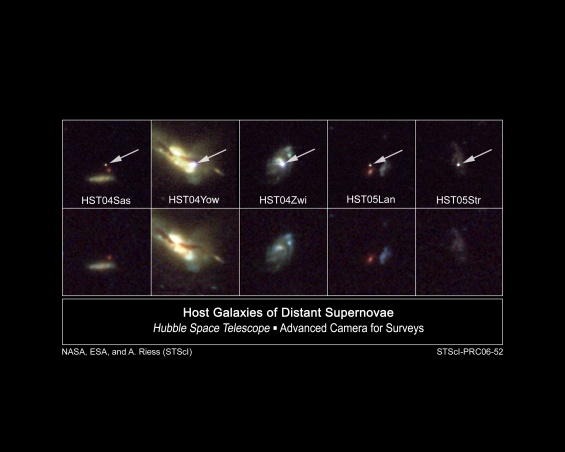 Saul Perlmutter of the University of California - Berkeley, Adam Riess of Johns Hopkins University, and Brian Schmidt of Australian National University's Mount Stromlo and Siding Spring Observatories have been awarded the 2011 Nobel Prize in Physics for discovering that galaxies are receding from one another faster now than they were billions of years ago. The accelerating expansion means that the universe could expand forever until, in the distant future, it becomes cold and dark. The teams' discovery led to speculation that there is a "dark energy" that is pushing the universe apart. Though dark energy theoretically makes up 73 percent of the matter and energy of the universe, astronomers and physicists have so far failed to discover the nature of this strange, repulsive force.

Doesn't anyone proof read before they post? Expansion does not have a "T" in it. This is destressing to see in a science publication.<br><br>Annoyed

<br>James:<br><br>Good catch. Sorry about that.<br><br>You are correct and I should be more careful in my proof reading, especially with the title of a News Posting.<br><br>BTW - "distressing" is spelled with an "i" not an "e"<br><br>Thanks,<br><br>Guy<br><br><br><blockquote class="blockquote"><div class="italic"><i>James Somers said:</i><br><br>Doesn't anyone proof read before they post? Expansion does not have a "T" in it. This is destressing to see in a science publication.<br><br>Annoyed</div></blockquote>

Must it be acceleration? Maybe there's just more dust out there than anticipated. That's why the supernovae are fainter. Or maybe as we observe larger segments of the universe the rule that brightness varies by the inverse of the square of the distance becomes less correct cus those proposed extra dimensions bleed some of the light energy away. Why MUST it be 'dark energy'?