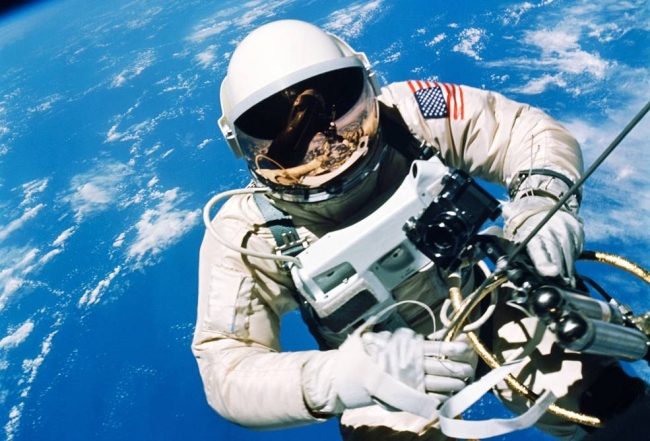 This year, the world celebrates 50 years of spacewalks or Extra-Vehicular Activities (EVA) that began with the first EVA conducted by Russian cosmonaut Alexei Leonov on March 18, 1965 and three months later by American astronaut Edward White on June 3, 1965. After a distinguished career, Major General Leonov became the commander of the cosmonaut team and deputy director of the Yuri Gagarin Cosmonaut Training Center, where he oversaw crew training. Tragically, Lieutenant Colonel White and his crewmates Gus Grissom and Roger Chaffee died on January 27, 1967, in the Apollo 1 flash fire during a launch pad test at Kennedy Space Center.

When Gemini IV astronaut Ed White emerged from his spacecraft into the blackness of space, he became the first American to walk in space. For more than 20 minutes, White maneuvered himself around the Gemini spacecraft while it traveled from over Hawaii to the Gulf of Mexico -- making his orbital stroll 6,500 miles long. White was attached to the spacecraft by a 25 foot umbilical line and a 23 foot tether line, both wrapped in gold tape to form one cord. The visor of his helmet was gold plated to protect him from the unfiltered rays of the sun. In his right hand, White carried a Hand Held Self Maneuvering Unit, which he used to move about the weightless environment of space. Unfortunately, the gas powered unit ran out of fuel after only 3 minutes. For the remainder of the space walk White maneuvered by twisting his body and tugging on the umbilical cord.

Gemini IV was the second crewed launch of Project Gemini, often referred to as NASA's "Bridge to the Moon." Although overshadowed by the success of the Apollo Moon landing program, Gemini provided a spectacular leap forward from the rudimentary single person capsules of Project Mercury. In the course of just 20 months, from March 1965 to November 1966, ten Gemini missions demonstrated that not only could crews survive in space for the amount of time it would take to get to the Moon and back, but that they could bring their spacecraft together with split second accuracy and that they could safely work and walk in space.


Ed White was a graduate of the United States Military Academy (USMA) at West Point, and like mission commander Jim McDivitt (a University of Michigan graduate), was a member of NASA's second class of astronauts. McDivitt went on to command the Apollo 9 mission before becoming Manager of the Apollo Spacecraft Program. He left NASA and the US Air Force as a Brigadier General in 1972, had a long career in industry, and is now retired. White was chosen to be a member of the Apollo 1 crew -- the mission planned as the first flight of NASA's three person Apollo spacecraft. Tragically, Lieutenant Colonel White and his crewmates Gus Grissom and Roger Chaffee died on January 27, 1967, in the Apollo 1 flash fire during a launch pad test at Kennedy Space Center.