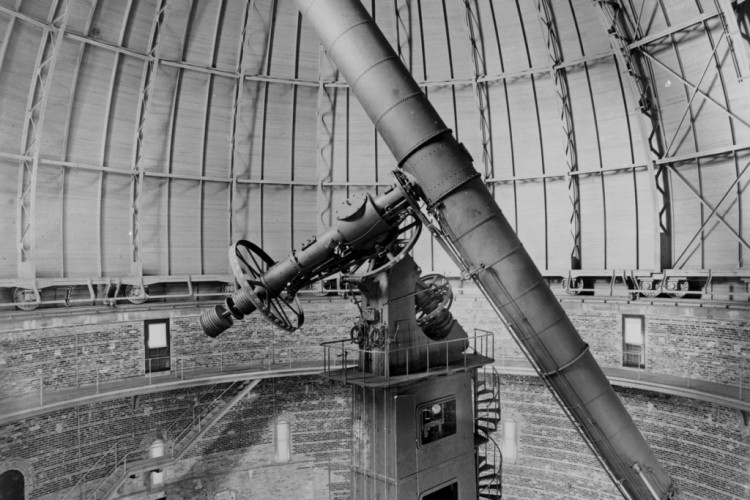 The Yerkes Observatory in the Village of Williams Bay, Wisconsin, on the shores of Geneva Lake in Walworth County, was completed in 1897. The observatory contains the largest refractor telescope in the world and is often referred to as “the birthplace of modern astrophysics.” The Chicago millionaire Charles Tyson Yerkes Jr. provided funding starting in 1892 to construct the Great Refractor and build the observatory that bears his name. He donated the facility to the University of Chicago in October 1897. The university owned Yerkes Observatory until May 1, 2020 when it, together with fifty acres of surrounding land, was donated to the Yerkes Future Foundation, an independent, charitable, nonprofit organization. The Observatory and grounds are currently undergoing restoration and renovation in order to prepare for public access later this year (or possibly next) and to ready the Yerkes landmark for another 125 years of science and discovery.

"In the 1980s, Perkin-Elmer’s opticians manufactured the mirror for the Hubble Space Telescope."
We all know how that one turned out...


A great article about the facility a suggested read... This has to be one of the coolest places for an astronomer to visit at any level of the hobby. A 40" yard cannon one can only wish. I've had the opportunity in the past to observe through a very large refractor and it's surprising what you can't see with one this big.

How many optical manufacturers are there out there that have built a telescope for use in zero-gravity? The Hubble turned out well after a few tweaks.

" The Hubble turned out well after a few tweaks."
As good as the primary optic in the Yerkes was from its inception, the Hubble was the exact opposite from its beginnings. To wit, "NASA found that Perkin-Elmer did not review or supervise the mirror construction adequately, did not assign its best optical scientists to the project (as it had for the prototype), and in particular did not involve the optical designers in the construction and verification of the mirror." Compare that with the careful construction of the Yerkes objective and the craftsmen who created it. Moreover, in the case of the spherical aberration of the Hubble optic , " nearly all the cosmological programs were essentially impossible". This required FIVE servicing missions and can't be trivialized as a " a few tweeks."
https://en.wikipedia.org/wiki/Hubble_Space_Telescope

I took a tour of the Observatory many years ago. It was a magical place. They just don't build them like this any more.

Now that's what I call a refractor!

I had a chance to tour Yerkes a few years ago as a birthday gift from my wife. It is such a cool looking place to see in person. I also had the opportunity to do some viewing through the refractor. I'll never forget the view of Jupiter through it. It was very neat to know I looked through the same telescope as Einstein!