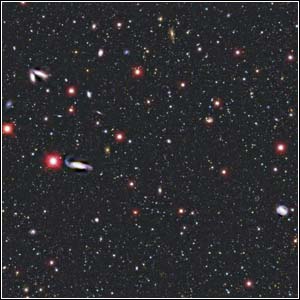 Astronomers have peered into the fog of the early universe and discovered a young and extremely distant galaxy at a time when the Universe was only about six percent of its present age. When compared with other recent findings about the “dark ages” of the early universe, this discovery suggests that this murky era could have lasted the better part of a billion years.

These “dark ages” began about a million years after the Big Bang, when most ordinary matter had condensed into a pervasive “fog” of neutral hydrogen. They ended when the first stars formed in the earliest galaxies and ionized the gas. However, much remains mysterious about this transitional period in the cosmic history—when it took place, how it occurred, where and when the first stars were formed, and what became of them. The new observations suggest that the transition from the dark ages to the modern Universe was a gradual and complex process.

The newly detected galaxy, designated LALA J142442.24+353400.2, was discovered in the constellation Boötes using data from the Large Area Lyman Alpha (LALA) survey, led by James Rhoads and Sangeeta Malhotra of the Space Telescope Science Institute, Baltimore, MD. This survey takes advantage of observations of the same portions of the northern and southern skies as the NOAO Deep Wide-Field Survey, led by Buell Jannuzi and Arjun Dey of the National Optical Astronomy Observatory. Both surveys have been conducted using the National Science Foundation’s 4-meter Mayall telescope at the Kitt Peak National Observatory and 4-meter Blanco telescope at the Cerro Tololo Inter-American Observatory. The nature of the newly discovered galaxy was confirmed using a spectrum obtained at the international Gemini North 8-meter telescope on Mauna Kea, Hawaii.

The galaxy was discovered by searching the sky for objects with strong emission lines in their spectra. While starlight from galaxies has a spectrum that is generally smooth (like the spectrum of an incandescent light bulb), those galaxies where new stars are forming can emit several percent of their light at a few discrete wavelengths, which appear as sharp lines in their spectra. These emission lines are created when interstellar hydrogen (or some other element) absorbs ultraviolet light from young stars and re-emits the energy in specific lines. (Neon lights produce their intensely colored glow by a similar process.)

The LALA survey works by taking images of the night sky through special colored “narrowband” filters that admit only a narrow range of color (“narrowband filters”). Star-forming galaxies with emission lines in the admitted color range appear much brighter in the LALA survey image than they do in parallel images of the same galaxy taken by the NOAO Deep Wide-Field Survey.

Because light gets redder as it moves through the expanding Universe, the chosen color of a narrowband filter determines the distances where galaxies will be found by that filter. Moreover, the narrowband color can be chosen at a special “window” where the night sky is particularly dark, which allows faint, distant galaxies to be seen more easily and results in a very efficient search.

The spectrum from the Gemini telescope showed a prominent hydrogen emission line, which allowed the distance of the galaxy to be measured at 12.8 billion light years (redshift [z] =6.535), or about 850 million years after the Big Bang.

The era of LALA J142442.24+353400.2 corresponds to the end of the so-called “dark ages.” Around this time, the ultraviolet light from the first stars ionized the hydrogen gas that filled intergalactic space, and in the process heated it from temperatures around 20 degrees above absolute zero (-253 degrees C or -432 degrees F) to over 10,000 degrees C (18,000 degrees F), a process called “reionization”.

The emission line seen in the LALA galaxy is the Lyman-alpha line and is produced by neutral hydrogen. Prior to reionization, neutral hydrogen filling the space between galaxies would act as a scattering “fog” for the Lyman alpha line. “This fog would blur our view of the galaxy, effectively hiding it from a survey like LALA,” Rhoads says. “Thus, the detection of this galaxy in the LALA narrowband image implies that reionization of the universe was well under way by the era when we observed this galaxy.”

Previous studies of reionization based on spectra of luminous quasars obtained by Sloan Digital Sky Survey consortium have concluded that neutral gas in intergalactic space survived to a somewhat more recent epoch (around redshift z=6.2). Another approach, using observations of the cosmic microwave background radiation from NASA’s Wilkinson Microwave Anisotropy Probe satellite, suggests that reionization may have started as early as redshift 15 or 20.

“While much of the intergalactic gas was probably ionized already by the time of the galaxy we found, a substantial minority could have remained neutral,” Rhoads explains. “By combining our observations with the Sloan and WMAP results, we can assemble a more complete understanding, which shows that reionization was a complex process lasting the better part of a billion years.”

The conclusions from LALA J142442.24+353400.2 are supported by a handful of other line emitting galaxies at similar redshift that have been published by Esther Hu and collaborators at the University of Hawaii and by Keiichi Kodaira at the National Astronomical Observatory of Japan.

The result could be bolstered by finding substantially larger samples in future, Rhoads adds, and further theoretical analysis of how Lyman alpha photons travel in the early universe would also be beneficial. Finally, more sensitive images of the starlight from LALA J142442.24+353400.2 are planned using the Hubble Space Telescope, which will help provide data to better understand its physical nature.

NOAO is operated by the Association of Universities for Research in Astronomy (AURA) Inc., under a cooperative agreement with the National Science Foundation.