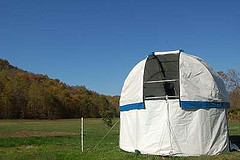 I would like to offer up a few thoughts on the Astrogizmos Astrogazer Observatory. I have made a video of the installation which can be seen here...

...and which should show most of what I am talking about here.

I used this observatory as a permanent setup for two years, from the Fall of 2008 until Fall 2010. In that period of time, I found it to be an absolutely wonderful installation, and I can whole-heartedly recommend this observatory. The cost is quite reasonable and the functionality of the building is excellent. With that said, I can offer a few pointers to anyone who may be interested in setting up an AstroGazer.

When I received the observatory, I was initially overwhelmed by how many pieces there were. It looks like something which would be an awful puzzle to assemble. However, the ends of each connecting tube are color coded, and I was able to set the observatory up in only about two hours, solo, the first time!

I located the observatory in an enclosed area just off my patio. It was surrounded on two sides by a six-foot privacy fence, on another side by a greenhouse, and on the last side - and most importantly for wind, the west side - by my home. Although the AstroGazer made a good permanent installation in this location, I would not recommend it as a permanent building in an open area. More on this later.

The setup of the building itself doesn't amount to much, but if you are going to make a permanent installation, then you will probably spend a lot more time on the extra features. The main improvements I made were a carpeted floor, a good quality electrical system, bracing inside the dome for snow loads, and many extra brace wires and ropes which made the observatory nearly wind-proof there in its protected, fenced area next to my patio.

The floor was made by taking about ten layers of cheap tarp, and one very good tarp, and laying them across the ground in the bottom of the observatory. Then I cut the edges of the tarps about ten inches too large, and wrapped them up the insides of the walls. I then used wire ties and duct tape to secure them to the walls. The carpet was cut the same way and filleted up at the edges just the same. This worked well and seemed to be pretty moisture-proof. The grey commercial carpet added greatly to the feel that this was a "real" observatory.

I braced the dome by making an X with plastic pipe between the two halves of the dome, on the side of the slit which I never used. This was the single biggest improvement I made to the observatory. This kept the two sides of the dome from flexing independently when it was turned, and it greatly improved the ability of the dome to carry snow loads. I had as much as ten inches of snow on the dome without trouble! 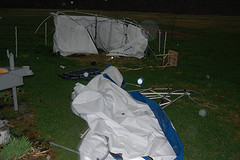 The electrical system was a set of heavy duty short extension cords run to power strips which were wire-tied to the vertical members of the walls. I had outlets at five locations and this really made things convenient. A GFI was installed on the outlet in the house where all this plugged in and I did indeed blow it on a couple of occasions!

The extra brace wires and ropes I consider to be almost mandatory on an installation like this. There were wires which came out of the walls just above the point where the diagonal braces attach to the vertical members. These went to dog stakes about 3 feet out from the walls. Cheap turnbuckles allowed me to keep the wires snug but not tight. I also used ropes which were attached around each of the square aluminum fittings which contain the rollers for the dome, and which went diagonally to a dog stake at the bottom of the wall, midway between the main verticals. Ropes were used to prevent wearing the dome skirt. All of this made the observatory very firm and sturdy.

Another thing I did was to drill the T-fittings where the curved tubes fit over them, and install a 10-32 screw through them. Let me assure you, the dome can come right off the T-fittings in a hard enough wind. The curved dome acts like a wing and generates lift. Before I installed these screws, I would often find after a storm that the dome had lifted up an inch on the fittings. I recommend this and the wires for any permanently installed AstroGazer. Sooner or later, you will get the storm you dreaded and then you will need this mod.

I moved the observatory to a country location in late 2010, and I am afraid the winds in the new area were too much for it. Because there was nothing to shield the building, it lasted only six months before being nearly destroyed in a storm. I do not consider this a knock against the observatory, however. The braces wires held but the observatory was simply shattered. The storm involved was evidently a small tornado, and I am not sure whether a "hard" observatory could have taken the winds any better. However, I would recommend that the best way to do a permanent installation of this observatory is with a hexagon of well-installed and reinforced six-foot privacy fence around it. I do intend to rebuild it this way when I get the chance.

The need to buy some parts gave me a chance to deal with Jeffrey Goldstein of Astrogizmos, and I would like to point out that he is a class-act, and he was just as helpful as he could be. I cannot say enough good things about him and his operation.

The Astrogazer is a wonderful observatory. When I used the observatory, I never felt that I was in a "big tent." The white interior makes for a beautiful setup with the red lights on at night. The dome and slit shields stray lights from outside, and makes the sky seem very dark. I used the observatory most every clear night for two years, and I never had any problems with it. Finally, this thing is so large that I was able to use two ten-inch scopes in it with little trouble, and with plenty of storage room. So long as some though is given to protecting the observatory from winds, I can recommend it very, very highly. --- GLEN WARD
Comments (0)