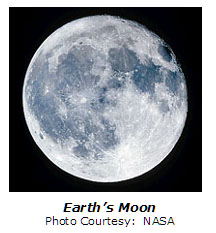 I have now spent the better part of the last four summers in Three Rivers, MI as the Camp Eberhart, Astronomer in Residence. Although I have written of my experiences many times, I’ve never elaborated on the finer details of observing sessions shared with campers. In this description it is my intent to detail only some of the objects viewed, the various equipment used for optimal viewing, and describe the reaction and feedback of campers during and following observing sessions.

Imagine a setting were you have your own 18” f/4.4 loaded Dob with tracking, all the best TeleVue eyepieces, and a fleet of 8" Dobs and other smaller scopes at your disposal. The big 18” scope has an ST 120; usually with a 22mm Nagler used as a finder/auxiliary scope. The viewing site is off the shores of Corey Lake. It sits on a peninsula that is reasonably dark, with a hint of a light dome emanating from the town of Three Rivers to the East. The naked eye limit at the site is about 6th magnitude. Water is in all directions except north and most of the sky is viewable without obstruction. Evening is turning to twilight and 12-20 campers between the ages of 8 and 15 have begun to arrive for the nights viewing experience. At the ready are the scopes, binoculars, and spotters. This is the scenario that I have faced numerous times over the last 4 summers and have loved every minute.

As the campers gather it is bright twilight, but if the moon is up, the scope will have it in focus. Or perhaps, if available, focus will be on Jupiter or Saturn. When viewing the moon, I typically start with the 13mm Ethos and include a Paracorr, which is always in the scope. Many campers who have never looked through a scope, as well as those who have, are shocked at the moons detailed features as revealed through this set-up. Some campers, being eager to repeat the experience, quickly claim a nearby scope and try to find the moon themselves. Sometimes they have trouble finding it or focusing properly. A few minutes of instruction on proper focus technique and a review of the practice session conducted earlier that day, and they quickly get the hang of telescope fundamentals. If the viewing conditions are particularly good, I often put a binoviewer in the big scope and the view becomes 3D-like. If there is a full moon, I will project the image onto a poster-board screen, which allows the group to experience the spectacle together. 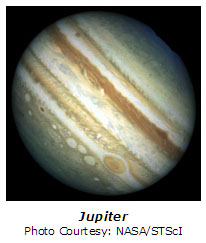 Jupiter and/or Saturn are always a big hit. When the viewing is good it’s not uncommon for campers to see the great red spot and many other features. On one occasion, when viewing was particularly good, a camper claimed to see detail on Ganymede. A treat I was also able to see and confirm. Last summer another camper was able to see the impact scar on Jupiter, which was formed by the collision of a comet hitting the surface of the planet just one day earlier. Saturn, of course, is always awe-inspiring no matter the condition of the viewing atmosphere. The rings never fail to bring about a strong reaction. 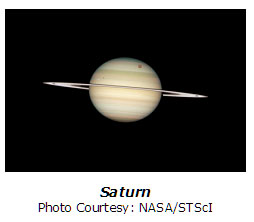 As darkness approaches, using a green laser pointer, I often continue with a whirlwind tour of the more prominent constellations and brighter stars. Beginning with the 380 light-years distant double star, Alberio, campers are often surprised to see such striking colors. When asked what could cause the color differences, they often respond with varied, but incorrect answers of different chemical compositions. Of course I am quick to tell them that the bluer star is simply hotter than the yellow/orange star. From Alberio, I typically focus on Alcor and Mizar, the beautiful triple star system in the handle of the Big Dipper. 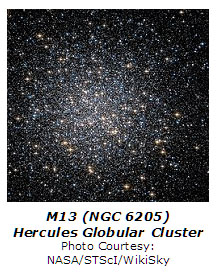 As the Milky Way begins to shine, I progress to pointing out deep-sky splendors. First up is M13 and its nearly 500,000 stars that reside about 26,000 light-years from Earth. If the view is clear, I often up the magnification with an 8mm Ethos eyepiece and wait for the inevitable reactions of awe and disbelief at seeing this magnificent cluster nearly fill the awesome 100-degree field of view. After encouraging them to guess how many stars they are seeing, the typical response is often in the thousands or millions. Later in the evening I show M5, which is another showpiece globular cluster. After viewing each, I often ask which of the 2 clusters they liked the most. While the favorite seems to be M13, M5 runs a close second claiming 40% of the votes. 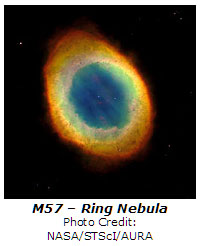 Moving on, my next focus is the planetary nebula M57 (Ring Nebula). For many, this is the first nebula or cloud they have seen through a telescope and its wonder never disappoints. Later in the evening, other planetary nebulas such as NGC 6543 (Cats-eye Nebula) with its unmistakable green color, always leaves a lasting impression on the aspiring young astronomers. Next up is NGC 6826 (Blinking Planetary) that shows a unique optical illusion in which the central star appears to blink in-and-out as the observer’s gaze goes back and forth between the object and the field surrounding it. This unique trick of the eye quickly takes first place to become the most memorable object viewed so far, and often becomes the topic of discussion the next day. Most of these planetaries are in the 2,000 to 7,000 light-year distance range. 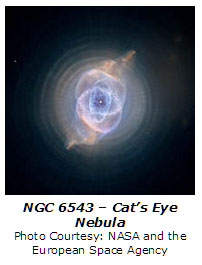 Heading into the Milky Way, my next stop is on the beautiful open cluster M11 (Wild Duck Cluster). This summertime favorite is a lush open cluster that, when framed in the 13 Ethos, campers often express amazement at the richness of the cluster’s star field. Often, while the view is fresh in their mind, I point out that they can see the silhouette of a duck looking off to the left, and most will nod in agreement having easily identified the silhouette. Ironically, this is not the reason for the nickname. Instead, I explain, the nickname is derived from the view of M11 through a low power, smaller scope that many viewers say make it look like a flock of wild ducks. 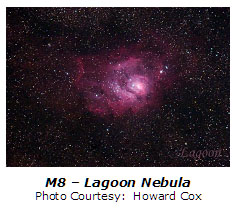 Turning the scope South, I often show the nebulas M8 (Lagoon Nebula) and M20 (Trifid Nebula). Both of these required an ultra-block filter for the best views. These clouds in space represent regions of star formation or stellar nurseries with well defined shapes that strongly resemble their pictures, which I keep available for comparison. While the filter is in place, I typically show the magnificent M17 (Omega Nebula), which has a very high surface brightness and well-defined shape. Campers often see the shape of a swan in this object. 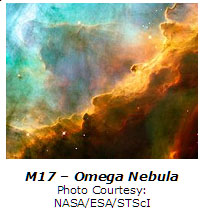 After astronomical twilight passes and I know it will not get any darker, I am able to go beyond the confines of our galaxy, deep into our universe. The first galaxy is often the magnificent M51 (Whirlpool Galaxy). As with many galaxies, M51 tends to be more challenging with its low surface brightness and often requires a bit more patience to view. Campers will usually, but not always, see the spiral arms of this celestial showpiece, which is relatively nearby at 24 million light-years distance. Actually seeing the spiral arms through a telescope is a most memorable experience and one that leaves many campers expressing sincere amazement.

M51 represents the classic face-on spiral, but I also make an effort to show its edge-on counterpart that lies 30 million light years away, NGC4565. The campers are able to glimpse the classic long, thin profile and its obvious dark dust lane. 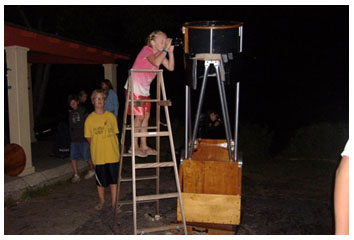 During the earlier part of the summer, I take advantage of the numerous springtime galaxy rich regions including the Virgo Cluster. Focusing on the region known as Markarian’s Chain, with the 31mm Nagler in place, campers are able to see as many as nine galaxies in one view including, M84 and M86.

The most distant objects I’d typically show would come later in the summer when Stephans Quintet would rise high enough to view. Stephans Quintet is a group of five faint galaxies squeezed into a small area. The brightest member is NGC 7320 and is actually a foreground galaxy that lies about 60-million light-years from Earth. The other four galaxies lie a more distant 275-million light-years from Earth. Since this is a very challenging object, I only show it on the best nights with no moonlight. Only a few campers have been able to see all five galaxies. This object is significant because, due to the foreground galaxy, it actually has two distances. The closer galaxy’s light left at approximately the time the dinosaurs died-off, and the other background galaxies’ light left at approximately the time the dinosaurs first emerged on Earth. Telescopes really are time machines! 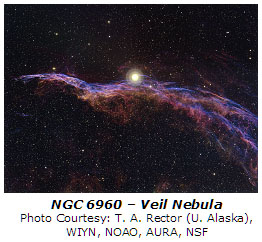 Moving over by a slight one or two eyepiece fields of view, is the showpiece galaxy NGC 7331 and its companions. I often refer to this as the Star Wars Galaxy stating that THIS is the “galaxy far, far away” where the movie takes place (They know I’m joking of course). I quickly explain my statement by noting the resemblance of NGC 7331 to the galaxy seen at the end of the Star Wars Episode V movie, referring them to the scene where Luke is getting his new hand.

If time permits, I try to fit in a view of the Veil Nebula. This huge but faint object is the remnant of a massive supernova explosion that occurred 20,000 years ago. The filamentary structure and large size that extends two to three fields of view can be an awesome sight; especially with a wide-angle, low power eyepiece and an OIII filter. 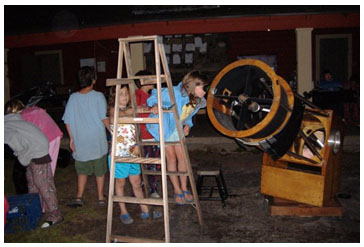 My last showpiece of the night is a sweep of the Milky Way with the 31mm Nagler eyepiece for those low power ultra-wide views. As a guide scope, I typically look through the smaller 4.7” refractor and slowly move through the Milky Way as the camper sees countless numbers of faint stars pass through the wide field of view in the big scope. Of all the sights experienced throughout the evening, this often proves to be the most memorable.

Nightly sessions often end with the group looking skyward and discussing the nights viewing. However, some night’s present special opportunities that require extended sessions. If I know in advance that an Iridium flare is to make an appearance, we patiently await the appearance of this spectacular blaze of light. As it does, a cheer and applause are indication enough that this site was well worth the wait.

Often, if the moonrise is moments away, I use the laser pointer to indicate a spot across the lake that is about one mile away, where the moon is due to make its first appearance of the evening. A competition often results to see which camper will identify the first glimmer of moonlight. Once the moon rises enough for all to see, we are able to literally see the Earth’s rotation as the moon’s size grows before our eyes. During the summer of 2009, we were able to see the motion of Comet Christensen amongst the stars as we periodically observed it throughout the night in real time. 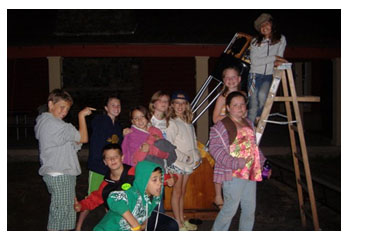 The impact this experience has on campers reveals itself with time as I often hear this was their favorite part of camp and I see their familiar faces return summer after summer. I feel blessed to be part of such an amazing experience and look forward to more like it.

For more info on my experiences at Camp Eberhart click