Galileo's Middle Finger and Other Rarities 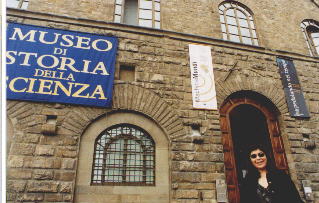 My wife Marianna and I recently returned from a whirlwind tour of Italy. We are still amazed and amused by the treasures we found in the little-publicized Museum of Science History in Florence . Some of the crown jewels of astronomical history are housed here along with an impressive collection of archaic scientific instruments dating from the 11th century onward.

In the museum we walked through room after room filled with artfully crafted scientific tools made of brass, hardwood and inlaid stone. The diversity of this collection ranges from a divider said to be used by Michaelangelo to an arabic celestial globe made in Valencia in the year 1080. A giant armillary sphere made by Antonio Santucci in 1593 and a lens grinding machine from the mid 1700's served as a worthy prelude to the entrance of the room which held the instruments of Galileo.

The center piece of this room is one lens of the famous doublet with which Galileo discovered the moons of Jupiter in 1609. This piece of glass, now ornately framed in ivory, along with two optical tubes he built created a wonderful window in time through which we could get a glimpse of the astronomer’s developing awareness of the universe. My wife and I were lulled into a wistful thoughtfulness for a few moments, until we spied the skeletal appendage on the upper shelf of the display case.

Some mischievous, visionary person had hacked off Galileo’s right middle finger before his entombment and mounted his phalanges erect and defiant under a small glass dome. This “fickle finger of fate” seemed to symbolize the essence of boldness and threat implied to church doctrine by Galileo’s publication of “Dialogue Concerning The Two Chief World Systems” in 1632. The irony of this symbol was not lost on us or on the museum guard, and we all shared a good chuckle.

We also enjoyed the current special exhibit on Ptolemy, Brahe,Copernicus and Galileo and their roles in geocentric versus heliocentric world view. Much emphasis was placed on early parallax measurements and how Galileo was the first observer to affix high quality angular measurement equipment to a telescope. This exhibit also showed the development of refracting telescopes of Galileo and Kepler and Newton's invention of the reflecting telescope, with mock-ups of all three instruments for comparison.

After seeing Michaelangelo’s statue of David and the incredible paintings and sculptures in the great galleries of Florence, this trip to the science museum really enhanced our understanding of the parallels of art and technology awakening during the renaissance. If you ever take a he trip to Italy, don’t miss the Museo di Storia della Scienza! (If you can’t, visit their website at http://www.imss.fi.it/. There are tons of pictures and interactive video to fill those cloudy nights.)