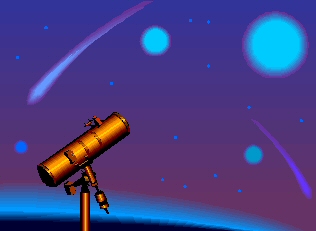 [ARTICLEIMGR="1"]We Stargazers...
Some of us are incurable romantics. We might like the attractive "line" of a refractor. We write in our observing journal with a fountain pen by candlelight. We have a special, delicate cup or very old mug from which we sip hot coffee or tea during the night. We find ourselves sitting on the lawn during pleasant early evenings, when the muted light makes the most haggard of yards look like the well-kept grounds of an estate, while nearby stands our telescope as a silent sentinel to the gates of the night.

We are moved by that scene in the movie Back To The Future III, in which an older gentleman and a young school teacher, his lover-to-be, sit in her moonlit backyard meadow. It is the late 1800's. She speaks of the crater Copernicus as he gazes through her sleek brass refractor. For us, romantic images such as these give the appellation of "backyard astronomer" such a nice sound.

We romantics hark back to the era when a woman or man with a personal telescope was able to walk at the cutting edge of natural philosophy, to do science, to be an astronomer. But, alas, for most stargazers the title of astronomer may no longer be quite accurate. We are still doing the stargazing thing, but perhaps for different reasons than those who did so in illo tempore, in that "golden age".

When I began stargazing some 25 years ago, the thought of being part of a real science appealed strongly to me. In those days Edmund Scientific could still advertise its' 8-inch reflectors as being large enough to serve as tools for scientific research. Such "large" telescopes made it possible for the amateur backyard astronomer to see objects on the cutting edge of astrophysics.

This is why I thought I wanted to be a stargazer. But today, my original motive is no longer valid. Although some limied research avenues remain open to the amateur whose telescope has a small aperature, the scientific utility of the backyard telescope is going the way of the slide rule. (I love slide rules. They too, are romantic.)

So why do we stargaze, if not for the purpose of scientific investigation?

I believe that in looking out at the stars we meet psychological and spiritual needs. As a child I entered into lengthy nocturnal vigils, not so much for the conscious purpose of becoming a famous scientist, but unconsciously to escape the chaotic environment of an alcoholic household and the emotional pain it entailed. For me stargazing was a very necessary escape.

Some of us stargazed as children and adolescents to address similar emotional or even spiritual needs. With our telescopes, maybe we tried to impress a certain girl or boy next door. Or perhaps we fantasized under the canopy of the night sky about our significance at home, on the Earth, in the universe.

As adults, we might continue stargazing to escape the grind of day-to-day lfe, to relive childhood experiences and "make them right", or even to experience a spiritual transformation -- as did Johannes Kepler or the consummate amateur astronomer, Rev. T.W. Webb. Sometimes, perhaps unaware, we seek to enter into a hypnotic trance or an altered psychic state. How many of us have gazed with the naked eye at a bright star until the lesser suns around it disappear, or have stared so long at the sky that it appears "textured" and undulating?

For the most part, there's nothing wrong with these motives. Stargazing has helped some of us survive some pretty awful times, especially when we were young. Even as adults, our need for fantasy and escape can still be a valid motivation if backyard astronomy helps us to relax and invigorate our weary minds and bodies.

But can the stargazing habit actually become detrimental? How do we know if we've crossed over the line from enjoying stargazing as a healthy outlet to using it as a sedative that gets in the way of living a full life?

In this regard the questions one would ask of a drug addict might also appy to the stargazer. Is this activity, as I practice it, interferring with important relationships? Is it hindering the development of other aspects of my personality? To maintain the activity, am I associating with persons I would otherwise avoid? Is it causing financial hardship? In supporting this activity, am I neglecting my moral and finanacial responsibility toward those who can't meet even basic physical needs?

To savor stargazing we need to strike a balance between the time, energy, and expense devoted to this activity and what we channel into other necessary human tasks. A contented evening of stargazing comes with this balance. In medio stat virtus, or, as this Latin rendition of Aristotle's maxim has been translated in to English, 'All things in moderation." If we do not heed these words, we risk being consumed by the act of consuming celestial light. Photons are visual food, and all human consumption has the neurochemical potential for creating chronic dependency.

Of course, most amateurs have no such problems with self-control. For most of us, stargazing remains a soothing balm and intellectual uplift -- even if it isn't cutting-edge science. It satisfies human needs. Sometimes, out of embarrassment, we might shroud these deeper yearnings with scientific talk. But we shouldn't need such "covers". If our romantic encounters with the stars reach us on some psychological, emotional, or spiritual level, so be it.


Appeared as a Focal Point article in the February 1993 issue of Sky and Telescope.