The Return of the Denkmeier 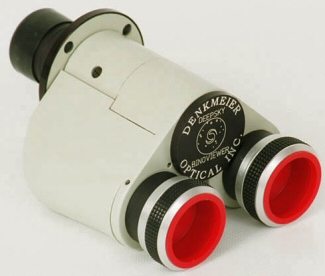 [ARTICLEIMGR="1"]As some of you may know, I had the opportunity to test the 2" Denkmeier Binoviewer some months back. I was suitably impressed, but due to the weather we were experiencing down here on the Gulf Coast at the time, my opportunities to use the Denk on a variety of objects were somewhat limited. Sure, Saturn looked great, the Moon looked wonderful, M42 looked fantastic, but that was just about the extent of it.

Recently, the good folk at Denkmeier Optical http://deepskybinoviewer.com/ asked if I'd like to borrow one of their demo units for some further testing. Since my initial experience with the Denk had been positive enough to make me something of a binoviewing convert, I couldn't help but say "yes."

By way of background, before I had the chance to test the 2" Denkmeier, I was not much of a fan of binoviewers in general. I had never had much success using them. I couldn't ever seem to completely merge images, and the resulting eyestrain and headaches meant I avoided them like the plague. You can read the full story in my review, How I Learned to Stop Worrying and Love Binoviewers, available here in PDF format: http://skywatch.brainiac.com/sw030403.pdf, but to make a long story short, I found it easy to merge images with the Denkmeier, and the entire viewing experience was comfortable and rewarding.

In fact, the only criticism I had of the Denkmeier was the friction-fit eyepiece holders. None of my eyepieces ever dropped to the ground, and they would stay put when I slid them in and out for diopter adjustments, but they weren't as secure as they could have been. I also thought the O-ring arrangement that applied tension to the eyepiece holders detracted from the appearance and overall build-quality of an otherwise outstanding piece of gear. I had been told that in the interim that both the "Premium" Denkmeier II (2") and Standard Denkmeier had gone to twist-to-lock self-centering eyepiece holders, and I was anxious to see how these worked.

In due course the "new" Denk arrived here at Chaos Manor South. The binoviewer in question, a 1.25" unit, was, like the previous binoviewer, equipped with a black plastic case of sporting goods heritage that provides adequate protection for the unit and its accessories. What I received this time was basically Denkmeier's "Standard SCT" package. In addition to the binoviewer itself, also included were the 2" Starsweeper f/5 reducer, a 2x "multiplier" lens and requisite adapters. The eyepiece holders, as I had suspected, were a major improvement. Smoothly threaded, they held the eyepieces securely and were easy to use and attractive.

On to the Chiefland Star Party. For those of you who've never attended this event, you should, the skies are D-A-R-K and the temperatures nice and warm (this year, anyway). The trip to this star party is a reasonably easy one for me, about 6 hours from Mobile to Chiefland, which is roughly 65 miles North of Gainesville in the Florida interior. I had done some limited viewing with the new Denk at the Deep South Regional Star Gaze in October, but the fact that I only had one good night meant that I used the Denk less than I probably should have.

At any rate, my astro-buddy, Pat Rochford, and I hit Chiefland just right. It looked like we'd be favored with two excellent nights, and we were. I spent the first evening working my observing list and using the StarSweeper for single eyepiece viewing. As I reported in my earlier review of the Denkmeier, I'm impressed with this gadget with or without a binoviewer. It provided a decent-looking field edge with most eyepieces, and I really didn't miss the Celestron f/6.3 reducer/corrector. This is far better than the minimalist f/5 reducers we used in the bad old days. An advantage of the StarSweeper, which, unlike the Celestron reducer, threads onto a 2 inch star diagonal, was that it allowed me to use the big back of my C11 via an EyeOpener, something you can't do easily if you use a Meade/Celestron r/c.

I did break out the Denk for Saturn on this first night (Friday), and, once the planet had risen to about 40 degrees of altitude, it was amazing. Using two TeleVue 8mm Plossls, I was just blown away. The color variation across the ring system, from the dusky reddish of the Crepe Ring, to dirty yellows and snowy whites, was amazing. The disk itself was highly detailed, with the banding beginning to take-on the detail you see in Jupiter's belts rather than the usual pastel smudges you can make-out on Saturn. I didn't trust intuition, but switched back and forth between binoviewer and single eyepiece to check myself. Yes, as I don't think many folks will dispute, you CAN see more with a binoviewer, with THIS binoviewer, anyway, on the planets than with a single eyepiece, no matter how good that single eyepiece (Naglers and Panoptics in my case).

Enough single eyepiece deep sky viewing! I declared Saturday night at Chiefland to be a "binoviewing night," and my scope a "single-eyepiece-free zone!" One thing I should mention is that using the 1.25" version of the Denk was not a huge hassle. Yes, the II is nice and has some advantages beyond a 2" barrel, including superior coatings and tighter optical tolerances. However, when it comes to using the "Standard" in a 2" diagonal with 2" accessories, I found that attaching a good 1.25"/2" adapter, my compression-ring-equipped Intes, worked very well indeed. The Intes, like most 2" adapters these days, is threaded for 2" accessories, so with it firmly in place, I stopped missing the Denkmeier II's 2" barrel fairly quickly. Please note that when I talk about the “2 inch” Denkmeier, I’m referring to the barrel. The Denkmeier II, like the Standard, uses only 1.25” eyepieces. Also, the adapters included in the Standard SCT package will allow you to use the 2” StarSweeper or insert the Standard into a 2” diagonal. I chose to use my Intes 1.25” – 2” adapter because it simplified comparing views between the binoviewer and a single 1.25” eyepiece.

I suppose the most memorable view I had on this evening was NOT M42, though I did take a look at it once it cleared the horizon (duh!). No, the hit was M33. With a pair of 25mm TV Plossls in the Denk and the StarSweeper screwed-on, it was perfectly framed. Big enough to show plenty of detail, but enough dark field around it to provide good contrast. The first thing I noticed was how easy the spiral structure was. Sure, I've looked at many photos of this amazing object (and taken a few myself) over the years, but I wasn't being fooled into thinking I saw something I didn't. The Pinwheel shape was prominent. Now, this was a good night, a very good night, so to evaluate the job the Denk was doing, I switched to a 22 Panoptic, a single eyepiece, and, yes, the spiral structure was less evident. Back to the Denk. This galaxy's huge HII regions were picked off one after another, but the treat was the tiny nucleus of M33 twinkling in and out.

Of course there's always the question of brightness when using a binoviewer on the deep sky. There is no doubt that a binoviewer and its beamsplitter decrease the amount of light reaching each eyepiece. How obvious and serious is this? With the Denk it was really not a handicap. Yes, when you go back to single-eyepiece-viewing you can detect an increase in image brightness. But not as much as you might have expected. I don't know whether this is due to the Denk's construction, the fact that things are easier to view with both eyes, or, probably, both of these factors. Anyway, the increase in detail that I noted with the binoviewer was well worth the small brightness penalty.

Did this decrease in brightness make some objects "out of bounds" for the Denkmeier? No. Not for me, anyway. If you're a real galaxy fanatic, things may be different for you, but I found that any galaxy I wanted to view was in range of the Denkmeier. I took particular care to check this, and looked at a variety of smaller galaxies in the 11.5 – 12 magnitude range. All were as visible in the binoviewer as with a single eyepiece. Dimmer than 12? I certainly don't push too much dimmer with a C11 (hey, I'm really a Lunar/Planetary guy these days!), and I suspect that most committed galaxy hunters are using scopes in the 20 inch aperture range. Meaning there's more light available for the binoviewer.

The thing was, I had just as much fun with the Denkmeier on the deep sky as I'd had with it on the Solar System. And you can sure "wow" people with it. Being a recent convert to the binoviewing "religion," naturally I wanted to proselytize, but I didn't have to. The fact that I had the only Denkmeier on the field (as far as I knew/know) meant I had a stream of visitors wanting to check it out. Maybe initially on Saturn, but one look at M42 peppered with "3D stars" and I had plenty of converts.

There were, by the way, several other brands of binoviewers on the field, so I had the opportunity to compare their performance to that of the Standard Denkmeier, if not in side-by-side fashion. My opinion? For ME the Denkmeier worked better and was more comfortable to use. I do understand that "comfort" when using binoviewers is a subjective thing, and that what suits one person might not suit another, but I can only report what I experienced, after all.

Did I say M33 was my fave? Actually, my most memorable observation at Chiefland was not M33. Oh, that was great, but the greatest thing was the Denkmeier showing me the "Running Man" Nebula, that complex of reflection nebulosity in Orion’s sword including NGC 1973-5-7. In the past, I'd never been sure I'd seen it. It's like the reflection nebula in the Pleiades; it's very easy to ascribe what you see to scattered light. But the Denk pulled-out the real deal. Not just around those bright stars, but fanning off into space, showing surprising size and detail.

What a night! Wish you'd been there!