Humanity: A Story With Alternative Futures 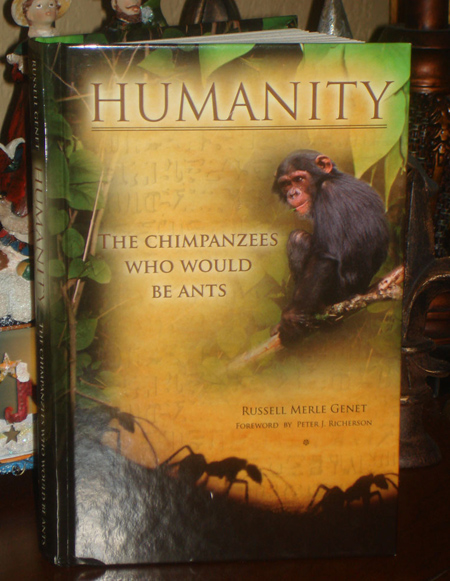 In the days when a book about a dog (Marley and Me, by John Grogan, Harper Collins 2006) has been at or near the top of nonfiction best-seller lists for nearly a year, one wonders if writing and thinking have literally gone to the dogs. In his sixth published book, Humanity: The Chimpanzees Who Would Be Ants, Russell M. Genet (PhD) takes readers on an integrated journey through the physical and social sciences that will surely leave a trail of satisfied readers.

This book is written by someone who is first and foremost, an astronomer and is a great escape for those of us unable to get behind an eyepiece during frozen or clouded times. Genet excuses himself up front for being a scientist and indeed his bona fides include 51st President of the Astronomical Society of the Pacific, astronomy professor, researcher, and co-creator of the world’s first fully robotic telescope (Fairborn Observatory, 1983). Despite his mea culpa, Genet demonstrates a keen ability to synthesize across multiple, diverse disciplines. Readers of this book will come away with a new or renewed understanding of cosmology, geology, sociology, economics, and psychology.

Despite its scientific underpinnings, the most difficult part of this book to understand is the title. In the first two parts of the book, Genet explains stellar through biotic evolution from quarks to superorganisms to provide readers an appropriate and engaging context from which to consider part III. Genet’s story roughly follows ants, chimpanzees, hominids, and machines in an evolutionary escapade.

He masterfully weaves the theme of ant colonization as a metaphor of the human species. Although a human-ant metaphor may seem arcane, the author builds a solid scientific case for his thesis of cultural evolution. Tying together his story of Humanity, Genet provides the reader with four alternative futures for our species. The alternative futures are all quite different and Genet compels the now informed reader to consider each scenario based on their personal view of our species.

One of the most compelling cases of the human-ant metaphor surrounds war making. According to Genet, ants have been waging war against not only other ants, but also other opposing species for some 100,000 years. Genet points to the sophistication of the ants’ chemical warfare capabilities by noting the ultimate suicide bomber, a genetically evolved ant who’s poison gland fills its abdomen until it detonates in the midst of its adversaries. Fortunately, mankind has not yet “evolved” to this state of warfare.

Genet points out that our ancestral hunter-gatherers nearly extinguished themselves by feeding off the high end of the food chain after the ice age. Ultimately, our species took hold after mastering the same agrarian skills used by fungus gardening ant farmers 25 million years earlier. After mastering our food supply, mankind-developed machines, technology, and self-awareness began to expand and the population genie was literally released from the bottle as human biomass began its seemingly unending march on planet Earth.
Humanity is a great book, written by an astronomer in the theme of Big History, that sees from the Big Bang to modernity and proposes alternative futures. Dr. Genet’s multi-disciplinary approach synthesizes biology, astronomy, archeology, and sociology to provide a readable, coherent view of humanity’s past, present, and future. Buy it now for your favorite frozen or frustrated astronomer.