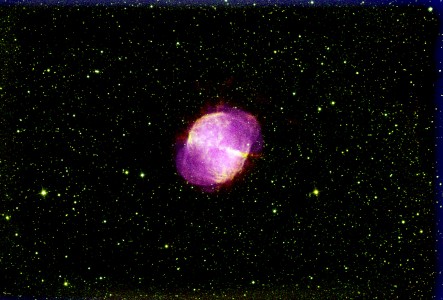 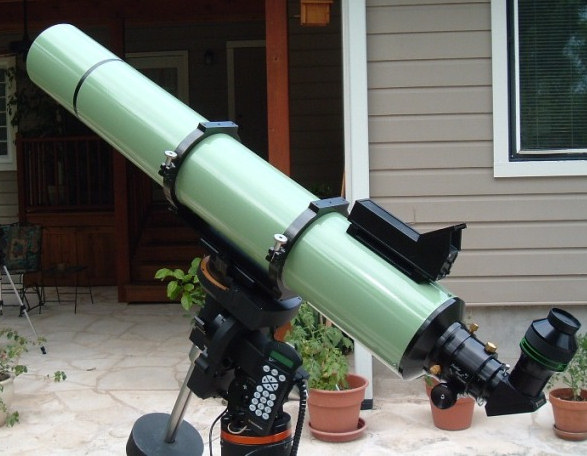 Buffy, my 25 year old Mistress (a 6” f/8 AP refractor) has proven to be hard to ignore. She tempts me constantly with her ultra-fine extreme off axis performance and diamond-sharp on axis sharpness.

When I aquired Buffy, I had no intention of ever spending much more money on the scope. The tube had been repainted somewhere along her journey through the cosmos, and while it was rough, a great deal of buffing made it passable.

The focuser likewise was serviceable, but lacked that “Little Black Dress” sophistication.

Buffy has turned out to be such a thrilling telescope though, and I found the scope to be getting as much use as my C14. In fact, I had to FORCE myself to choose one or the other for a night of observing, or I would constantly be jumping around between the two scopes.

I paid a lot of money for Buffy, considering the OTA was about 23 or 24 years old when I bought it. Spending more money on it simply didn’t seem to make sense.

With each usage though, my opinion began to change. The old 6” AP is SUCH a wonderful telescope to view through. The on axis performance would be called “Semi-APO” by today’s standards I suppose (though the amount of color is VERY low, it does not correct violet particularly well. No, the magic of this scope was NOT in its On-Axis performance, thought it is clearly the best 6” telescope I have ever used.


Buffy, ready for the ball in Rebar Green with Emerald metalflake

The REAL magic wroght by Mr. Christen was in the area of off axis performance. I don’t know how he did it, but Buffy has so little off-axis aberration and such a flat field, that even with the WIDEST of wide field eyepieces, stars at the edge of the field remains literal pinpoints. Seeing the edge of a 2 degree field in a 31mm Nagler is a truly spectacular experience.

Ah, but this is when a good focuser is MOST appreciated. The old Byers that was fitted to the scope just didn’t have the smooth, positive motion that I was looking for, and since the 31mm Nagler spends so much time in this scope, it became apparent that investing in a new focuser would indeed be a good thing.

Now I generally advise people NOT to spend lavishly on focusers because so many people turn around and sell the scope later that they don’t get much of their money back. I have no intentions of selling the AP anytime soon though, so for me, it made more sense.

I considered offerings from both Moonlight Telescopes Accessories and from Starlight Instruments.

I am on record as saying that I could not understand why most mass market manufactures would stick with Rack and Pinion when it probably doesn’t cost more to make a good Crayford focuser. That doesn’t mean that I like Crayfords better though.. Quite the contrary. I PREFER a good rack and pinion focuser, but making a good rack and pinion focuser is I think much harder than making a decent Crayford.

I put a Moonlight on my Vixen 140 before I traded it for a mount for Buffy, and overall, I did like that focuser. It was a HUGE improvement over the worn out factory rack and pinion unit. Still, I didn’t LOVE it. My concern with the Crayford was that I seemed to have to play with the tension quite a bit. I have noticed this with other Crayfords. My experience has been that if you do change from heavy eyepieces like the 31mm Nagler to light eyepieces like a 5mm Nagler, it is sometimes necessary to tweak the tension screw a bit. Not much really, but just a little bit.

By comparison, the best Rack and Pinion focusers seem to be more forgiving, allowing you to change from very heavy eyepieces to very light ones with little adjustment being required in most cases.

So, while I think that Crayfords are a huge improvement over cheap rack and pinion focusers, I believe that for now, the BEST focuser design remains the time-tested Rack and Pinion made to extremely high standards. That is not to say that it is a fair comparison because the best quality Rack and Pinion focusers are EXPENSIVE. So it goes.

And for that, there is only one game in town, and that is Starlight Instruments. 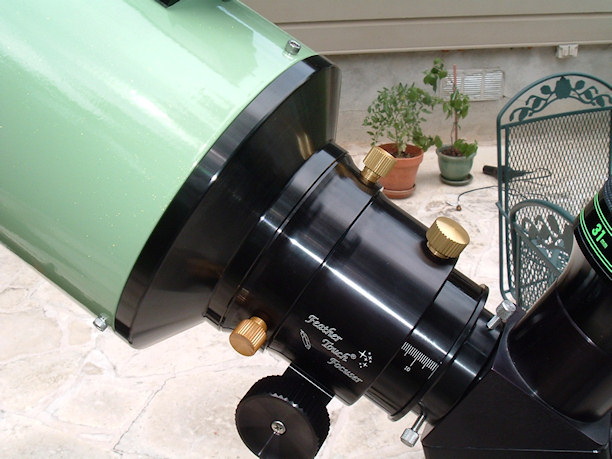 I had the added complication that neither Moonlight or Starlight carried an adapter. My 6” AP uses a 7” O.D. Aluminum tube for the OTA, and neither company really carried anything that would allow me to adapt the focuser.

I called Starlight to look at my options. The first option was to use the Byers mounting plate and open up the hole, then thread it so that the Feathertouch focuser would simply screw in.

Well, along the way of putting on a new focuser, I also decided that I would strip the tube and repaint it, and rather than going back to the simple flat back plate, that it might be nicer to have a new adapter made to update this scope for use in the 21st Century.

The people at Starlight Instruments were very patient. I sent them my old Byers, and they took measurements and provided two different adapter options. The one I selected had a shallow tapered cone shape that I thought was more in character with the telescope.

The people at Starlight then charged me an EXTREMELY reasonable charge of $85 to render the drawings and convert the measurements into their CNC machine for cutting of the part. The adapter itself was manufactured for about $175, bringing the total cost for the adapter to about $260. This is JUST for the adapter.

Was it worth it? OH, yes. I believe so. The new focuser looks beautifully integrated into the telescope, and the anodizing perfectly matches the focuser, which would not have been the case with the old Byers back.

The Feathertouch has three radial screws which allow for the rotation of the entire focuser. This ensures that the focus knobs always stay in the same orientation to the observer’s hands.

The movement is wonderfully light, smooth, and precise. With Crayfords, I found that when you had the tension set high enough to hold a 31mm Nagler while the scope was pointed at zenith, the torque on the outer knob resulted in a slight “Rubbery” feeling when focusing. Even on the center knob with its geared reduction, I could feel this on the Crayford focuser. The Feathertouch by comparison seems to be a bit more positive even with my heaviest eyepieces (41mm Pan, 31mm Nagler, all of the T4s).

The internal break makes much of this possible, and it was again an important factor in my purchase decision.

Overall, this is without doubt the most pleasurable to use focuser I have ever owned. I could have been happy I think with a good quality Crayford, but I don’t think I would have been QUITE as happy as with the Feathertouch. The movement is smooth and the grip is positive. Since getting the initial tension set to my preference, I have not had to TOUCH it again, and that is what I like in my equipment. The less I have to touch anything during a session the more I can study my target.

I did not like the Gold Anodized knobs on the original focuser. I called Starlight and they even agreed to swap them out for some knobs that were anodized in black (NOT shown in the picture).

The focuser is BEAUTIFUL. I had Buffy’s tube powder coated in a Rebar Green color, with a clear Emerald Green metal-flake overcoat. The black anodized adapter and focuser body are a beautiful match to the painted black ring that is the edge of the objective cell.

All of this was not inexpensive. It was worth it to me personally only because I am so thrilled with the telescope itself that I plan on keeping it for a very, very long time. I am convinced that the Feathertouch was the right focuser for me, and this review is something of a “Thank you” to the people at Starlight Instruments for working with me on the adapter so that I could bring this old telescope gracefully into the 21st Century.

I believe that the Feathertouch represents the pinnacle of Rack and Pinion focuser engineering and design, and highly recommend the product and the company behind it.