What Do You See When You See Seeing? 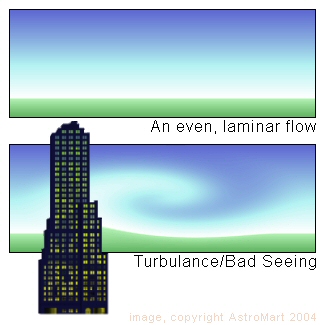 [ARTICLEIMGL="1"]If you have ever been to a star party, you have certainly heard talk about “the seeing,” as in, can you believe the seeing in the Florida Keys? At most star parties you are more likely to hear about the *^%+&# seeing tonight. In both cases there is much emotion invested in something we have little control over: the atmospheric interference that limits a telescope’s ability to form crisp, high contrast, well-focused images.

So what is an astronomer to do? The first step is to understand your enemy. To that end, I have a very simple explanation of how a telescope sees a star without the atmosphere. We can then look at how the atmosphere changes that explanation. Next we can think about how to model what the atmosphere has done to your telescopic image. Then we will be ready to see what the models tell us about the mythical seeing cells, and the dark sky legend that a small telescope outperforms a large telescope in poor seeing.

Dream of having your telescope above the atmosphere pointed directly at Vega, a point source 25 light years away from us that radiates outward in all directions. The radiation from Vega is a bubble expanding outward at the speed of light. By the time that bubble reaches you, the total surface is so large, that the portion of it that enters your telescope has no curvature anymore; it is a plane. Since the telescope is pointed directly at Vega, this plane wavefront is perpendicular to the optical axis, and the star is brought to focus on the optical axis. If the telescope were pointed slightly away from Vega, the wavefront would still be a plane, but it would be tilted slightly relative to the optical axis, and the star would be brought to focus slightly off the optical axis. With a perfect telescope, we get a diffraction-limited image of Vega, because the wavefront entering the telescope is a perfect plane. Remember, we are dreaming! By the way, the only part of this scenario that is not completely fanciful is the perfect plane wavefront. Above the atmosphere the wavefront arriving from Vega is perfect.

Now let’s return to earth and try pointing our telescope at Vega through the atmosphere. We can still dream that the telescope is perfect, but once that wavefront travels through the atmosphere it is not going to be a perfect plane anymore. At the speed of light, the wavefront is going to go through the atmosphere before anything very interesting can happen to the air it is going through. However, in that instant, different parts of the atmosphere will be at different temperatures and densities, which will change the refractive index a little, which will change the speed of light a little. So some parts of the wavefront are going to arrive early and some parts are going to arrive late. It really is a shame that after traveling all those light years and becoming such a perfect plane, our wavefront gets ruined in the last few miles. It is no longer a smooth, crisp, flat plane. Some parts of it are above and some parts of it are below where they should be. Entire areas of the wavefront may be bowed up or down.

So how do we describe the image formed by our poor atmospherically distorted wavefront? In the simplest model, we pick the plane that on average does the best job of fitting all the distorted points in the wavefront. Unfortunately, when we find the best fitting plane it is unlikely to be perfectly perpendicular to the optical axis anymore. Thus, in this model, the atmosphere shifts the image of Vega slightly off the optical axis.

In another, more complex model, we divide the distorted wavefront into a grid of some sort, as if we were laying ceiling tiles. Now we find the plane that does the best job of fitting the distorted points in each portion of the grid. We end up with a ceiling where the tiles are tilted slightly with respect to one another. A few may be perpendicular to the optical axis, but many are not. Each of these tiles (sub-apertures) forms an image, and the images are distributed around the optical axis according to how the tiles are tilted. In this model, the atmosphere spreads the image of Vega into a number of less bright images slightly off the optical axis.

Up until now, we have been thinking about one wavefront passing through the atmosphere at one instant. In reality, the atmosphere is changing with time, and the wavefront distortion will be changing with time, so we should expect to see dynamics in both models. When the simplest model is correct, we see a single image of Vega dancing around the optical axis. When the more complex model is needed, we see a more complex dance between multiple images of Vega bumping past and into each other in the vicinity of the optical axis. We usually describe the seeing in terms of average parameters since they vary from moment to moment.

From experiments on the atmosphere with telescopes of different sizes, scientists have found that in general you can get good modeling using tiles averaging 2-12 inches across, with 5 inches being typical. To my way of thinking this is the basis for the mythical seeing cell. The average tilt ranges between .25 arc-second and ten arc-seconds, with 1-2 arc-seconds being typical. The average time scales for changing tilt vary between .05 seconds and a few seconds, with .1 seconds being typical. Most amateur astronomers talk about the “size” and “speed” of the seeing. The size is related to the how far the tiles are tilting and the speed is related to how quickly the tilt changes. Amateur heaven is sub-arcsecond slow seeing. Amateur hell is baseball sized (5 arc-seconds) fast seeing.

So what do these models and measurements tell us about the effect of the mythical seeing cells on different telescopes? If your telescope is very big (>>12 inches), it is very unlikely that one very big tile is going to give you a good fit to your distorted wavefront. In fact, the bigger the telescope, the more tiles you are likely to need to get a good fit. This is true, even if you put your telescope at Mauna Kea where the seeing is generally very good, and the altitude puts you above most of the atmosphere. If your telescope is very small (<2 inches), a single tile will probably give you a pretty good fit, even down in the muck at sea level.

Here then is the basis for the idea that in poor seeing a small telescope can do better than a large telescope. If the seeing is well modeled by a single tile, you will see a single image moving around. Your eye can follow the motion and you will correlate up as much detail as the small telescope can produce. With a larger telescope, the seeing requires multiple tilting and tipping tiles (say that quickly three times). You will see an image that is smeared into multiple dancing or boiling images. Your eye cannot simultaneously follow all the images and you won’t correlate up as much detail as you could in the smaller telescope. Is it possible? Is it true?

Comparing the views through my 3-inch refractor and 10-inch reflector side by side on a night of poor seeing leads me to a definitive answer -- sort of. There were moments in which the 3 incher showed a clean split of a double star that was a smeared out mess in the 10-inch telescope. So it is possible momentarily for a smaller scope to outperform a larger scope when the seeing is poor enough. The problem is that the seeing varies from moment to moment even on a bad night. In those moments when the seeing gets better, the larger telescope can and will show more detail. In my experience, the only reason to prefer the smaller telescope is for portability or wider field of view. This is true, even when the seeing is poor. So the seeing cell is real, but it is a statistical reality, like that American family with 2.2 children. And the legend of the smaller telescope that does better than the larger telescope has some basis in theory, but the dynamic reality is that even on a night of bad seeing, a larger telescope will show you more.

Now that you don’t having to worry about the seeing cells and you don’t have to stop down your large telescope, what can you do to find better seeing? First, most seeing is local. While weather influences seeing significantly, some sites have consistently better or worse seeing. Even moving a few hundred yards, or moving up a few tens of feet can make a difference. Often the seeing that most disturbs telescopes is very close to the ground. Remember this mantra: laminar good, turbulent bad. Structures, trees, and mountains disturb the laminar flow of air close to the ground. If you go up in altitude onto a ridge, you want to be on the leading edge with a laminar flow (wind) blowing into you rather than on the trailing edge where the air will be more turbulent. A second local problem is the air within the telescope itself. Medium to large reflectors and catadioptric telescopes with significant thermal mass can have difficulty reaching thermal equilibrium and/or tracking temperature changes during the night. Finally, if all else fails, you can move to the Florida Keys where the temperature doesn’t vary so much, and sub arc-second seeing is common.