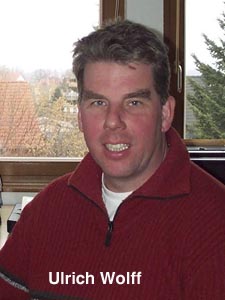 My name is Ulrich Wolff. I am a 42 year old land surveyor. I live in Germany, close to Berlin.
I have been interested in astronomy all my life, but the only telescope I have is just a 4-inch refractor. It has been about a year ago that I learned about Rent-a-scope, then situated at the Sonoran Skies observatory, MPC Code G94. I started to use it for asteroid work. I was astonished about the deep limiting magnitudes that could be reached.

I learned to use the astrometry software Astrometrica http://www.astrometrica.at/ and began to submit observations to the MPC http://cfa-www.harvard.edu/iau/mpc.html . The results have been very promising.

After Rent-a-scope had moved to New Mexico Skies Observatory http://www.nmskies.com/index.html I continued to do minor planet observations from there. On September, 25th 2003 we got good news from the MPC: “Your site is now code H06.“

On February 11th 2004 the Lowell Observatory did more than 12,000 detections of moving objects. They are the only one of the big surveys that published their observations http://asteroid.lowell.edu/asteroid/loneos/public_obs.html . I took those detections and filtered out everything that was close to a known asteroid, fainter than 18.5 and brighter than 18.0 mag. There where still 8 candidates left. One of them was an object that LONEOS called 042110JY. I thought it might be interesting to do some follow up.

On Sunday, February 15th, before having breakfast, I sat at my computer and connected to Rent-a-scope. 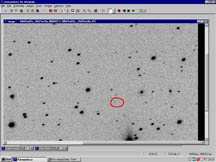 The Mewlon, that I usually use, was occupied, so I took the TRC. I did three exposures of 5 minutes each of a point I had calculated with the New Object Ephemeris Generator http://cfa-www.harvard.edu/iau/MPEph/NewObjEphems.html

In the evening I analyzed the images. The automatic moving object detection found nothing, just another known object. I took a closer look and inspected the images visually. And: There it was, with a quite bad signal to noise ratio, but with exactly the right velocity and direction moving between the stars. Unfortunately I had forgotten to use 2*2 binning on the TRC, what would have resulted in a better signal to noise ratio.

The next day I was able to use the Mewlon and was successful again. I sent my results to the MPC, together with the measurements of a lot of other asteroids that had been on my images.

A couple of days later I used the Minor Planet Ephemeris Service http://cfa-www.harvard.edu/iau/MPEph/MPEph.html to check my results. By then the object had the designation 2004 CU50. I was surprised and pleased to see a discovery asterisk besides the observatory code H06! The MPC had linked my observations to a few survey observations by LONEOS and LINEAR, but apparently I was the first one who provided more than unlinked one night stands.

On Friday, the 20th I did another follow up, because I didn’t want the object to get lost in space. Again I sent it in and checked the Ephemeris Service later. But what a surprise: The MPC had now found even more survey observations all the way back to February 2000. And the discovery asterisk was gone! I concluded, that I had lost the discovery credit to LINEAR, who did the first observations of the object in 2000.
A short note about that appeared in the The Asteroid/Comet Connection's daily news journal http://www.hohmanntransfer.com/news.htm . Some amateurs immediatly put me right and told me, that I still got the discovery credit. 2004 CU50 just had been linked to 2000 DX92, but remained the principal designation.
Even more, the German amateur Sebastian Hoenig http://www.rzuser.uni-heidelberg.de/~shoenig/ was able to do precovery on NEAT images and found 12 more positions from the 2002 opposition.

So now, just 2 weeks after discovery, we already have 62 observations at 3 oppositions, 2000-2004. A great success, made possible by well maintained equipment in a dark place, the internet and international cooperation. And, I‘m sure, there’s more to come!