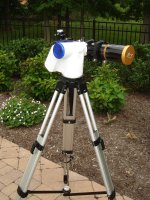 The Vixen Skypod is an Alt/Az “GoTo” mount that will also tract an object as it moves across the sky. It retails for about $900. I purchased it for slightly less from the wonderful folks at Anacortes Telescope, which was enough to cover the shipping cost. What prompted the decision to buy the Skypod, was my desire for a tracking Alt/Az mount to mate with a William Optics Zenithstar 80 FD I had purchased as a travel scope.

First impression of the Vixen Skypod is that it’s larger than I imagined. Photos, and there weren’t many at the time of purchase, gave the impression of a rather square looking box with a round base. In fact, the box has a 5” tubular base protruding from the back, which increases the size significantly. Of course, the upside to this is stability. The Skypod is 8” wide, 8.25” high, and 7.5” deep at the base. The face sits at about a 60° angle for viewing and programming ease, but it’s usually more comfortable to remove the detachable programming keypad and move it closer to my eyes rather than moving my head towards the keypad. 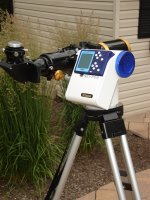 Let’s get my big gripe out of the way. How many of us use AA batteries as a power source? Very few!! Well, that’s what you’re expected to use right out of the box. The Skypod has a 12v dc adapter plug on the front……… but is the 12v cord included with the unit? NO, it has to be purchased separately. $20 includes shipping, if memory serves me right.

A minor issue is the “do not aim at the sun” warning screen that appears every time the unit is turned on. In addition to this annoying reoccurring message, rather than having the default setting at “confirm”, it’s set at “not confirmed.” The result is that you have to select “confirm” and press OK. It’s amazing how I have to be saved from doing something ridiculous every time the Skypod is turned on…….…at night. It has an internal clock; it should know if the Sun is out. 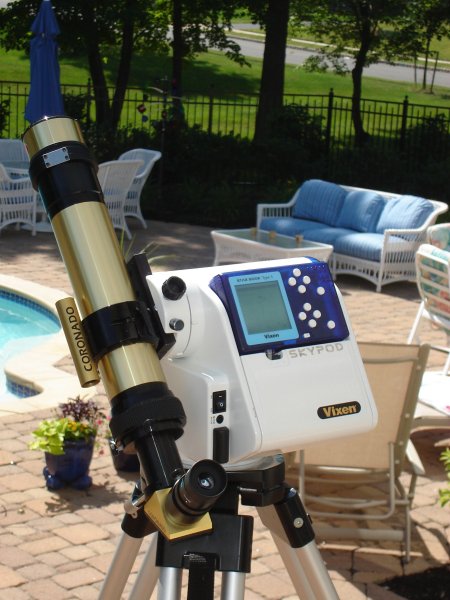 Coronado MaxScope 40 on the Skypod - Following directions was not one of the finer qualities reported by my teachers.

Since I had a sturdy aluminum tripod from another mount I owned, there was no need to purchase the Vixen tripod. As it turned out, to mount the Skypod properly, I had to create an adapter plate from a ¼” plastic cutting board, cutting and shaping it like a donut.

So let’s summarize. I’ve had to pay $20 extra for the 12v dc cord, insulted every time I turn on the unit, and I’ve had to work harder than I expected to get the Skypod mounted on the tripod. This thing better perform as advertised.

The directions for setting up the programming aspect – language, time, date, and location, are well described. A nice touch is the save feature and a running clock which makes the Skypod ready to go for the next viewing session without inputting all the data again.

The directions inform the user to turn on the hand controller before turning on the mount. Don’t take the time to read any other directions because if the mount isn’t turned on before the hand controller beeps the mount won’t work. This caused about 20 minutes worth of unneccessary connection and procedure checking (and some colorful language). Having overcome that issue, the user will know the mount is working by the sound it makes: bzzz, bzzz, bzzz, bzzz…………………all the time. It’s not enough to get a person institutionalized or even to develop a nervous tick, but it’s there. bzzz, bzzz, bzzz.

Moving the scope on its axes is not as noisy as I expected, but I have come to the conclusion that this scope is not for terrestrial viewing. The scope moves very slowly and when the user removes the finger from the direction buttons at the fastest speed, the mount continues to move for about 2-3 seconds. The speed, by the way, is controlled by the sky view magnification on the display. The Skypod has no clutches that can be loosened to allow a user to quickly slew to a portion of sky. All movements must be done with the hand controller buttons. The Skypod will allow an observer to track without GoTo initialized, but as I have indicated, the observer must patiently slew to the object with the controller buttons. This procedure is not fast by any means. And let’s not forget bzzz, bzzz, bzzz.

I should mention, at this point, that the usable screen size is a 2.6 monochrome LCD display. The screen’s resolution improves as the magnification of the sky increases; otherwise all objects looked lumped together. A good idea is to center an area of sky in the low magnification setting and then find individual objects in the high magnification setting. Some of the display’s factory settings leave something to be desired. I found that adjusting the brightness (darkness) of the green screen allowed objects to be more easily seen and adjusting the settings to make outlines of the constellations made the sky more recognizable.

My 80mm Zenithstar FD with a Denk Powerswitch diagonal and 16mm Nagler t-5 weigh in at about 9 lbs. This is 2 lbs short of the maximum weight limit suggested by the owner’s manual. Changing the diagonal and adding a binoviewer would definitely bring it up to the maximum limit. The latter configuration’s weight is the most I would consider a safe bet. The owner’s manual recommends using a counterweight for any loads above 5-6 lbs, but that doesn’t appear to an issue with my tripod and scope combination. , I suspect, the counterweight would be more appropriate if the optional table stand is used.

As is the case with all GOTO systems, there is a learning curve. Learning Vixen’s Star Book-S would be easier if the owner’s manual didn’t get in the way. I found the manual slightly confusing. It tries to give to much information at once, mixing tips in with the logical programming sequence. An observer has to familiarize him/herself with the CHART and SCOPE modes and learn how to choose and center objects for the alignment process. Repetition is the key to making the process easy and quick, so I won’t bore anyone with the minute details. Suffice to say, that an easily recognizable star or object is chosen from the OBJECT menu on the CHART screen, the mount is ordered to find the star/object, and the star/object is centered in the telescope’s field of view and aligned. Follow this process a second time and the mount is properly aligned. After the alignment procedure is completed, objects of interest can be chosen from what appears on the CHART screen or from one of the several catalogs in the OBJECT screen. Only those objects above the horizon will be displayed for the current time and location. The manual indicates that there are 22,735 objects stored in memory. That ought to keep me busy for a couple of nights. Did I mention bzzz, bzzz, bzzz? 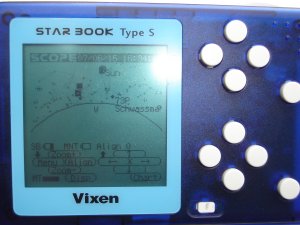 Picture indicates the Sun’s location on the day I chose to break the rules.


After a three star alignment (Mizar, Deneb, Arcturus) it was off to the races. Well almost, my first GoTo (M13) slewed the diagonal into the tripod. Straight up is not a good thing with this mount. The scope is not offset from the mount at a sufficient distance to prevent the focus knob from hitting the mount. When viewing straight up, I will have to remember to slightly rotate the focuser so that the focus knob clears the mount. One tip – pressing any button to cancel GoTo, came in quite handy. My second attempt almost put Jupiter in the center of the field of view. It was close enough. Next was M4, followed by M5, M6, Mizar, and finally M51. All were close to the center of the 16mm Nagler’s field of view. I had to imagine M51 was, since I can never see it in an 80mm scope from my location. The bottom line is that the Skypod’s GoTo was very accurate, even considering that I didn’t accurately fine tune objects in the field of view like the manual suggests. Evidently you don’t have to be highly accurate with alignment to get the Skypod to perform very well. I did take the time to do three more alignments on M4, 5,& 6, since it only required a few seconds to press ALIGN and CONFIRM. You can also pick a point in the sky on the Skypod’s screen and direct the Skypod’s GoTo that location.

Another interesting feature of the of Vixen’s Starbook is that it can be removed from the mount and used as a star chart. It has its own four AA battery source, allowing it to be disconnected from its cord and used anywhere as a reference tool.

I’m very satisfied with the performance of the Skypod and William Optics 80mm Zenithstar FD combo. I'm guessing that the maximum size scope, for this mount, would be in the 80 - 90 mm range. At one point the altitude clutch did slip with the focuser racked all the way out with a 16mm Nagler. A simple rebalancing resolved the issue. By the end of the evening, the Bzzz, bzzz, bzzz was hardly noticeable. All I need now is an exotic travel location……….the plan is Belize at the end of the year??