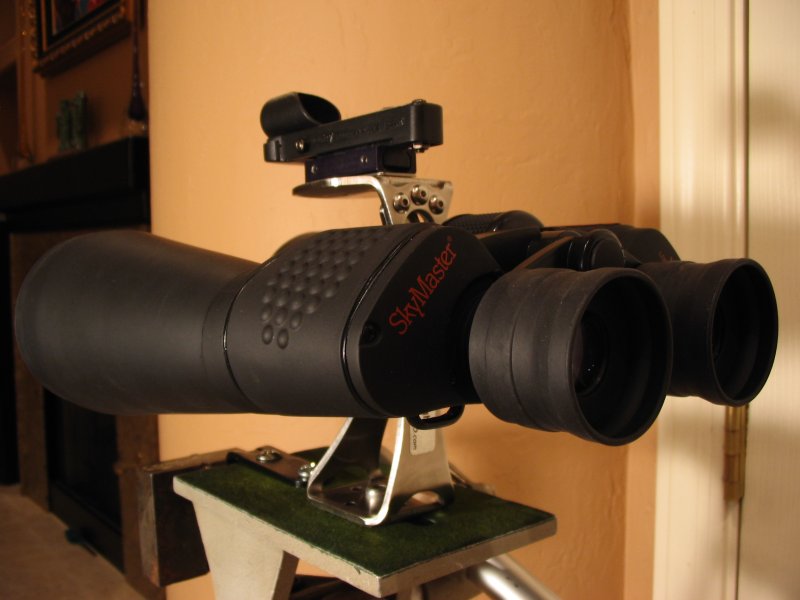 “Form Follows Function” can be expressed in utilitarian form – or as an art form.
The innovative FAR-Sight binocular mount from Farpoint Astronomical Research embodies both.

To dispense with the obligatory positioning statement, my sole association with Farpoint is that of a highly satisfied user of their elegant FAR-Sight solution. I am sufficiently enamored with this mount to write this review while remaining objective. That said, good is good.

I am a visual observer that has benefited from GoTo technology for several years now. Having said this; the “purist” in me began to bubble to the surface. In my younger years I would only use pool cues and baseball bats made of wood when fiberglass and aluminum were readily embraced replacement materials. I began to yearn to actually learn the sky, and what better way than to develop star-hopping skills.

My 9.25” NexStar GPS telescope hardly qualifies as a star-hopping tool; so I felt using binoculars would be the rational way to begin. I own a pair of Leupold 9x25 Gold Ring binoculars purchased years ago and quickly discovered they were not up to the task. The quest for a pair of astronomy binoculars began.

I quickly learned in detail about the characteristics critical to choosing a pair of astronomy binoculars – but which model to choose? The more thought I applied to this, the more I became unsure and vacillated. 10x50, 9x63 - each viable choices but I wanted to make the best decision for me, the first time around. One evening I looked through a pair of Celestron 15x70 SkyMaster binoculars a fellow Saguaro Astronomy Club member (Steve Coe, BTW) owns and I immediately knew I had found the right pair – aperture, good optics, and value. I also recognized that holding the 15x70’s manually would not be an option. A new quest ensued – to find a tripod up to the task.

The astronomy gods shined upon me and I found a used, 50-year old Davis & Sanford Model B Floating Action tripod in beautiful condition that extends to 93” (yes), is rock solid, and has the capacity to carry 40 lbs. One would be hard-pressed to find a modern day replacement. Being a tad over 6’7” tall, the tripod’s extensibility was a real bonus. I purchased the tripod and received my binoculars soon thereafter.

Utter disappointment. The plastic binocular mount that ships with the SkyMaster exhibited flexure when finger pressure was applied simply mounting it to the tripod. After mounting the binocular, the slightest nudge resulted in watching a star-studded ping-pong match that first evening. Days later, a trip to the local hardware store produced a heavy duty Stanley right angle bracket that I fashioned into a new mount. A quantum improvement in steadiness was realized but the binocular still moved.

At this point, I discovered that finding Vega, hardly a dim star in the sky, was difficult to find using the binocular. One would think it should be easy with a 4.4 degree FOV. This was perplexing, but I could implement a solution that I had read about. I cobbled a dovetail mount to support an $8.84 Daisy Red Dot Finder purchased from Wal-Mart by filing down the second of two angle brackets in the original package, reduced the LED’s output, and finally had a functioning setup. But I knew it could/should be better.

Enter the FAR-Sight mount. I saw mention of this elegant solution in the January 2007 issue of Sky & Telescope as one of their Hot Products for 2007 and immediately knew that it would satisfy my needs.

I ordered the FAR-Sight and it arrived promptly, housed in a well-packaged bolt case – the first manifestation of product quality. “First touch” was a wonderful experience. Constructed of 3mm thick laser-cut stainless steel, the mount is robust and gorgeous to behold. Immediately the fit-and-finish of the mount engenders confidence in its ability to do its job – and, with style. Rounded edges, artfully removed excess weight, precise construction and obvious attention to detail characterize its construction.

The FAR-Sight attaches to a tripod via a standard 1/4”x20 female fitting. A composite material on the underside of the mount assures a firm, non-slip connection to the tripod when the mount is affixed and tightened-down.

The FAR-Sight is comprised of two pieces, the mount itself and a beautifully machined stud that is attached to the binocular. Anxious to see the mount in action, I tried to hand push the mounting stud into the mount’s slot. Unable to engage the parts I noticed there was an apparent issue of square metal faces meeting each other and I was reminded of the Physics Law of Impenetrability – two objects cannot occupy the same space at the same time. Believing the mount was defective; I called Farpoint and spoke with Allan Keller. He reassured me the mount would work flawlessly when actually mounting the binoculars and he was indeed correct.

Allan Keller, FAR-Sight’s designer, is co-founder of both Farpoint Astronomical Research and its parent company Optical Structures, a company that makes telescopes and associated items for the research community. His attention to detail in the mount is readily evident. He crafted the mount for himself and realized others could benefit from it as well. I count myself as one.

The stainless steel mounting stud is firmly hand-screwed into the binoculars’ pivot point and a small hex bolt (wrench included) is then tightened to lock the stud to the binoculars. There is no need to overly tighten the hex bolt. Mr. Keller utilizes a cone washer assembly to provide the clenching tension that holds the binoculars rigidly in place when the stud is pushed down into the mount’s keyhole-shaped slot. A detented locking plate is then swung down to serve as a safety measure.

If the interpupilary distance (IPD) of the binocular needs to be changed to accommodate a second observer, simply apply pressure against the clenching friction and the adjustment can be easily made. I am aware that some binocular mounting stalks, because of their width, can interfere with achievement of the binoculars’ narrowest IPD. While I cannot speak for binoculars other than my SkyMaster, the FAR-Sight mounting stud positions the unit far enough back so the binocular housing clears the mount. Once the mounting stud is fully engaged in the keyhole slot the binocular is held firmly in place without any axial rotation. Additional mounting studs are available for those observers that own multiple binoculars.

A nifty flash presentation can be found at http://www.farpointastro.com/farsight.html that visually depicts how the parts work together.

A quasi-dovetail plate assembly on the top of the mount allows attachment of your red dot finder of choice. After a viewing session, takedown for travel/storage is as easy as rotating the locking plate 90 degrees out-of-the-way, applying pressure, and lifting the binocular off the mount. The safety tab is detented in both the locked and release positions and remains where placed.

The Farpoint Web site relates the FAR-Sight can be installed on a parallelogram-style mount as well – a future implementation that is of high interest to me. I can apply sufficient leverage to easily mount/remove my binocular from my tripod-mounted unit, but the “floating head” of a parallelogram mount does not afford the same leverage points. To satisfy my curiosity, I removed the FAR-Sight from my tripod and found that applying pressure on the large upper head and lower cross-reinforcing piece toward the bottom of the mount serve handily to apply the necessary pressure to install/remove the binocular.

In use, the 11 oz. mount is incredibly stable. Said mathematically: zero flexure = zero dampening time = most pleasurable viewing. When using my FAR-Sight, vibration is no longer part of my binocular mount equation.

To be objective, this review does need a “con” comment to help balance the superlative qualities I have related about this mount. There is one con, and it is truly a micro nit. The silver colored adhesive label, while certainly not shabby, does not bespeak the quality of this mount. Acid or laser-etched lettering to mark the product would complement the quality of this wonderful product.

The FAR-Sight is priced at $64.95, not much more than the cost of some of the elite brand mounting stalks that do not offer comparable rigidity or even the ability to mount a finder unit. Farpoint prices each additional mounting stud at $9.95.

The FAR-Sight is an elegant solution that delivers the best of both worlds: form and function.

4/27/07 update: The only “con” I could relate when I reviewed the FAR-Sight was the stick-on label that most certainly did not reflect the quality of the mount. I have just seen a recently produced piece and the mount is beautifully branded with a black print laser marking. The FAR-Sight has been rendered “con-less.” 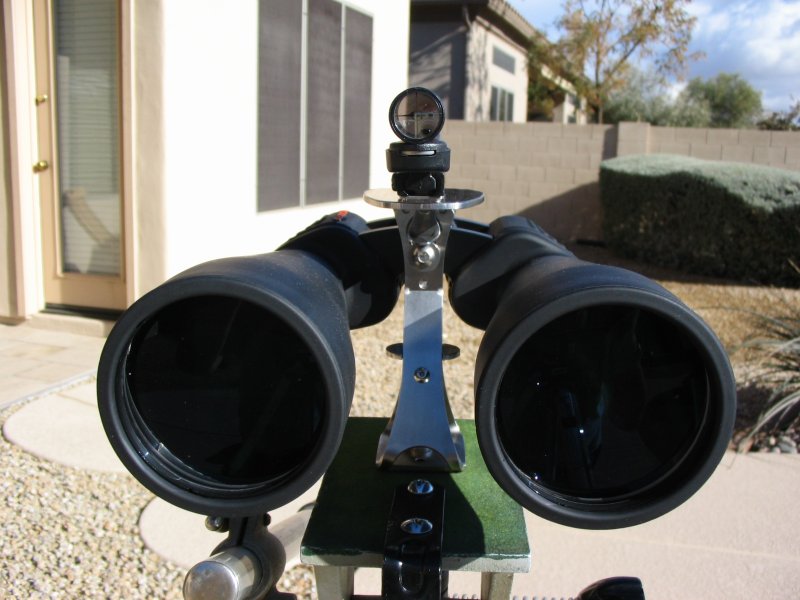