Paramount ME for the Semi-Portable Observatory 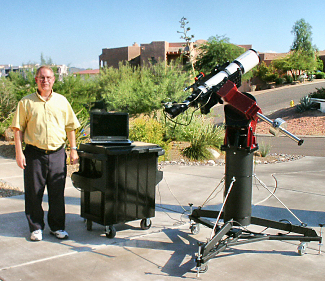 [ARTICLEIMGR="2"]I had always considered the Paramount ME to be impractical for my semi portable application because of its reputation as a mount for the amateur observatory. This was because I believed the mount was too heavy for my AP130 EDFS and because I had grown accustomed to the polar alignment tools found in my Astro-Physics 600E GTO (polar alignment scope, North Polar Calibrate, Meridian Delay feature to set the altitude, etc.). Conversations with Ray York, John Smith, and review of Emails on Yahoo groups helped me think differently about the features of the ME and that this might be a better solution to my semi-portable observatory. These features included zero backlash, elimination of the need to change the counterweight position following a meridian flip, and through the mount cabling. Only one question remained. Could I rough polar align and quickly use TPoint to rapidly set-up the Paramount for astrophotography? I took a “leap-of-faith” on June 6, 2005 and ordered a Paramount ME having convinced myself I could be successful with T-Point.

Pier selection was an important consideration. While there are several portable piers manufactured, I selected an Astro-Physics 10 x 32” portable pier. The features that I liked most about the AP pier was its immediate availability and how it integrated with the JMI Wheely Bars that I already owned. JMI Wheely Bars for AP portable piers have a different design than standard JMI Wheely Bars. These bars have raised connection points that securely surround the feet of AP piers. This was a key consideration as I have to roll the ME out of the garage for every photography session and I did not want to inadvertently knock this expensive mount off the Wheely Bars. After selecting the AP pier, I needed a way to connect the ME. Ray York arranged for a machine shop to construct a plate that fit into the AP pier that also had a hole pattern that allowed me to attach the ME.

Assembly of the Paramount ME, AP Portable, Pier and JMI Wheeley Bars went quickly. In addition to general assembly, I wanted to arrange components in such a way as to minimize set-up time for each observing session. To help accomplish this I used the Paramount’s though the mount cabling feature to run 3 cables: 1) USB for the ST10XME, SBIG’s 5 VDC power supply cable, and a proprietary RJ11 cable for the Starizona Microtouch focuser. The power supply for the camera and the receiver for the Microtouch focuser were attached to the top of the Paramount using Velcro strips. Additionally, I attached the Paramount’s 48 VDC power supply and a 5 outlet power strip with wire ties to the JMI Wheely Bars. All 120 VAC connections for the mount and peripheral components are made via the power strip. These lines are then neatly attached to the pier with wire ties so there are no “dangling” connections. This arrangement allows me to transport the assembly from the garage to the driveway, level the scope, and make 3 connections (120 VAC to the power strip, USB from the camera to the computer, and USB from the Paramount to the computer) in fewer than 15 minutes!

Polar alignment was the last item to be performed. To accomplish this, I locate the mount on the driveway in approximately the same location every time. This is aided by three small circles I have drawn on the driveway for each of the contact points of the Wheeley Bars. Unlike other mounts, the homing sensors of the Paramount allow for absolute positioning of the telescope against the night sky. After homing the mount, I then perform SB’s Quick Polar Alignment routine. This is done by slewing and centering a target on the CCD with elevation and azimuth controls. This sounds more difficult to perform than it is. However, with my ST10XME, the location circles on the driveway and the homing routine, there are few instances where the target star is not somewhere on the chip. The Quick Polar Alignment routine substitutes for sighting Polaris with a polar alignment scope. Furthermore, the Quick Polar Alignment can be performed just after sunset and long before Polaris is visible so that valuable imaging time is not wasted.

Prior to beginning my initial TPoint/Automapper II runs, I slew the mount to a star in the southeast and photograph the region for 3 seconds using CCDSoft. I next select Insert WCS/AutoAstrometry to determine where the telescope is pointing and sync the Paramount. Also, from this photograph I obtain the north angle of the camera and enter this value into the defaults of Automapper II. The north angle is essential for Automapper II to reduce the number of false plate solves. At this point I begin my first TPoint mapping run with Automapper II. Typically, I begin with a 13 point run for stars on the east side of the mount. After completion of this mapping run, I open the TPoint model and add two additional terms (TX and DAF are both highly statistically significant for my set-up) and examine the model for false plate solves. These false plate solves must be eliminated from the model or the polar alignment information generated by TPoint will be incorrect. Next from TPoint I select Polar Alignment Information. This window tells how far off the mount is in elevation and azimuth. With the Paramount’s 2 arc minute/division elevation and azimuth adjustment knobs I am able to precisely adjust the Paramount’s position. After these adjustments are made, I again perform the same 13 point mapping run. The TPoint model is again refined and the polar alignment evaluated. The Quick Polar Alignment and two 13 point T-Point runs are typically completed in 15 minutes. The adjustments made to the Paramount from the second 13 point T-Point run are the last adjustments I make to the mount resulting in a polar alignment that is within 2 arc minutes of north (accounting for refraction). This level of accuracy in polar alignment exceeds what I could do with a drift alignment in twice this amount of time.

I could start imaging at this point, but I usually perform a third and final all sky 60 point T-Point mapping run to improve pointing accuracy. This run takes about 25 minutes. The polar alignment results of this third T-Point run confirm the polar alignment results of the 2nd run of better than 2 arcminutes. I have also confirmed my polar alignment accuracy by selecting a star on the celestial equator and just west of the meridian. Use of CCDOPS Track and Accumulate feature shows no appreciable drift for 5 minutes.

While I recognize that my small TPoint models do not take full advantage of the Paramount’s capabilities like unguided imaging using Protrack, my set-up time has been significantly reduced and my RMS guiding results have been significantly improved. My initial apprehension over making this purchase had been resolved and I am far better off for having made this decision. And when it comes times to get that permanent observatory with a 12.5” RC in a couple of years I will have all the mount I need to handle the load. The Paramount ME has far exceeded my expectations.