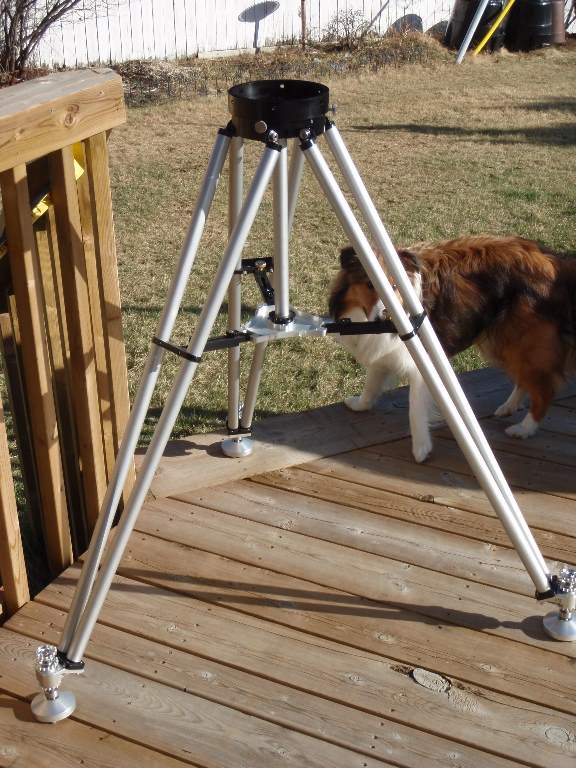 They come in three distinct capacity / size classes, a light TRI36L for AP400/600/Mach1GTO sized mounts, a medium TRI36M for AP900 and AP1200, Paramount MX sized mounts, and a heavy TRI36H designed mainly for the Paramount ME. The standard base leg length is 36 inches although they are available in custom lengths from 26 to 60 inches . Note! All photographs show the tripod configured with the leveling feet, an additional $200 option.

For purposes of clarity, this review will be confined to the light TRI36L. A second review may come later with an emphasis on the TRI36M and further accessories not available at present. 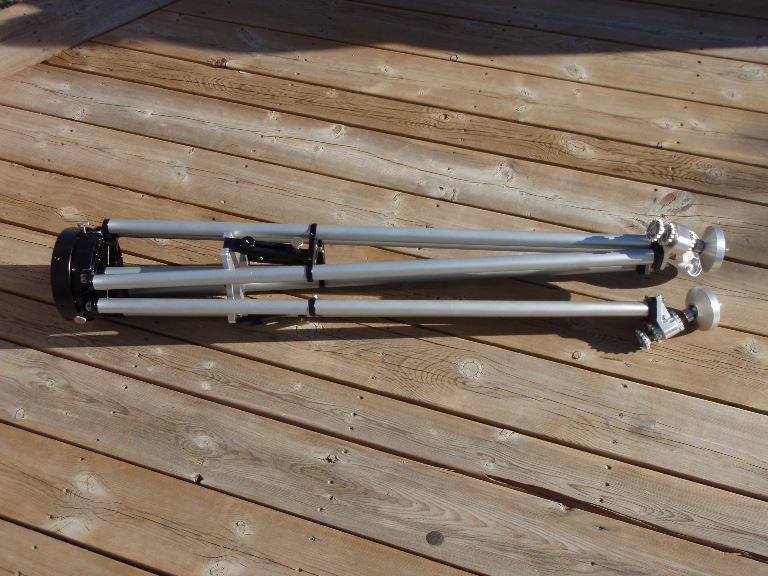 I ordered my TRI36L back in the summer of 2010. Rob had placed an ad for a new series of mounts and the price definitely seemed right. After a short discussion via e-mail with Rob, I ordered and paid for a TRI36L with micro-adjust feet. I figured I would do my part to help things along and maybe get Rob's tripods some more publicity in the process. Planned accessories at the time were micro-adjustable leveling feet, tray extensions, and pier extensions which would allow one to move the mount further above the legs giving some more clearance for the optics package. The tripod might be ready for a star party I was to attend in September. I was ecstatic!

A lot of time passed. The September star party came and went. No tripod - and not a lot of feedback from Rob. While I was getting a little concerned, I figured I had to wait this out, after all, Rob Miller isn't someone who dropped in new with no prior experience. He had a significant hand in the design and build of the Astro-Physics AP1200 and then the AP900. He also had a lot to do with the Bisque Paramount. His name is whispered legend for some of us old-timers. After all, to be associated with these two legendary companies and their highly sought after mounts is nothing short of remarkable.

More time passed, November arrives and suddenly I start getting several more e-mails from Rob. He has moved shop and is building parts for the mounts. All sorts of pictures appear on my computer of incredibly beautiful machined pieces, legs, brackets, plates, pads, and knobs. All sorts of amazing photographs to look at. Discussions about what is happening; how things should work and fit. More pictures and discussions over the next month or two. More of the parts and pieces and finally pictures of completed tripods. They look gorgeous and mine is on the way. It is late January.

When the box arrived, it looked too small. It is too light. I figure Rob must have shipped the legs separately from the top parts so that the packaging would be as small as possible. I was almost going to give him a call and ask when the top would be coming but then I thought I would open up the package and see what I had received. I pulled off a piece of blue foam from under the flaps of the cardboard box and there they were, three leg ends wrapped individually in bubble wrap. I slid the legs out including a box full of foam peanuts and there was another blue foam cap on the other end. Lifting it off I saw that the tripod was whole, the top was there! Seconds later I had the mount fully unwrapped and opened. It was fully anodized 'natural' and black two-tone, just as I had ordered. My first impression, right from the start was how incredibly light this tripod is. It is just over 9 pounds. Light yet solid, incredibly solid. The quality of the machining of the parts is even nicer to see in person than in the multitudes of photographs I had received. My second thought was that it needed feet of some sort. While the machined pads provided do work, and the protruding stainless bolt heads are present to provide some hard wearing surface and friction on rough hard surfaces, and to dig in somewhat on softer surfaces, I still find that some sort of further footpad development is necessary. 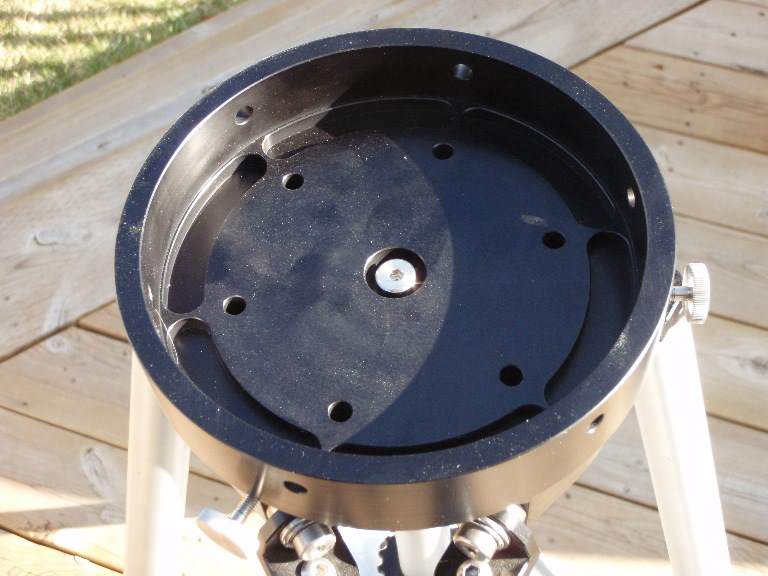 Do I like it? Yes, an oh so emphatic yes! It is incredibly light. It is incredibly rigid, it is incredibly beautiful. It exudes quality workmanship. So just how does the tripod work? Let's have a look starting at the top. The version I received is designed for the Astro-Physics Mach1GTO. Since the Mach1GTO was designed to be compatible with tripods and piers designed for the AP400 and AP600, the TRI36L will accommodate them as well. Some accessories for the Astro-Phyics Eagle tripod-pier can also be used, such as the AP 8 inch Eagle Pier extension. 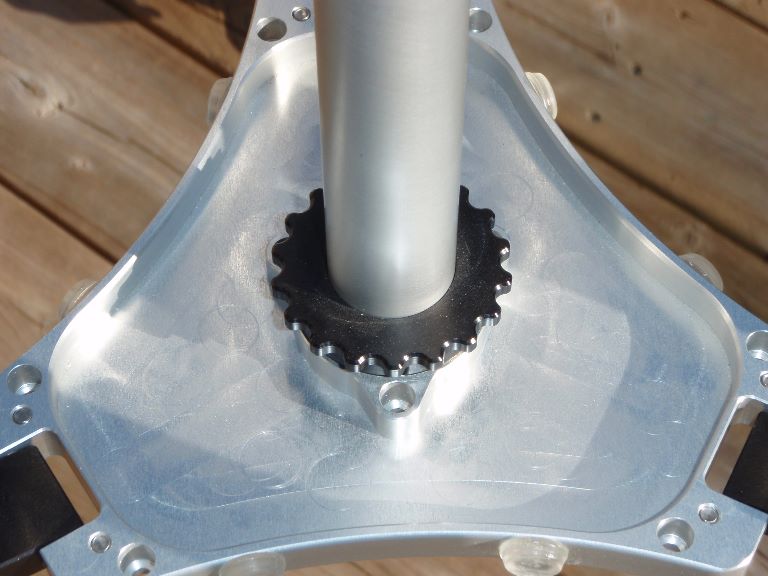 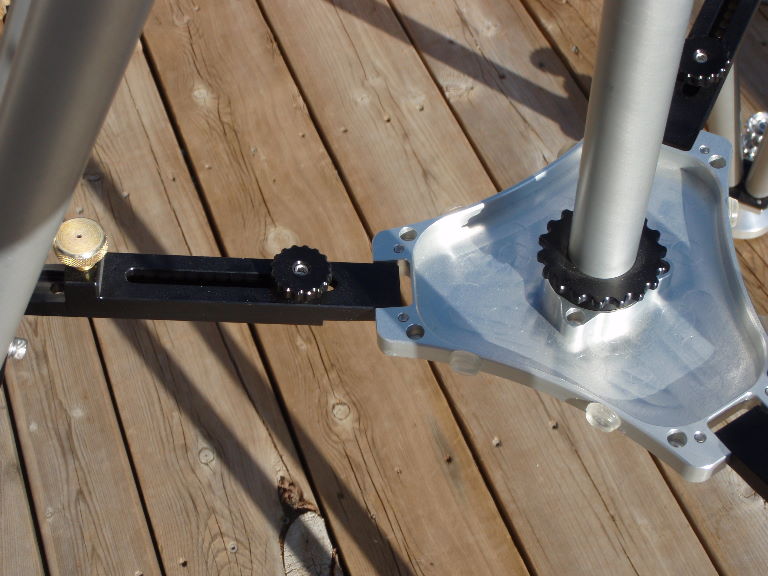 The next major feature to examine is how the spreader bars operate and how the center column locks. To open the tripod from it's closed position, the center column lock must be loosened off by approximately one full turn. To adjust the spreader bars, lift the brass knob on the spreader bars and turn it 90 degrees in either direction, then release. Lifting releases the pin and the turn maintains them in the released position. Slightly loosen the small black lock knob on the spreader bar next to the tray by turning about half a turn. Open the legs and eyeball the tripod top level. Turn the brass knobs back to their original position and they will probably drop the pin into the nearest hole. If the pin doesn't drop, wiggle the spreader slightly and the pin will snap into position. Now it is time to put the mount on the tripod. Once complete, finish off adjusting the leg spread to level the tripod. Turn the small black knobs by finger until they snug up, and finally turn the center column lock-nut clockwise until it is snug. That's it! It is not necessary to tighten it up too much and may in fact make it quite difficult to turn it to loosen later. 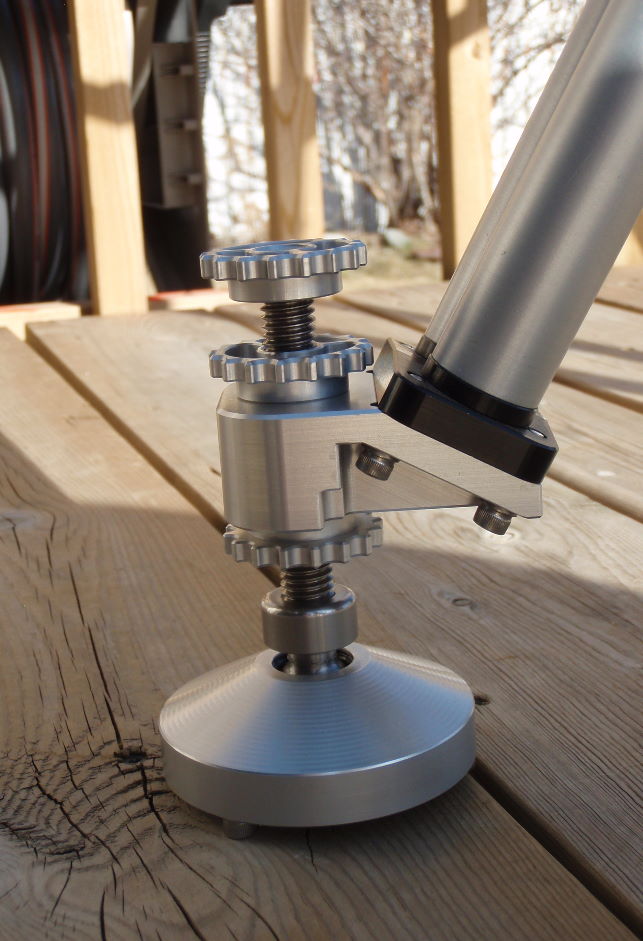 If you have purchased the optional adjustable feet, roughly leveling the tripod is likely all that will be necessary. Any further leveling adjustment can be accomplished via the foot levelers. The foot levelers are attached by removing the four small protruding stainless cap screws in the base of each footpad. Once the cap screws are out, the footpad assembly is placed into position and attached via four somewhat longer stainless cap screws which are supplied with the feet. It is a relatively quick and painless procedure. You must take care not to cross-thread the cap screws in the process. Hopefully you will have purchased the feet with the tripod and they are already in place when you receive it.

Adjusting the feet is very easy. There are two locking rings supplied, one above and one below the rigid thread assembly. Turn the lower one downwards as far as it will go, or you feel is necessary, towards the footpad, and turn the top one up towards the leveling knob on the top of the threaded rod. Turn the top knob in the direction you require, clockwise to raise, and watch the bubble level. Once leveled, turn both locking nuts back into position against the rigid assembly which is attached to the tripod. This will ensure that the footpad is as rigid as possible. On mine, only one of the locking nuts is required but I do both up just to be sure nothing loosens off. If you are imaging, something which may waste a deep long duration frame later due to saving a few seconds is definitely to be avoided.

In use the tripod is quite remarkable. It sets up easily and provides a solid platform for observing. Recently, I received a set of the 'regular' height adjustable feet which I attached for testing purposes. With a 70 pound load on the tripod consisting of my Mach1GTO, an AP130 telescope and counterweights to support a moderately heavy binoviewer with eyepieces, a solid rap on the scope near the focuser would result in a single oscillation which would damp out in under a second. The telescope was set up on grass in my back yard. Had the setup been on a hard surface, damping would likely be even quicker. I feel that the tripod is capable of carrying quite a bit more weight, possibly up to two hundred pounds or maybe more. One of my main concerns with a lightweight tripod is wind loading in combination with a long optical assembly. I am please to say that the tripod has passed muster with several imaging runs and works even better than I expected it to. For maximum rigidity, it must be set up with all knobs finger tight. Excessive force is NOT required and could be quite detrimental in the long term. 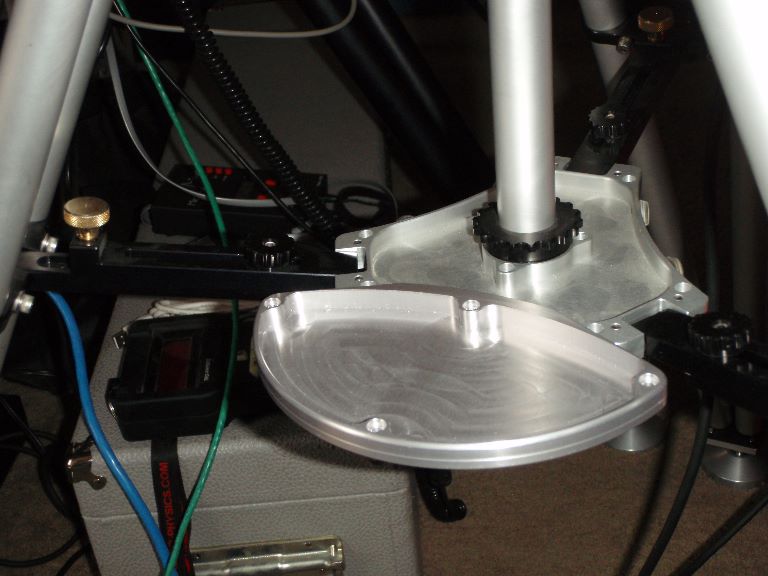 I have been waiting a short period for Rob to make an accessory tray extension so that I could include it in this report. He came through and I now have feet on both my tripods, the TRI36L which is the focus here, and on my TRI36M as well as an accessory tray for each tripod. The tray is best described by looking at a picture of it in place on the central portion of the locking assembly. It quite remarkably just drops into position and stays in place via a curved milled slot in the tray which matches the outer lip of the locking assembly. It looks and feels like a natural fit, simple, self centering, yet very strong, and stable. No tools are required to place it or remove it. It is very safe in position as the tray can only be removed by lifting straight up without any twisting. It would be very difficult to inadvertently knock it off as any sort of accidental off angle lifting would simply lock it in position. While only shown with one tray in place, three will fit to provide room to place multiple eyepieces and other similar sized items. The trays must be removed and stored separately in order to collapse the tripod for transport or storage.

In summary, this is an excellent tripod, lightweight and very capable. In my opinion, while you can use the tripod without the accessory leveling feet, in practice you will enjoy having them. They do add about $200 to the cost of the tripod, which is still a bargain. Some other accessories for the light version of the tripod, still to come, are the precision height adjustable footpads and pier extensions. Another accessory which may be forthcoming is a clamp which fits between the tines of a set of legs to which one can attach the Astro-Physics GTOCP3 control box adapter. For those who are interested in a tripod which can be used with an AP900 or AP1200 AND a Mach1GTO with the addition of an adapter, I would heartily recommend that they look into the medium duty version of this tripod, the TRI36M.

As a final note the tripods are identified by a three letter prefix "TRI" followed by a set of two numbers indicating the length of the legs in inches, followed by a single letter. The final letter indicates the version of the tripod, with the "L" standing for light, "M" for medium and "H" for heavy. The "L" version is the one in these photos and comes with your choice of several included head types. The Mach1GTO is one of them. The medium version is better suited to the AP900 or the new Paramount MX and as a moderate duty support for the AP1200. The heavy version is best suited for the Paramount ME and potentially a heavy support for the AP1200. Whether other mount types are supported directly or via adapters will likely depend upon demand.